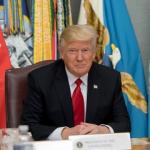 Donald Trump has leapt across the Atlantic Ocean to bring America’s European allies to heel. Or so his Twitter account suggests. In London, an orange effigy will fly above the city in welcome. Massive crowds will gather on Friday to greet him with jeers and boos. Trump has the ability to translate dissent into praise. He will see the crowds and preen. Surely, he is the most important American to set foot in the British Isles.

He will walk through the streets of Brussels, pretending to attack America’s NATO allies. He will wink to his base—telling them that he is being tough on everyone, not just China, but also Germany and France. His base will think that he is their champion, speaking for them in a voice that has not been heard before.

Others will be hoodwinked into the belief that Trump—yes, Trump alone—is somehow changing the terms of the great Atlantic relationship.

But this is all bunk. Trump is a deception. There is no change afoot. The United States will continue to fund European ‘defense,’ which is more accurately characterized as the U.S.-driven attempt to dominate Eurasia (Russia and China). The United States will continue to use NATO as much as possible to drive the agenda of Western-led imperialism. All this, the facts of the matter, will be set aside as the liberals cry out in horror about Trump’s political infidelities. How dare The Donald poke a finger in the ‘special relationship’ with the other colonizers, they say! They are outraged. The colonizers must stay together.

Trump travels with his bludgeon—his Twitter account. He warned before he left for Europe that the Europeans must lift their military spending. This comes before the NATO summit, where Trump is expected to be as testy as he was in the Group of Seven (G7) summit in Canada. Then, Trump provoked a war of words with Canadian Prime Minister Justin Trudeau. Now, he seems to want to get into a war of words with all of Europe.

The Europeans (and the American establishment liberals) fear that Trump will break the Atlantic alliance—the linkage between Western Europe (substantially) and the United States. Old colonial ties and ties reaffirmed through the Group of Seven (G7) process brought the United States into a very tight embrace with France, Germany and the United Kingdom. Much was made during the Bush years of the New Europe (namely, Eastern Europe), but this was not serious. The real Atlantic alliance is between the U.S. (with Canada) and these three major European powers.

It is to this that European Council President Donald Tusk gestured when he said, “Dear America, appreciate your allies. After all, you don’t have that many.” This was a bitter statement. It comes from a former Prime Minister of Poland, who is now disliked in his own country. Tusk has thrown his fortunes into the European project. He worries on behalf of Berlin, London and Paris.

Donald Trump responded lightly. “We have many allies,” he said, brushing off the other Donald’s warning.

The United States—before Trump—and NATO itself had made low military spending in Europe an issue. It was NATO that agreed to the 2 percent of GDP threshold, arguing that each of the NATO member-states must lift their military spending to above 2 percent of GDP. The majority of European countries in NATO—24 of 28—spend well below that threshold. They have no real plans to lift their military obligations.

The 2 percent threshold provides Trump a Twitter-worthy argument. He knows that the U.S. is the largest spender on the military on the planet, and he knows that U.S. allies such as the European states, but also Japan and South Korea, have relied upon the U.S. military umbrella to protect them from threats. The United States spends close to 40 percent of all military spending on the planet. No country in Europe spends near U.S. levels. The United States and the European Union have a comparable GDP. The U.S. spends over 3 percent of its GDP on the military, whereas the European Union spends half that amount.

While Trump fulminates about European military spending, the United States’ overall policy direction and contribution to European warfare has not diminished. It is one thing to go on Twitter to titillate one’s base and quite another to shift the policy.

All U.S. government strategic documents reaffirm the U.S.-European alliance and confirm that the main threats to this alliance are from China and Russia. This is the old game, the attempt to prevent the emergence of any challenges to the Atlantic alliance and the attempt to maintain Atlantic hegemony over decision making on issues of importance, namely trade and development. The most recent such document—the U.S. Secretary of Defense’s National Defense Strategy (February 2018)—makes just these points. The crucial sentence is this: “A strong and free Europe, bound by shared principles of democracy, national sovereignty and commitment to Article 5 of the North Atlantic Treaty is vital to our security.” Article 5 is the commitment made by all NATO members for collective defense.

But is Trump really going to starve NATO and the European alliance? There is no evidence of this. Trump has increased the U.S. military budget by gargantuan amounts—to the near astronomic levels of close to $800 billion (China, the second largest military spender, is at $230 billion). The numbers are at the Stockholm International Peace Research Institute and International Institute for Strategic Studies. Trump increased military spending by close to 10 percent. There is no hesitancy to spend money on the military, no desire to shift some of that treasure toward those who are out of work and desperate. None of that.

Part of this massive military budget—admittedly a small part—has gone toward the U.S.-European Defense Initiative. Trump has raised that amount from $3.4 billion to $6.5 billion. This Initiative is designed as a European and American response to “threats from Russia.” One of the key elements of this Initiative is, as the Comptroller of the U.S. Defense Department notes in February 2018, to “assure our NATO allies and partners of the United States’ commitment to Article 5 and the territorial integrity of all 28 NATO nations.” The next point is more sinister. It speaks of increasing the “capability and readiness of U.S. Forces, NATO allies and regional partners” to swiftly deal with any “regional adversary.” The finger is pointed at Russia. This has been U.S. policy since the unification of Germany, since the desire to move NATO eastwards and since the general consensus in the West to box in both Russia and China to prevent the development of any challenge to Western power.

Trump will make a great deal of noise about the 2 percent threshold and he will be aggressive in public against his European partners. The other Donald, Tusk of the European Council, will take the bait and the media will have a field day. But few will report that beneath this sturm und drang, this tempest, will be the normal, but deeply troubling military alliance of the Atlantic world.

Militaries will be heavily funded, arms dealers will preen, threats will be made to weaker powers, trade treaties will be forced on them, poverty will increase, rhetoric of hate will be normal, and the world will slip into the dark night of barbarism.

Trump will gradually disappear from the stage. So will Tusk. So will Merkel. But other names will remain intact: Lockheed Martin, Boeing, BAE Systems, Raytheon, Northrop Grumman, General Dynamics, Airbus, United Technologies, Leonardo-Finmeccanica, Thales Group, L-3 Communications, Rolls Royce… the smell of war, the putrid smell of a world of war.

Vijay Prashad is an Indian historian, editor and journalist. He is the director of Tricontinental: Institute for Social Research and chief editor of LeftWord Books. He has written more than twenty books, including The Darker Nations: A People’s History of the Third World (2007), The Poorer Nations: A Possible History of the Global South (2013) and Red Star Over the Third World (2017). He writes regularly for Frontline, the Hindu, Newsclick, AlterNet and BirGün.