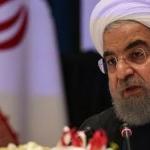 In remarks Saturday to the Iranian foreign policy establishment in Tehran, President Hassan Rouhani gave some warnings to U.S. President Donald Trump. He said, “Mr. Trump, do not play with the lion’s tail. The only result of such a course will be profound regret.”

With regard to Washington’s current attempts to sow the seeds of instability in Iran, he said, “You are not in a position to move against the security and interests of this country, the nation of Iran.”

Critics of the president were astonished at this diction, which echoed Iraqi dictator Saddam Hussein’s description of the Gulf War of 1991 as “the mother of all battles.” (This is actually an Arabic idiom and “mother” could be translated as “essence.” No similar idiom exists in Persian, so Rouhani is speaking a translated Persian form of Dictator Arabic.) Saddam Hussein invaded Iran in September of 1980 and the two fought a major war until 1988. The Iraqi leader was the most hated man in Iran, and to have an Iranian president more or less quote him is shocking, to say the least.

It should be said, however, that Rouhani was not talking about attacking the U.S. In fact, he began by saying that Iran was glad to offer Washington the “mother of all peace.” He went on to say that if Trump instead opted to attack Iran, then that would result in the mother of all wars.

The U.S. press likely will try to turn Rouhani into the aggressor here, however, in a long tradition that goes back to William Randolph Hearst. Soviet Premier Nikita Krushchev once observed in Russian that communism would outlast capitalism and that Soviets would still be around to bury capitalism, which would predecease it.

The U.S. press attributed to him the words, “We will bury you!”—they made a statement of determination and steadfastness, not of aggression. But I grew up believing the falsehood.

Iran signed a treaty with the U.S. in 2015 and observed all its requirements. Trump has torn that treaty up and launched covert operations to destabilize the country. Trump is the aggressor here, and Rouhani was just saying that Iran would defend itself very effectively if attacked.

This is true. Bush’s invasion and occupation of Iraq was the biggest debacle in the history of American foreign policy. Iran is geographically and demographically three times larger than Iraq, so do the math.

Still, Rouhani’s words are most unwise and are, indeed, shocking and shameful.

Speaking of shocking and shameful, Trump, of course, always has to be the biggest dog, so he shouted at Rouhani on Twitter in all caps:

To Iranian President Rouhani: NEVER, EVER THREATEN THE UNITED STATES AGAIN OR YOU WILL SUFFER CONSEQUENCES THE LIKES OF WHICH FEW THROUGHOUT HISTORY HAVE EVER SUFFERED BEFORE. WE ARE NO LONGER A COUNTRY THAT WILL STAND FOR YOUR DEMENTED WORDS OF VIOLENCE & DEATH. BE CAUTIOUS!

Rouhani will note that Trump made similar threats to North Korea and then turned around and staged a love fest. So, who knows, now that Trump has gotten this out of his system, maybe he can move to a rational policy.

Also, note that Rouhani is at a distinct disadvantage here, since Persian has no capital letters.

U.S. Secretary of State Mike Pompeo gave a major policy speech on Iran at the Reagan Library on Sunday. He brought some expatriate Iranians along, who understandably hate the regime that chased their families out of the country. He accused Iran of being ruled by hypocritical clergymen.

So this is the sad note we end on, that Trump has succeeded in his goal of ratcheting up tensions with Iran and putting the two countries on a war footing. How much of this plot was the influence on him of Israeli Prime Minister Binyamin Netanyahu, and of Mohamed Bin Salman of Saudi Arabia and Mohamed bin Zayed of the United Arab Emirates, will only be known years from now.

But to have the U.S. and Iran rattling sabers does not in the least benefit the American people.

Juan Cole is the Richard P. Mitchell Collegiate Professor of History at the University of Michigan and the proprietor of the Informed Comment e-zine. He has written extensively on modern Islamic movements in…
Source URL: https://portside.org/2018-07-24/trump-and-irans-rouhani-threaten-each-other-mother-all-wars