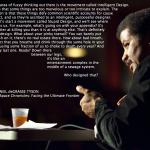 Each year, state legislatures play host to a variety of bills that would interfere with science education. Most of these are variations on a boilerplate intended to get supplementary materials into classrooms criticizing evolution and climate change (or to protect teachers who do). They generally don't mention creationism, but the clear intent is to sneak religious content into the science classrooms, as evidenced by previous bills introduced by the same lawmakers. Most of them die in the legislature (although the opponents of evolution have seen two successes).

The efforts are common enough that we don't generally report on them. But every now and then a bill comes along that veers off this script. Late last month, the Missouri House started considering one that deviates in staggering ways. Instead of being quiet about its intent, it redefines science, provides a clearer definition of intelligent design than any of the idea's advocates ever have, and it mandates equal treatment of the two. In the process, it mangles things so badly that teachers would be prohibited from discussing Mendel's Laws.

Although even the Wikipedia entry for scientific theory includes definitions provided by the world's most prestigious organizations of scientists, the bill's sponsor Rick Brattin has seen fit to invent his own definition. And it's a head-scratcher: "'Scientific theory,' an inferred explanation of incompletely understood phenomena about the physical universe based on limited knowledge, whose components are data, logic, and faith-based philosophy." The faith or philosophy involved remain unspecified.

Brattin also mentions philosophy when he redefines "hypothesis" as "a scientific theory reflecting a minority of scientific opinion which may lack acceptance because it is a new idea, contains faulty logic, lacks supporting data, has significant amounts of conflicting data, or is philosophically unpopular." The reason for that becomes obvious when he turns to intelligent design, which he defines as a hypothesis. Presumably, he thinks it's only a hypothesis because it's philosophically unpopular, since his bill would ensure it ends up in the classrooms.

Intelligent design (ID) is roughly the concept that life is so complex that it requires a designer, but even its most prominent advocates have often been a bit wary about defining its arguments all that precisely. Not so with Brattin—he lists 11 concepts that are part of ID. Some of these are old-fashioned creationist claims, like the suggestion that mutations lead to "species degradation" and a lack of transitional fossils. But it also has some distinctive twists, like the claim that common features, usually used to infer evolutionary relatedness, are actually a sign of parts re-use by a designer.

The bill eventually defines "standard science" as "knowledge disclosed in a truthful and objective manner and the physical universe without any preconceived philosophical demands concerning origin or destiny." It then demands that all science taught in Missouri classrooms be standard science. But there are some problems with this that become apparent immediately. The bill demands anything taught as scientific law to have "no known exceptions." That would rule out teaching Mendel's law, which has a huge variety of exceptions, such as when two genes are linked together on the same chromosome.

But the intent of the bill becomes crystal clear a bit later when it turns to evolution:

If scientific theory concerning biological origin is taught in a course of study, biological evolution and biological intelligent design shall be taught. Other scientific theory or theories of origin may be taught. If biological intelligent design is taught, any proposed identity of the intelligence responsible for earth's biology shall be verifiable by present-day observation or experimentation and teachers shall not question, survey, or otherwise influence student belief in a nonverifiable identity within a science course.

In other words, equal time for the leading scientific idea and intelligent design, but never mention who the designer might be. And not just equal time, but equal pages; the bill literally mandates that "course textbooks contain approximately an equal number of pages of relevant material teaching each viewpoint." Brattin is at least aware no textbooks actually have anything on "biological intelligent design," so he wants the state to identify "nine individuals who are knowledgeable of science and intelligent design" to create supplementary materials for use until the textbook publishers get in line.

Given this confused mess, the bill probably has very little chance of passing. Still, prior to the passage of the Louisiana Science Education Act, it seemed unlikely any of these bills would become law.