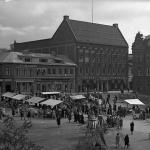 On 15 September 1918, a 12-year-old boy named Karl Karlsson who lived just outside Östersund, Sweden, wrote a short diary entry: “Two who died of Spanish flu buried today. A few snowflakes in the air.”

For all its brevity and matter-of-fact tone, Karlsson’s journal makes grim reading. It is 100 years since a particularly virulent strain of avian flu, known as the Spanish flu despite probably originating in America, ravaged the globe, killing somewhere between 50 million and 100 million people. While its effects were felt everywhere, it struck particularly hard in Östersund, earning the city the nickname “capital of the Spanish flu”.

“Looking back through contemporaneous accounts was quite creepy,” says Jim Hedlund at the city’s state archive. “As many people died in two months as generally died in a whole year. I even found out that three of my forbears were buried on the same day.”

There were three main reasons why the flu hit this remote city so hard: Östersund had speedy railway connections, several army regiments stationed in close quarters and a malnourished population living in cramped accommodation. As neutral Sweden kept its armed forces on high alert between 1914 and 1918, the garrison town’s population swelled from 9,000 to 13,000.

By 1917, when navvies poured in and construction started on an inland railway to the north, widespread food shortages had led to violent workers’ demonstrations and a near mutiny among the army units.

The city became a hotbed of political activism. Its small size put the unequal distribution of wealth in early industrial society under the microscope. While working-class families crowded into insalubrious accommodation, wealthy tourists from other parts of Sweden and further afield came for the fresh mountain air and restorative waters – as well as the excellent fishing and elk hunting (passionate angler Winston Churchill was a regular visitor).

“Many of the demonstrators’ concerns seem strikingly modern,” says Hedlund, pointing to a copy of a political poster that reads: “Tourists out of our buildings in times of crisis. Butter, milk and potatoes for workers!”

It wasn’t just the urban proletariat demanding better accommodation. At Sweden’s first ever national convention of the indigenous Sami peoples held in Östersund in early 1918, delegates demanded an end to discriminatory policies that forced them to live in tents.

Social inequality in the city meant the Spanish flu hit all the harder.

As the epidemic raged in late August, when around 20 people were dying daily, the city’s bank director Carl Lignell withdrew funds from Stockholm without authorisation and requisitioned a school for use as a hospital (the city didn’t have one).

“If it hadn’t been for him, Östersund might quite literally have disappeared,” says Hedlund. For a brief period, Lignell worked like a benevolent dictator, quarantining suspected cases in their homes – and revealing the squalor in which they lived.

As his hastily convened medical team moved through Östersund, they found whole families crowded into wooden shacks, just a few streets away from the proud, stone-built civic structures. In some homes, sick children lay on the floor for want of beds.

The local newspaper Östersunds-Posten asked rhetorically: “Who would have thought that in our fine city there could be such awful destitution?”

People of all political convictions and stations in life started cooperating in a city otherwise riven by the class divisions of early industrial society. Östersunds-Posten itself moved from simply reporting on the epidemic to helping to organise relief, publishing calls for money, food and clothing, and opening its offices for use as storerooms.

The state had proven itself inadequate, as historian Hans Jacobsson wrote: “The catastrophic spread of the Spanish flu in 1918 was in no small part down to the authorities’ bewilderment and often clumsy reactions.”

He cites the fact that Stockholm High Command refused to halt planned military exercises for weeks, despite the fact that regimental sickbays were overflowing. “What is interesting is that, after the epidemic, the state dropped investigations against Lignell and made tentative steps towards a cooperative approach to social reform. Issues such as poor nutrition and housing were on the political agenda,” says Hedlund. Anyone trying to date the inception of Sweden’s welfare state cannot overlook the events of autumn 1918.

One hundred years on, there are few better places than Östersund to see the effects of Sweden’s much-vaunted social model. The city is once again growing rapidly, but nothing could seem further away than epidemics and political radicalism. The left of centre Social Democrats have been in power in city hall since 1994, and council leader AnnSofie Andersson has made housing a priority – new developments are spacious, well-ordered and equipped with schools and playgrounds.

“There’s nothing that shows confidence like building stuff,” she says. “In fact, our local authority building partnership should, in my view, keep a small excess of flats in hand, because without a reserve people won’t move here.”

Östersund attracts a net inflow of people from southern Sweden. “It’s partly a quality of life issue,” says Andersson. “You can drop your kids off at kindergarten in the morning on the way to work and be out hiking or skiing by late afternoon.”

The city has recovered from the relocation of the Swedish armed forces fighter jet squadron in the 1990s by playing to its strengths: sports and tourism. A university now occupies the old barracks with a special focus on sports materials and technology. The airbase has become a thriving airport, handling half a million passengers a year.

Despite the net inflow of working-age people however, Östersund is facing a demographic challenge as baby boomers begin to retire. The shortages are being felt most acutely at the regional health authority, which occupies the Epidemisjukhus – the building hastily converted into wards during the Spanish flu by Carl Lignell. Clinical staff are proving hard to find and retain, and the region’s health service is underfunded. Some residents still suggest solving that lack of funding from central government “the Jämtland way”, like Lignell once did

History doesn’t repeat itself identically, though. Sweden’s consensus-orientated political model now tends to defuse conflict even in proud cities with a liking for mavericks. One of Andersson’s strategies for dealing with the approaching lack of labour, for instance, is cooperating with local and national institutions to train up the young refugees the city has welcomed since 2015.

“School starts tomorrow – for the last time,” confides Karl Karlsson to his journal on 4 September 1918. “I leave in spring and it feels melancholy. I like farming, but I would still prefer to continue at school and study. But it’s impossible.” Ten days later, he notes that his family’s food stores are running low. “We’re almost out of flour and bread, the barley hasn’t dried yet, and we shan’t get any more rations, everything is being requisitioned.”

One hundred years later, a city – and a society – once unable to educate or even feed its youth is now one of the world’s wealthiest and fairest.