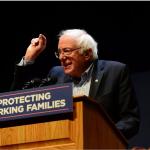 Sen. Bernie Sanders, hero of the left and a widely rumored 2020 presidential contender, is showing he won’t back down from powerful corporations like Amazon. If companies won’t pay their employees a living wage, Sanders argues, the government should recoup the cost of providing government services through a specific tax.

Sanders is partnering with prominent House progressive Rep. Ro Khanna (D-CA) on the Stop Bad Employers by Zeroing Out Subsidies (Stop BEZOS) Act, which would enact a tax on large corporations equal to the federal benefits their low-wage employees receive in order to make ends meet. Companies such as Amazon, Walmart, and American Airlines will have to pay every dollar in aid their workers get from the government back through taxes.

The bill’s goal is to curb so-called “corporate welfare” — part of an ongoing battle Sanders has been waging against corporations more broadly — but Amazon has been in his crosshairs of late. He hosted a worker town hall in July and last month put together a petition to demand Jeff Bezos implement better working conditions and pay. Last month, he also set up a web portal for employees to share their experiences, prompting Amazon, in an unusual move, to respond.

Sanders’s office says they’re not picking on Amazon, per se. “We don’t want to think of it as targeting Amazon,” Sanders spokesman Josh Miller-Lewis said. “Jeff Bezos is the wealthiest person in the history of the world, and Amazon as of [Tuesday] is a $1 trillion company. They are the perfect example of the inequality and greed that exists in America today.” Amazon declined to comment on Sanders’s proposed legislation on Wednesday.

Sanders is landing on an interesting point of tension for the Democratic Party. Amazon remains one of the most popular corporations in America and in particular is popular with a subset of the Democratic base — but so is asking corporations to step up on paying the necessary price for expanding the social safety net, especially if it’s one their employees used.

“In some sense, [Sanders’s] critique is not big enough,” Matt Stoller, a fellow at the Open Markets Institute and a vocal part of the left, told me. “It’s a basic abuse of power problem, and Bernie is shining a light on one part of it, but it’s not the whole thing.”

It’s also an idea that, though it sounds popular, makes some worry about potential negative effects, including fewer jobs. It could speed up automation or incentivize companies to find ways around the tax by changing their business structures to be excluded from it.

In a Republican-controlled Congress, Sanders’s bill is unlikely to gain any traction at the moment. But he is laying down his opening bid for how corporations should be asked to participate in his mission of broadly expanding the social safety net.

The Stop BEZOS Act says for every dollar of federal assistance a worker gets, the company that employs them will be taxed that amount

Sanders and Khanna’s bill would require large companies — defined as those employing 500 or more workers, including part-time and franchise workers and independent contractors — to pay the costs of federal programs their employees use. It would impose a 100 percent tax equal to the amount a company’s workers receive in federal benefits from the Supplemental Nutrition Assistance Program (SNAP), Medicaid, the school lunch program, and Section 8 housing.

The idea, essentially, is that instead of American taxpayers footing the bill to help workers make ends meet, companies would have to, at least via their tax bills. Basically, it’s saying companies have to pay either way — they either have to provide workers a high enough salary that they don’t qualify for those benefits, or they’ll have to pay the government back.

How the Sanders/Khanna legislation would be implemented is not clear. Sanders’s office says that the IRS would have to consult with the United States Department of Agriculture, Department of Housing and Urban Development, and the Centers for Medicare and Medicaid Services to issue regulations to make it work. They haven’t offered more specifics.

Sanders is likely responding to a collection of problems found by economists recently: A 2015 Berkeley study shows that low wages cost US taxpayers $152.8 billion annually in public support; wages are growing more slowly than they have historically; and hourly wages, adjusted for inflation, dropped by 0.2 percent in July. And a recent Urban Institute surveyfound that, last year, 40 percent of American families struggled to meet at least one of their basic needs, including buying food, paying medical bills, or covering utility bills, rent, or mortgage.

Sanders is tapping into an idea a lot of Democrats on the populist left have had: The economy isn’t working for everyone. If corporations aren’t going to pay their employees enough, they’ll pay the government.

Sen. Sherrod Brown (D-OH) earlier this year introduced legislation that would charge companies a “freeloader” fee if their employees depend on government aid like food stamps. Last year, Khanna introduced a similar bill to the one he and Sanders presented on Wednesday, called the Corporate Responsibility and Taxpayer Protection Act.

“The basic message of this bill is billionaires should get off welfare, but it is an attempt to expose the way that our economy works,” Miller-Lewis said.

The idea doesn’t get rave reviews from economists

The idea has clearly gained currency in the Democratic Party, but some economists worry about the broader effects.

There are some potential flaws in the legislation. It assumes that low-wage workers are the principal group receiving public assistance, but there are plenty of middle-income Americans who rely on the social safety net as well. The bill could also discourage companies from hiring people they believe might need federal government assistance, or accelerate the transition to a more automated workforce.

“Right now, there is a kind of tacit social bargain that the public sector will cooperate with the private sector to maintain … a lot of low-wage jobs, which if the private sector had to pay full freight for a living wage might disappear,” said William Galston, senior fellow in governance studies at the Brookings Institution. “Is that a good thing or a bad thing?”

Greg Daco, an economist at Oxford Economics, told me that he doesn’t believe the legislation would have a large effect on the economy as a whole, but on a smaller-scale basis, it might have a negative effect. “The tax would create a dead weight loss, and would cause businesses either to seek ways to circumvent the penalty, or improve productivity and replace lost labor cost,” he said in an email. “This could actually lead to a negative feedback loop for workers.”

Essentially, companies would find ways around the tax, or they’d cut jobs.

Bruce Meyer, professor of public policy at the University of Chicago, echoed the skepticism. “I am skeptical that raising the cost to successful firms of hiring more employees is a good idea,” he said.

Ultimately, the bill is a way to deliver a message — and to continue the clash between Sanders and Amazon.

The Bernie versus Bezos battle is likely to rage on

Sanders has been on quite a tear with regard to Amazon and Bezos in recent months. When employees used the company’s annual Prime Day to speak out about worker conditions, he expressed solidarity with them. He hosted Amazon workers at his CEOs vs. Workers Town Hall in July, and his team has produced multiple videos featuring Amazon employees telling their stories.

In August, Sanders sent out an email to his supporters asking them to join forces against Amazon, and he launched a petition to call on Bezos to pay workers a living wage and improve working conditions. It’s received more than 100,000 signatures. He’s also asking workers to share their stories about Amazon on his Senate website.

Sanders has attacked Amazon over its low median wage — $28,446 — and how it stacks up to Bezos’s net worth of $167 billion. “Instead of attempting to explore Mars or go to the moon, how about Jeff Bezos pays his workers a living wage?” Sanders asked in his August email to supporters.

Amazon, which has largely ignored President Donald Trump’s criticism of it and of Bezos, has fired back at Sanders. In a blog post last week, it rebutted many of his claims, including saying that its median US salary is actually $34,123.

Employee wages and Bezos’s wealth are only part of the broad concerns about Amazon and the role it plays in the US economy. Amazon’s sheer size and scope has raised concerns about potential antitrust issues and whether it’s headed down a path where it will eventually tax every part of Americans’ lives.