The Rise of the Zombie Small Businesses 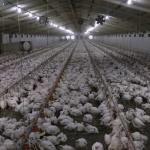 Imagine the farm that raised the chicken that produced the meat that sits in your sandwich: a few workers, thousands of birds, tens of thousands of pounds of white and dark meat, work that starts before dawn and ends after dusk, uncertain revenue, slim profits. There are thousands of these small farms in the United States, and they benefit from millions of dollars of taxpayer support each year.

Chicken is America’s favorite protein, after all. Family farms are one of its most prized institutions. And farming is tough business. According to one estimate, a new, hangar-like chicken house costs something like $300,000 to build, and more to maintain and upgrade. “A farmer has to invest over $1 million just to get set up—a lot of debt to carry when you’re paid on average between 5 cents and 6 cents per pound of chicken produced,” Sally Lee of the Rural Advancement Foundation International-USA has found. Even when a chicken-growing operation is established, financial success is far from a sure thing. Given those realities—and given the American love for and support of the family farm—generous taxpayer subsidies seem not just sensible, but vital.

But a government report released this spring calls into question whether all those family chicken farms are really family chicken farms, and whether those taxpayer dollars might be better spent elsewhere. The Small Business Administration’s inspector general looked at poultry growers, and found that many of them are tied-and-bound contractors—so controlled by their agreements with giant food corporations that they no longer act like independent entities. Why offer them taxpayer support meant for the little guy?

“The farm is not a real family farm, but a cog in this larger industrial-agriculture model,” said Joe Maxwell, a fourth-generation farmer and the executive director of the Organization for Competitive Markets. “This is a heavily concentrated marketplace with a vertically integrated model. That denies the consumer an independent market, and it extracts wealth from the independent farmer.”

The paper has caused controversy and concern in the poultry world, with farmers worried that Uncle Sam might withdraw financial aid, members of Congress looking into lending practices, and poultry businesses pushing back against the government findings. There are broader ramifications, too. In sectors across the economy, from defense contracting to pizza delivery, a handful of firms have amassed and are exerting similar kinds of market power. Economists and policy experts believe that Goliath controlling, contracting, and acquiring David is a key factor driving the country’s anemic growth rates, sluggish productivity numbers, and stark income inequality.

The Sunday roast chicken on your dining table might have come not from an independent grower, but from a zombie arm of a giant corporation. That chicken-salad sandwich in your lunch bag might have come from an agribusiness leeching taxpayer support for small farms. And that bucket of spicy fried might contain within it a lesson about why your paycheck is so small.

Between the retraction of labor law and the decline of antitrust enforcement, “you’ve got a regulatory black hole in which a powerful company can exert total control with no responsibility,” said Marshall Steinbaum, the research director at the Roosevelt Institute. “Between the Amazons of the world and the Ubers of the world and the chicken farmers, when you step back and look at it, you think, ‘Oh wow, this is not an isolated thing. This is actually a big thing.’”

Much of the chicken that ends up on your plate comes from one of a handful of big businesses, such as Tyson and Perdue. The big company provides the chicks. The contract farmer raises them into chickens. The big company slaughters them for meat. It packages and brands that meat under one of dozens of labels. And it sells it cheap to the American consumer.

The issue, the Small Business Administration report found, is the level of control that the integrated poultry company exerts over the farmer. These big operations do not act like department stores, choosing goods from a broad variety of vendors and fostering competition and innovation. They instead act like a lord with serfs, or a landowner with sharecroppers.

The big chicken producers argue against that characterization. “The situation is no different than any other small business that enters into a contractual relationship to provide services to a larger company,” said Tom Super of the National Chicken Council, a trade group, in an email. “These loans, approved by the federal government, go directly to small, independent family farms in rural America which has allowed people to start their own businesses, expand or diversify their farm operations, create jobs, and stay and work on their farms with their families. If anything, the government should be doing more, not less, to drive growth and opportunity in the rural economies that feed America and the world.”

But farmers have complained about and litigated against such contractual relationships for years. “The company has 99-and-a-half percent control over the grower,” said Jonathan Buttram, the president of the Alabama Contract Poultry Growers Association and an outspoken critic of the industry. “I’ll list what they tell you: what time to pick up the chickens, what time to run the feed, what time to turn the lights off and on, every move that you make. Then, they say we’re not an employee—we are employees, but they won’t let us have any kind of benefits or insurance.”

Yet for all the control the poultry businesses have over the farmers, the farmers maintain significant financial and legal risk. They have little job security. They can get dumped for a different supplier, and face a tournament-style system that pits them against fellow growers. They are responsible for financing their own operations, and face the persistent threat of foreclosure.

Buttram said that he worried about the safety and health of the birds being produced for slaughter, many of which live lives of constant sickness and pain. “They pack these chickens in these houses so tight,” he said. “It's nasty. It is hard to see.” He described farmers being instructed to dig pits to dispose of thousands of diseased chicken carcasses.

The system also takes an extraordinary toll on the contract growers themselves. The work is hard, the trade uncertain, the remuneration sometimes scant. Mental and physical health problems are common. “Back a few months ago, a grower called me and said he was going to kill his broiler manager and kill himself,” Buttram told me. “I never thought that I would have to be talking people out of committing suicide or committing murder. It shouldn't be that an entity can coerce you into committing suicide when you have put everything on the line—your mortgage, your farm—and the company has nothing invested in it but a few chickens.”

The meat of the issue, experts said, is growing market concentration. If, as a farmer, you are not going to raise chickens for one of the big players, who are you going to raise them for? How are you going to get them to market? How would you ever get a loan? According to USDA data, about 20 percent of of growers report that there is only one integrator in their area, with another 30 percent reporting that there are only two.

The industry is highly concentrated by many other measures. “Where there were once 1.6 million independent farms across the country, a rapid shift to a vertical-integration model has resulted in just 25,000 contract farms raising the vast majority of America’s poultry,” Representative Nydia Velázquez of New York noted at a hearing the House Small Business Committee held on the report in April. Most broiler chickens in the United States come from operations that process more than 500,000 birds a year.

An estimated three-quarters of industries have seen a substantial increase in market concentration in the past two decades. There were about half as many publicly traded companies in 2014 as there were in 1997, a decline “so dramatic that the number of firms these days is lower than it was in the early 1970s, when the real gross domestic product in the U.S. was just one third of what it is today,” researchers have found. Those public companies are three times as big as they were in the 1990s.

Economists and policy experts argue that the rise of big businesses is having a number of harmful effects on the economy. For instance, increasing concentration seems to be stifling innovation. Market-dominant players might dampen innovation by buying up their smaller, leaner, and more creative competitors; by patent-trolling; and by signing contracts with suppliers and clients that in effect black-ball their competition out of the market. The end result? Higher profits for the few, and a slower and less dynamic economy for the many.

That lack of competition sometimes leads to higher prices for consumers as well, economists argue. For instance, researchers have found “clear instances” where agribusinesses have used their market power to jack up prices. “The four producers of lysine, a key ingredient in animal feed, were able to raise prices by amounts ranging from 40 [to] 70 percent,” one study found. “The government’s attempts to induce competition among the three makers of infant formula are just as striking; the federal Women, Infants, and Children (W.I.C.) program, which purchases about half of the infant formula consumed in the United States, pays wholesale prices for formula that are one fifth the wholesale price offered to non-W.I.C. buyers.”

The growing power of big firms also might be suppressing wages and increasing inequality, experts think. Having fewer businesses around reduces the ability of workers to hopscotch between companies in search of greater wages. It increases the chances that employers might collude to keep wages low or to prevent their talent from getting poached. Local labor markets with fewer and less competitive employers show a 17 percent decline in posted wages, one recent study found. That wage suppression helps to drive income inequality, as does the excess profitability of firms in less-than-competitive industries. Firms in more concentrated industries have “enjoyed higher profit margins, positive abnormal stock returns, and more profitable [merger] deals.”

What to do about it? Policies aimed at increasing competition across industries might be best, helping everyone from the family farmer, to producers struggling to meet big-box stores’ demands, to consumers sapped for choice, to workers hurt by falling real wages. Enforcing antitrust law, forcing huge companies to split apart, barring mergers, strengthening labor standards, targeting patent trolls, and barring exploitative contract practices: Such government actions would not just help the growers Buttram works with or the farmers Maxwell represents, but everyone else in America, too.