If There Are No Refugees, There Will Be No One to Return: Understanding Trump’s War on UNRWA and Palestinian Refugees 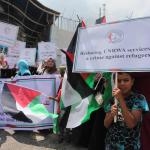 NOTE:  Since this article was written, the Trump administration has cut all funding to UNRWA.

The Trump administration has pledged full funding to an oft-maligned UN relief agency for Palestinian refugees… Nikki Haley, the US ambassador to the United Nations, has privately assured the UN Relief and Works Agency, or UNRWA, that the United States… will maintain its current levels of funding to the organization…. Haley has emerged as an unlikely champion of UNRWA.

The intervening year has been a race of power against protest.

Gazan Palestinians protest in order to be seen and heard, resisting the blockade and claiming their rights.

Trump and those around him have spent the year trying to obviate – rather than solve – Palestinian claims.  Now they wish to deny the refugee status of 90% of Palestinians. If Trump has his way, only a few elderly refugees will remain.  The Right of Return will be moot. It would not exist now, he says, if UNRWA didn’t keep it alive. He will make the right disappear by de-funding UNRWA and de-registering its five million phantom refugees – or, rather, five million descendants of a number of actual refugees.  After seventy years, it’s time for the descendants to disperse quietly.

Once that is done, return can remain the privilege of Jews – or, rather, of the descendants of Jews.  Our claims have somehow not been diluted by our millenia of dispersion.

In December, 2017, Trump gave away what was not his, declaring Jerusalem to be the capital of Israel only.  There was anger, but the sky did not fall on Trump and the messianic segment of his base. International law and global understandings were rather easily ignored.

Foreign Policy would later quote from internal emails that had been sent by Trump’s son-in-law, Jarod Kushner, in January, 2018.  Trump may be transactional, but Kushner is not. Already then, Kushner was calling for an “honest and sincere effort to disrupt UNRWA… our goal can’t be to keep things stable…. Sometimes you have to strategically risk breaking things.”

State Department spokesperson Heather Naert said at the time that the US had no intention of eliminating funding for Palestinian refugees …  But the following day, Victoria Coates, a senior advisor to [President Trump’s Middle East envoy, Jason] Greenblatt, sent an email to the White House’s national security staff indicating that the White House was mulling a way to eliminate the UN’s agency for Palestine refugees.

In February, they went for UNRWA’s budget.  Trump failed to deliver on roughly $300 million of US commitments to UNRWA.  UNRWA would already have programmed those funds to provide food, health care, education and services to 5.3 million Palestinian refugees.  Trump tossed humanitarian obligations on the trash heap with international law and diplomacy.

Gazans began to march, and IDF snipers began to shoot them for the crime of walking while Palestinian.  Nothing stopped them, not the loosening of the IDF open-fire policy and not Netanyahu’s escalating punishments.  The violence and the loss of life have been grossly one-sided:  Israeli soldiers have killed 171 protestors as of this writing, while one Israeli has been shot.  Israeli jets have bombed to the very edge of war, in response to incendiary kites.

Still they march.  There is talk of an economic response to Gazans’ humanitarian need, but not of a solution derived from justice.  So Gaza’s protests continue. If it’s Friday, Gazans will be walking, making themselves visible and demanding precisely those rights that are not under discussion.

Gaza’s protestors brought the Right of Return back into focus – as a threat, not as the basis for resolution.  As I have written elsewhere, UNRWA presented an oblique target:

Gaza’s Great March of Return has reinvigorated a specious argument against UNRWA:  by upholding Palestinians’ rights as they are written into international human rights law and UN resolutions, UNRWA’s very existence is said to perpetuate the conflict.

[Proponents of this argument write that] “UNRWA has succeeded in concealing its political raison d’etre of sustaining the Palestinian demand for ‘return’ designed to undo Israel, and it has done so under a humanitarian guise.”   Because UNRWA defines Palestinians as refugees, it prevents them from adjusting to their new reality as Gazans.  Thus UNRWA – not the blockade and not repeated bombardments – is impeding Gaza’s development….

Make no mistake, though; UNRWA is only the apparent object of this argument.  Its real aim is to legitimate the status quo and eliminate the refugee issue entirely.  By removing UNRWA, these authors hope to make the present distribution of power and land permanent.

With its single-issue focus, UNRWA is humanitarian evidence of the ongoing occupation of Palestine.  In addition, UNRWA consolidates and responds to the needs of Palestine refugees as one people in several locations.  It is not their leader, nor their representative and certainly not their thought leader; but UNRWA is a bureaucratic embodiment of Palestinians’ unified wait for justice.  That makes UNRWA a gratifying straw man.

The UN General Assembly votes every three years on UNRWA’s mandate, and 164 member states voted in favor of its current renewal.  Trump cannot bully all of them, as was made evident in December 2017, when 128 member states opposed Trump’s unilateral gifting of Jerusalem.  Instead, Trump, Netanyahu and friends have worked hard to de-legitimize UNRWA.

Similarly, Trump can not erase UN General Assembly Resolution 194 (III), which resolved that

refugees wishing to return to their homes and live at peace with their neighbours should be permitted to do so at the earliest practicable date, and that compensation should be paid for the property of those choosing not to return and for loss of or damage to property

So instead he, his friends and family have begun work to disqualify the Palestinians who claim their Right of Return.  On what basis?

Their case rests on the belief that the descendants of first-generation refugees cannot qualify for refugee status.  Palestinians, they claim, are the only refugees in the world who pass on their refugee status through the generations.  The view is not shared by the UN High Commissioner for Refugees (UNHCR), and the [US] State Department, which maintain that multiple generations of Afghan, Bhutanese, Burmese, Nepalese, Thai, Tibetan, and Somali people have been recognized as refugees.

This is common sense as well as policy.  How else should one name a child born in a refugee camp, behind a blockade wall?   She has been born into her parents’ displacement. Dispossession determines her choices.  She is unprotected in a world of states, and she must be counted in order to receive aid in a world of agencies.  She is a Palestine refugee, with human and political rights.

Jay Sekulow, an anti-Palestine activist who also happens to be Donald Trump’s personal attorney, explains why he insists that this child has no rights:

The 1951 refugee convention has a lengthy definition of refugee that is personal: A refugee is a person who “owing to well-founded fear of being persecuted for reasons of race, religion, nationality, membership of a particular social group or political opinion, is outside the country of his nationality and is unable or, owing to such fear, is unwilling to avail himself of the protection of that country.” In registering refugees on this basis, the UNHCR interprets the convention as requiring “family unity,” and it implements the principle by extending benefits to a refugee’s accompanying family, calling such people “derivative refugees.” Derivative refugees do not have refugee status on their own; it depends on the principal refugee. UNRWA’s definition is also personal: Palestinian refugees are “persons whose normal place of residence was Palestine during the period 1 June 1946 to 15 May 1948, and who lost both home and means of livelihood as a result of the 1948 conflict,” but it also registers “descendants of Palestine refugee males, including adopted children.” The status for descendants is not dependent upon accompanying the principal refugee.

Here is where the sleight of hand comes in: Of course it is possible for there to be multiple generations of refugees, if the multiple generations all fit the primary 1951 definition of a refugee. For example, if the granddaughter of a refugee is also outside the country of her nationality due to a well-founded fear of being persecuted, she too is a primary refugee. But she is not a refugee due to descent, because there is no provision for refugee status based on descent in the 1951 refugee convention or in internationally accepted practices for refugees who are not Palestinian refugees.

Therefore, a Palestinian child (whose antecedents were dispossessed before the 1951 convention on refugees) is born with no rights.

According to Foreign Policy, Sekulow sued the State Department to obtain a 2015 report which he hoped would contain the number of first-generation Palestine refugees.  No number was evident on the redacted report. Moreover, “the declassified sections of the report provide a vigorous defense of UNRWA, asserting that it ‘serves an important function and is a force for stability in the region.’”

Gazans continued to march and resist.  Punishment affirmed their need to be seen, and highlighted their missing human rights including their urgent need for protection.

Now the push is on to make them disappear – as Pierre Krahenbuhl, Commissioner General of UNRWA has said, to wish them away.

On July 30, Ma’an news reported that Republican Congressman from Colorado, Doug Lamborn initiated the UNRWA Reform and Refugee Support Act in the US Congress, with the aim of recognizing only 40,000 Palestinian refugees.  “A congressional aide familiar with the legislation said its intent isn’t to gut UNRWA funding, but redirect assistance to descendants through USAID.”

Or not – apparently not.  At least, not through USAID.  Trump has just cut $200 million of USAID’s economic project commitments to the West Bank and Gaza Strip.  As of this writing, USAID’s Gaza project is expected to cease operations by the end of August, with the loss of 100 jobs.  And Trump is expected to end all contributions to UNRWA because it “hopes to pressure Palestinians to return to the bargaining table.”

According to multiple reports, the Trump administration will tie the strings of this campaign together in a report to be released in early September.  The US will recognize no more than half a million refugees, will reject any right of return, and ominously will ask Israel to ‘reconsider’ UNRWA’s mandate to operate in the West Bank.

Trump will cap refugees – Le monde, c’est moi?   As with Jerusalem, in his campaign against Palestinian rights Trump is snatching at something that is not his.  He may have the White House, but neither he, nor his son-in-law nor his personal attorney bestow the rights of humans.   He cannot revoke them.

However, he can precipitously wreck the infrastructure of refugee assistance.  What will happen to the people who need food, who are losing jobs, whose children’s school must operate month by month, whose hospitals have no electricity?

Gazans stubbornly continue to protest at that illegitimate, deadly fence.

The realization of Palestinian rights may be a marathon, but right now, it is also a sprint.  The race is on, to be made to vanish or to be seen and heard.

Marilyn Garson worked with communities affected by war, including Afghanistan and Pakistan (2005 – 2010) and the Gaza Strip (2011 – 2015). She is a co-founder of the Gaza Gateway, a social enterprise creating employment in Gaza. She writes from New Zealand, and blogs at Contrapuntal: Transforming Gaza. You can follow her on Twitter @skinonbothsides.