We Are Not the Resistance 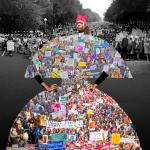 The resistance has once again sprung to action, this time around Brett Kavanaugh’s nomination to the Supreme Court. Even before we learned of the allegation that he sexually assaulted a teenage girl during high school, progressive and liberal forces mobilized to resist his elevation to the highest court in the land, asking people to call their members of Congress, to register their opposition.

Since the beginning of the Trump administration, it seems there has been a new crisis roiling our nation nearly every day — a new jaw-dropping allegation of corruption, a new wave of repression at the border, another nod to white nationalism or blatant misogyny, another attack on basic civil rights, freedom of the press or truth itself. Invariably, these disturbing events are punctuated by Trump’s predictable yet repugnant Twitter rants.

Often the battle lines are clearly drawn and blatantly partisan, as is the case with Kavanaugh’s nomination. Other times it’s less clear where “the resistance” begins and ends. What began as a viral hashtag immediately after Trump’s election has evolved into something that’s increasingly difficult to define. The defiant, boisterous marches that eclipsed Trump’s inauguration helped to inspire a wave of courageous activism, such as the spontaneous protests at airports in the wake of the Muslim ban and the demonstrations against proposed cuts to Medicaid led by disability activists. At the same time, we’ve also seen a broader, bipartisan idea of “resistance” take hold, one that seems to include everyone from establishment Democrats like Nancy Pelosi to the civil rights legend John Lewis to democratic socialists like Bernie Sanders and Alexandria Ocasio-Cortez to James Comey, who has spent most of his adult life as a registered Republican.

Unlike the Tea Party, which was born after President Barack Obama’s inauguration and which spawned a proliferation of well-funded, loosely affiliated right-wing groups determined to hijack the Republican Party and push it further to the right, the only common denominator for “the resistance” today is a commitment to resisting Donald Trump — the man, not necessarily his mission.

Even members of Trump’s own inner circle are joining the ranks. A senior official used an anonymous Op-Ed article in this newspaper to declare himself or herself part of “the resistance inside the Trump administration.” The writer was quick to clarify that he or she was not part of the “‘resistance’ of the left.” Quite to the contrary, the tax cuts for the wealthiest Americans, the expansion of the military-industrial complex and, by extension, the slashing of vital social services were not only fine by him or her but a cause for celebration.

One might argue that the big tent of “the resistance” is its greatest strength: A massive united front becomes possible when the barrier to entry is so low. If you’re revolted by Trump’s tweets and feel terrified by his access to the nuclear codes, you too can join the resistance.

There is power in numbers, to be sure, but I’ve begun to wonder whether the downsides to “the resistance” frame outweigh the benefits. At first, I thought the question wasn’t worth entertaining because #Resist is a hashtag, nothing more. To the extent “the resistance” is an organized political force, it’s doing quite well. The rising number of progressive candidates and the promising midterm election map are testament to the power of the resistance, however it’s defined.

But the time may have come to take the downsides more seriously. Resistance is a reactive state of mind. While it can be necessary for survival and to prevent catastrophic harm, it can also tempt us to set our sights too low and to restrict our field of vision to the next election cycle, leading us to forget our ultimate purpose and place in history.

The disorienting nature of Trump’s presidency has already managed to obscure what should be an obvious fact: Viewed from the broad sweep of history, Donald Trump is the resistance. We are not.Those of us who are committed to the radical evolution of American democracy are not merely resisting an unwanted reality. To the contrary, the struggle for human freedom and dignity extends back centuries and is likely to continue for generations to come. In the words of Vincent Harding, one of the great yet lesser-known heroes of the black freedom struggle, the long, continuous yearning and reaching toward freedom flows throughout history “like a river, sometimes powerful, tumultuous, and roiling with life; at other times meandering and turgid, covered with the ice and snow of seemingly endless winters, all too often streaked and running with blood.”

Harding was speaking about black movements for liberation in America, but the metaphor applies equally well to the global struggle for human dignity and freedom.

The Guatemalan mother desperately fleeing poverty and violence in her home country stands at the border, young child in her arms, yearning for freedom no less than the American mother hundreds of miles away who puts her hands to the plexiglass in a prison visiting room, desperate to hug her child who sits quietly on the other side. The movements that have arisen to honor the dignity of both women — movements to end mass incarceration and mass deportation — are separate streams feeding the same river.

Donald Trump’s election represents a surge of resistance to this rapidly swelling river, an effort to build not just a wall but a dam. A new nation is struggling to be born, a multiracial, multiethnic, multifaith, egalitarian democracy in which every life and every voice truly matters. In recent years, we’ve seen glimpses of this new nation at Standing Rock, in the streets of Ferguson, in the eyes of the Dreamers, in the voices of teenagers from Parkland and Chicago, as well as at L.G.B.T. pride celebrations, the Women’s March and the camps of Occupy Wall Street. Confederate statues are coming down as new memorials and statutes are going up in Montgomery, Ala., and beyond, honoring victims of lynching as well as the courageous souls who fought for the abolition of slavery and the end of Jim Crow.

For many, the election of Barack Obama to the presidency symbolized the imminent birth of this new America, and many whites feared their privileged status, identity and way of life would die in the transition. The reaction was swift and fierce. It shouldn’t have been surprising.

As the historian Carol Anderson documented in “White Rage,” every single advance toward racial justice in this country has been met with virulent, often violent, resistance. But the 2016 election was not about only race or gender. That perfect storm had been brewing for a long time, drawing strength from many political and economic forces and gathering speed as the pace of change accelerated.

If we pause long enough and consider where we stand in relationship to the centuries-long quest to create a truly equitable democracy, we may be able to see that the revolutionary river that brought us this far just might be the only thing that could possibly carry us to a place where we all belong.

Every leap forward for American democracy — from slavery’s abolition to women’s suffrage to minimum-wage laws to the Civil Rights Acts to gay marriage — has been traceable to the revolutionary river, not the resistance. In fact, the whole of American history can be described as a struggle between those who truly embraced the revolutionary idea of freedom, equality and justice for all and those who resisted.

One might wonder whether it matters, in the end, whether we consider ourselves members of the resistance or part of the revolutionary river. Can’t we be both?

The answer, I think, is yes and no. Yes, of course, we can and must resist the horrors of the current administration — thousands of lives depend on us doing what we can to mitigate the harm to our fellow humans and the planet we share. But the mind-set of “the resistance” is slippery and dangerous. There’s a reason marchers in the black freedom struggle sang “We Shall Overcome” rather than chanting “We Shall Resist.” Their goal was to overcome a racial caste system — to end it — and to create a new nation, a Beloved Community. Similarly, those who opposed slavery didn’t view themselves as resisters; they were abolitionists.

Today, many of us in the movements to end mass deportation and mass incarceration do not want to simply resist those systems. We aim to end them and reimagine the meaning of justice in America. By the same token, many of those who are battling climate change and building movements for economic justice understand that merely tinkering with our political and economic systems will not end poverty or avert climate disaster, nor will mere resistance to the status quo. As the saying goes, “What you resist persists.” Another world is possible, but we can’t achieve it through resistance alone.

Michelle Alexander became a New York Times columnist in 2018. This is here debut column. She is a civil rights lawyer and advocate, legal scholar and author of “The New Jim Crow: Mass Incarceration in the Age of Colorblindness.”

A version of this article appears in print on Sept. 23, 2018, on Page SR1 of the New York edition with the headline: We Are Not the Resistance. Order Reprints | Today’s Paper | Subscribe