Murphy Brown Is Back and Ready to Take On Donald Trump 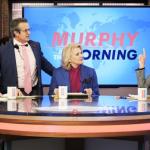 Television is awash in reboots, remakes, and revivals right now. This fall alone brings us a new Magnum, P.I., another Charmed, a slightly retuned Last Man Standing, and The Conners, the reinvention of Roseanne, which just got revived less than a year ago. But there’s something about bringing back Murphy Brown, which makes its much-heralded return to CBS on Thursday night, that feels right, even if it does add one more resurrected sitcom to the heap.

When Murphy Brown first hit its pop-cultural and ratings stride in the late 1980s and early 1990s, the White House was occupied by a conservative Republican president and vice-president, one of whom was known for misspelling things; signs of a rising wave of feminism in Congress were beginning to reveal themselves; and the nation became consumed by the debate over a Supreme Court nominee accused of harassment by a woman who publicly testified before Congress. The new Murphy Brown debuts in a landscape that contains some parallels. The first episode will actually air on Thursday night, the same day that Dr. Christine Blasey Ford is slated to testify before Congress regarding allegations that Supreme Court nominee Brett Kavanaugh assaulted her during high school. If these factors don’t add up to a win in Circle of Life Bingo, I’m honestly not sure what would.

It’s obvious from the get-go of Murphy 2.0 that series creator Diane English and her fellow writers welcome these kinds of connections. The initial episodes of Murphy Brown not only announce that Murphy is back by putting her present in a historical context — the first time we see Candice Bergen as the Murphy Brown of now, she’s wearing a sweatshirt emblazoned with the phrase “Original Nasty Woman” — they immediately establish the comedy’s intention to pit Brown’s brand of outspoken feminism against the politicians of today. “Oh, you bring it on!” Brown shouts in the first episode of her new cable news show, Murphy in the Morning, when Donald Trump suddenly starts trolling her on Twitter. Lest that anyone forget that this journalist has famously exchanged barbs with high-ranking administration officials before, she adds, “Hashtag Dan Quayle!”

Unlike the most recent Roseanne, which was a largely political series that frequently tried to bill itself as something other than that, Murphy Browndeclares its intentions to challenge the current Republican Establishment and the way the news media covers it. It is a partisan show and I respect it for not softening its edges in an attempt to appeal to the masses, especially on CBS, the network responsible for NCIS-ing the nation into a near stupor. At the same time, Murphy Brown is so determined to tear into Trump and other aspects of contemporary culture that it sometimes feels as if the series is being gerrymandered to allow for that, as opposed to organically telling stories that touch on current events.

On the positive side, the natural chemistry between the core cast members is still alive. Just about everybody’s back: Bergen as Murphy; Joe Regalbuto as investigative reporter and Brown’s best friend, Frank Fontana; Faith Ford as fellow journalist Corky Sherwood, who’s gotten less vapid with the passage of time; and Grant Shaud as Miles, the television producer who’s somehow managed to grow even more neurotic. (Anchor Jim Dial, played by Charles Kimbrough, isn’t a regular, but he will make at least one appearance this season.)

That quartet, originally thrown together by their work on the network news program FYI, reconnect to share seats at the glass table on Brown’s new morning cable program. The catch? Murphy in the Morning is slated to air in the same time slot as the new show that’s just been given to Murphy’s now grown son, Avery Brown (Jake McDorman, who starred in Limitless), a progressive-minded guy who’s been granted a platform on the Wolf Network. (That’s supposed to be a riff on Fox News, in case you couldn’t tell.) It’s an amusing conceit that’s also a little hard to believe: There’s no way that Fox News or even a Fox news knockoff would hand one of the most valuable sections of its schedule to a guy who walks around D.C. wearing a Pod Save America T-shirt. But that setup allows Murphy Brown to create some conflict between mother and son, a dynamic heightened by the warm yet competitive vibes generated between Bergen and McDorman. The two complement each other quite nicely.

That said, there’s still a lot that doesn’t quite work — or at least not yet — in this new Murphy-verse. The first episode is definitely the bumpiest of the three provided to critics, mainly because it’s fixated on setting up the circumstances that bring the FYI team back into each other’s orbit, and also on introducing a couple of additional new characters. (Tyne Daly joins the cast as Phyllis, now the owner and operator of Phil’s, Murphy’s hangout of choice, along with Nik Dodani of Atypical, who plays the social-media editor for Murphy in the Morning.) While the actors mesh well, the pacing is sometimes off, and the jokes are a little too hell-bent on staying topical. In general, the comedic targets in the new Murphy Brown can be a bit obvious side: Murphy is a Luddite when it comes to social media, Miles is so freaked out by the chaos in contemporary America that he holes up in an apartment inside the Watergate, Frank gets triggered by the word “Nazi,” etc. etc.

It’s obvious that English & Co. are champing at the bit to give Murphy the opportunity to lay into Trump and other members of his administration, and they orchestrate the first few episodes with that in mind, sometimes at the expense of logic. In the second episode, “I (Don’t) Heart Huckabee,” Murphy, having been banned from the White House, fakes her way into the press room so she can ask Sarah Huckabee Sanders — who makes a cameo appearance via the magic of interspersed, real-life news footage — an extended monologue of a question. It’s a risk that someone as smart and ethical as Murphy probably wouldn’t take, but Murphy Brown is willing to do so because it gives Candice Bergen, still sharp as ever in her career-defining role, the chance to stand up and say to the Trump spokeswoman, “Why do you lie?”

Things go more smoothly in episode three, the best of the initial batch, in which Murphy wrestles with whether or not to interview Ed Shannon, an obvious stand-in for Steve Bannon played by David Costabile of Billions and Breaking Bad fame. It helps that the situation in this chapter of the comedy is more believable — it’s easy to imagine Murphy’s bosses wanting her to interview Shannon for ratings purposes — and that Murphy’s eventual face-to-face with Shannon is less melodramatic than her confrontation of Sanders. There’s also a valuable conversation at the heart of this episode about the responsibility journalists should carry in this bizarre political environment. As Jim, who pops up to offer some advice, sagely puts it: “You don’t have to give equal time to someone who claims Tom Hanks is running a shadow government.” It’s clear that Murphy Brown has the potential to become a more astute, well-oiled machine as the new season progresses and the cast and crew establishes firmer footing.

“Vintage Murphy Brown — that’s what I wanted to see on TV,” Miles says to Murphy after observing her conversation with Shannon. That’s what I expect longtime fans of Murphy Brown will want to see, too, and they’ll probably be pleased on that front. Murphy’s attitude and the sensibility of the series haven’t changed too much, even though the times most certainly have. The appearance of a special guest star — whose scene was purposely left out of the first episode shown to critics to maintain the surprise — may also turn the premiere into something of a talker.

Plus, Bergen looks like she’s having a ball. In the kicker that ends the first episode — the one where Trump refers to Brown as “Old Murphy” during their live-televised Twitter war, which results in strong ratings out of the gate for Murphy in the Morning — Murphy says to herself with a sense of deep satisfaction, “Old Murphy, my ass.” She understands a truth that so much of the current TV landscape is reflecting: Everything old apparently has the capacity to be at least somewhat new again.