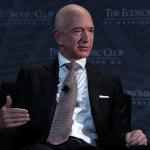 The internet never forgets, and after Amazon’s announcement today that it would raise its workers’ starting wages across the board to $15 — affecting over 250,000 employees plus 100,000 seasonal workers — people were also happy to note that Smith had been proven extremely wrong.

The raise comes after Sanders has waged a campaign of publicly shaming Bezos and Amazon. Bezos is the world’s richest man, worth $165 billion. Bezos might become a trillionaire in our lifetimes. The city of Flint still doesn’t have clean drinking water and Jeff Bezos might not be bothered to pick up a billion dollars if he found it lying in the street.

So Sanders has called him out repeatedly, from the Stop BEZOS Act to his recent “CEOs vs. Workers” town hall. The shaming worked, as Bezos himself basically acknowledged when he stated on the occasion of the announcement, “We listened to our critics.” Amazon still isn’t union — the thing Bezos likely dreads most — but he caved on a major wage demand. He was forced to give up his money to his workers.

Sanders has not waged this campaign alone, of course. Workers have agitated and organized around this issue for years. Without the Fight for $15, we wouldn’t even be talking about a $15 minimum wage as a realistic demand, much less winning it in cities and states and at corporations around the country; without the agitation of warehouse workers employed by or (often improperly) subcontracted by companies like Amazon and Walmart, Bernie would not be talking about these issues. As Jeremy Corbyn tweeted earlier today, “Amazon didn’t gift this, workers organised for it.”

But the news merits reflecting on Smith’s point about the utility of figures like Bernie Sanders “grandstanding and pointing fingers” at the ultrarich — and how that grandstanding and finger-pointing, when carried out in relationship with the working-class movement, can be successfully used by socialists to win real victories even when we are just a small minority with little formal power.

Smith proposed other options for Amazon critics like Sanders to help the company’s workers, some of which are good (raising the minimum wage), some of which aren’t (boosting the Earned Income Tax Credit). But that approach isn’t what got the goods here.

Think about the steps that brought us to this point. As part of his fight against Amazon, Sanders introduced a bill called the “Stop BEZOS Act.” That is, a sitting US senator introduced a bill that targeted the world’s richest man in its very name.

Sanders said, here is a very rich man. This man’s name is Jeff Bezos. Bezos is going about his business, doing his rich man thing, taking untold bajillions that he never toiled to earn. Sanders introduced legislation whose title communicated, “we need to stop Jeff Bezos from doing this.”

Smith seems queasy about class-struggle rhetoric. I understand the sentiment. I’m from the Midwest — I really hate conflict. I’d much prefer that we could convince a billionaire like Bezos through reasonable conversation that his hoarded Scrooge McDuck-sized piles of gold are hurting lots of people: “Don’t you think you should probably just hand that money right on over to us?” But rich people like their money and don’t want to give it to us. We can’t just ask for it nicely.

What mattered in Sanders’s proposed legislation was not so much its content, which you could quibble with. The bill targeted companies like Amazon for paying workers so little that they qualified for public benefits, rightfully arguing against the government subsidizing their low wages but also perhaps further stigmatizing benefits users. But what mattered was the directness with which the bill and the rest of Sanders’s near-daily criticism targeted Bezos.

Unfortunately, we won’t be able to name and shame our way to socialism. We need to build a working-class movement who can not only identify their bosses and the other filthy rich people that run our society and scream out “you suck” at them from the mountaintops but shut off those bosses’ profits by taking action like striking. We need a mass movement against Brett Kavanaugh and climate change and mass incarceration and all the other evils we’re afflicted by. There’s no substitute for it.

But that’s another thing that’s so important to note about Sanders. He didn’t just use his bully pulpit to wage one-man class struggle against Bezos — a lone, brave socialist against a lone greedy billionaire. Sanders has an activist orientation to his position in the Senate and to the workers’ movement that is chomping at the bit to raise hell at Amazon. Without the looming threat of workers disrupting business as usual at Amazon, Bernie’s fulminating about Bezos wouldn’t have much teeth to it. But because he has that connection, and because his rhetoric is so direct, Sanders is able to punch well above his weight when going after Bezos.

Sanders is the only socialist currently in Congress. He won’t find many cosponsors for a “Socialism in Our Time Act” in the near future. But this hasn’t stopped him not only from convincing Bezos to pay $15 but from helping affect massive society-wide shifts in public perceptions of issues like Medicare for All and free college for all.

Who would have thought three years ago that we would have not just a majority of Americans, but a majority of Republicans telling pollsters they back Medicare for All, with support for free college not far behind? These two issues have gone from legislative pipe dreams to what should be litmus tests for Democrats. If massive majorities of Democratic voters back Medicare for All and free college for all, how could any elected Democrat justify not campaigning hard on these issues?

Again, Sanders hasn’t waged these fights alone. On health care for all, for example, health workers’ unions and activist groups like National Nurses United and Physicians for a National Health Program have been fighting for a long time. But he did take this movement’s demands and talk about them endlessly and directly from his massive national platform as senator and presidential candidate.

He argued that we don’t have Medicare for All or higher wages for Amazon workers because there are rich people who benefit from us not having them. He argued this on a national platform to millions of people. This combination of activist demands trumpeted from a national platform allowed both groups to become greater than the sum of their parts. And to play his role properly here, he pointed the finger directly at the world’s foremost plunderer.

“Democratic socialists,” Smith writes at the end of his column, “have focused a lot on optics and on high-profile denunciations of the rich.” He’s correct, we have. Today’s announcement from Amazon shows precisely why denouncements of the rich — preferably by name, on a very large national public platform by a public figure, and in concert with a working-class movement — are a very good idea.

Micah Uetricht is the managing editor of Jacobin. He is the author of Strike for America: Chicago Teachers Against Austerity.

Jacobin is a leading voice of the American left, offering socialist perspectives on politics, economics, and culture. Subscribe today.