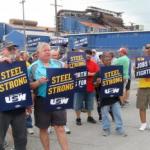 Last week ended with no resolution for contract negotiations between the United Steelworkers and two giant steel-making corporations, U.S. Steel and Arcelor-Mittal, leaving workers in Granite City wondering if they will have to go on strike.

Leaders of Local 1899, the largest Granite City unit, issued a report saying the very life of the union itself is at stake in the negotiations because of proposals U.S. Steel has made.

The company is asking for the rights:

• To sell the plant without transferring the union to new owners.

• To take an active role opposing union organizing campaigns instead of remaining neutral.

“The company is proposing language that will sever the opportunity for our union to remain viable,” the 1899 report said.

“The company wants our union to go away if and when they sell off Granite City Works as an asset to another company, requiring the new venture to not recognize the union, therefore severing the relevance of the union and the membership. This would also sever the terms of the contract if sold to another venture.”

‘WE WILL NOT BE BULLIED’

In addition, the Local 1899 leaders said, the company insists on separating new employees, current active employees and retirees within the contract – something the union will not abide.

“We as a collective bargaining unit and proud members of solidarity will not be pushed into a position to have the active members concede from their years of hard work while throwing retirees under the bus, without dignity for the remainder of their lives. As for new hires, we cannot begin the stage of allowing workers to be tiered. This is not worthy of consideration.”

Negotiators are insisting that the company provide a fair share of its newfound profits with workers, noting that current proposals to replace the contract that ended Sept. 1 still are sketchy and hard to predict.

“We are not going to concede by trusting a company that continues to not share the fruits of labor based on the work of membership,” they said.

“As the company continues the push of very vague and ambiguous language, it places the union in a position of interpretation in important areas where we collectively and jointly need to share a definitive role in our contract to continue incentivizing the membership to work toward keeping the company competitive and viable.

“In order for us to combat the fake news you will undoubtedly read or hear about, we feel best that you hear from us,” they added. “We are standing strong. We are the membership. We have a voice. We will not be bullied.”

GERARD: CALL IT ‘HIDE THE PEA’

Boston Public Radio interviewed UMW President Leo Gerard last week on whether he thinks there will be a strike.

“That depends on the progress or lack of progress we make at negotiations,” he replied. “Our members are frustrated and angry at most of those two major companies at all facilities, and our union has played a very, very, very key role for the last 20 years of struggling every day to help the steel industry survive. We went through a period in 2003 roughly where there were 40 bankruptcies.”

Gerard cited the three years without wage increases or benefit improvements. “Now they’re going to make $2 billion roughly at U.S. Steel, and substantially the same kind of amount at ArcelorMittal, and they come asking for concessions,” he said. “They play hide the pea – they give us a wage increase but then tell us they’re going to take away our incentive programs.

“They want a six-year agreement when we don’t know what the industry will be doing six months or six years from now. It’s kind of off in the distance, and we’re not going to settle for a six-year deal.”

Gerard reminded listeners that the tariffs are not the main reason the industry is doing better.

“The industry started to turn around before the Trump tariffs,” he said. “In fact, the industry was starting to turn around in the last year or so as a result of the work that we had done on productivity, the work that we had done on bad trade with cases we’ve had in a number of countries that were cheaters, and that’s started to have an impact. There’s no doubt that the actions by President Trump have added some to that, but they were on their way to making money before that.”

The companies, he added, seem to think workers don’t realize the industry is also getting a giant tax break.

“And while they’re doing that, they want to shift the tax burden for health care onto our members,” he added. “It’s ‘hide the pea’ and they think we can’t figure it out. Well, we have.”

WAGE PLAN WORTH ABOUT 1.7 PERCENT

On one key issue, U.S. Steel is asking that workers pay $145 in premiums for health care and dental coverage. As bad as it sounds, that’s an improvement over its earlier demand for $237 a month.

The Northwest Times newspaper from steel town Gary, IN, also reported that U.S. Steel increased its salary offer to four percent next year and three percent a year for the next five, plus a couple of $3,000 bonuses. The union says that doesn’t make up for the sacrifices workers have made.

“When you consider that we went the last three years without a wage increase, and they are now proposing an additional six years, and then factor in their proposed premiums payment, the wage package is only worth about 1.7 percent increase per year over that time,” the union said in an update to members.

In early September, before members provided strike authorization, Local 1899 noted that U.S. Steel expects to make about $2 billion in profits this year, that top officers were more than $50 million in total compensation while Granite City Works was shut down between 2015 and 2017, and that the union had agreed to a three-year pay freeze while, from 2012-15, corporate officers substantially increased their own bonuses and salaries.

“The company has clearly showcased that it can afford to accommodate the proposals from the union that are fair in terms of catching up to industry standards and inflation rates,” the local said, adding, “Most importantly, we in Granite City and Local 1899 are taking this personally. The membership has endured far too many concessions in recent years. We’ve endured a long-term layoff, only to come back into the plant, work tirelessly to restart our plant, and remain efficient, safe and hitting goals ahead of timelines. Local 1899, the membership has sacrificed enough!”

About 800 workers who waited out the shutdown have returned to work, exhausting the callback list, and the plant has been hiring new workers to make up for the rest of its needs.

WHEN STEEL TARIFFS CHANGED AN ELECTION

Adam Dean, a political science professor at George Washington University who writes about labor unions and trade, took up the question of why steelworkers would authorize a strike when the government is finally doing what they wanted – using tariffs to support the industry.

“The answer is that profits from high steel tariffs aren’t being shared with steelworkers,” Dean wrote in a Washington Post analysis. “The strike threat is the union’s effort to capture a share of those profits for workers.”

Dean noted that the “small wage increase” now being proposed would be wiped out by “deep cuts to workers’ health care benefits.”

Dean found an intriguing parallel in American history, starting in 1890 when a Republican Congress passed high tariffs that boosted steel prices and profits. In 1892 contract talks, the Amalgamated Association of Iron and Steel Workers (precursor to the UMW) argued, “With the metal tariff as it is … there is no reason why the labor of the mills should not have part of the plum of profits that the ownership has been enjoying.”

Sound familiar? Well, in that case, the company locked out workers at the Homestead Steel plant in Pennsylvania, leading to a conflict in which four workers were killed and the National Guard occupied the town. That became a major issue later that year as workers questioned whether GOP tariffs were of any real help to American workers.

Dean wrote: “While the steelworkers had loyally voted for Republicans for decades, their changed views on tariffs led many of them to throw their support to the Democratic Party. The industrial states of Wisconsin, Indiana, Illinois and New York all voted for Grover Cleveland, the victorious Democratic candidate for president.”