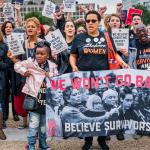 For decades, the right has undermined Black protest and resistance movements as “violent,” “dangerous,” and “un-American” and has responded with militarized force. Under this administration, Trump and his allies are replicating and amplifying this strategy, using misogyny and antisemitism to further erode the basic foundations of political participation.

In response to weeks of women and trans protests demanding that Judge Kavanaugh, who has been accused of sexual assault, be removed from consideration for the Supreme Court, Donald Trump tweeted out:

The very rude elevator screamers are paid professionals only looking to make Senators look bad. Don’t fall for it! Also, look at all of the professionally made identical signs. Paid for by Soros and others. These are not signs made in the basement from love! #Troublemakers

This was quickly followed by a retweeted antisemitic message from Rudy Giuliani, Trump’s lawyer and a longtime Republican leader, calling Soros the enemy of Christ:

Follow the money. I think Soros is the anti-Christ! He must go! Freeze his assets & I bet the protests stop.

This antisemitic rhetoric from the state echoes among white nationalists. In the days following Trump’s tweet and Brett Kavanaugh’s confirmation to the Supreme Court, fliers (created by the Daily Stormer) appeared on college campuses and in cities in California and New York. The fliers blamed Jews for orchestrating the assault allegations brought against Judge Kavanaugh. They read: “Every time some anti-white, anti-American, anti-freedom event takes place, you look at it, and it’s Jews behind it.” The Northern Virginia Jewish Community Center (the community center I grew up in) was vandalized with dozens of swastikas. 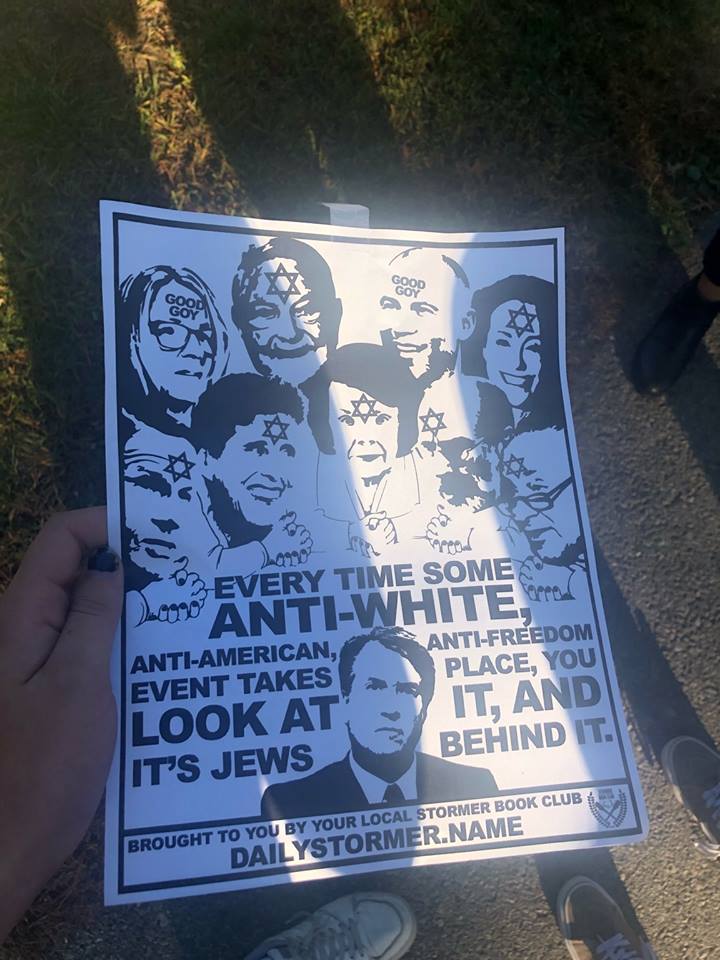 Trump’s white nationalist audience knows what he means when he points the finger at Soros—he’s invoking a time-tested antisemitic strategy for undermining social movements. According to Jews for Racial & Economic Justice (JFREJ) Board Member Dania Rajendra:

Antisemitism and the idea of “outside agitators” is the right’s most effective tool for delegitimizing both the message and messengers of social justice. If protest can be blamed on those outside of the state, then both the message and the messenger are untrustworthy. Delegitimizing both is necessary to eventually repress or expel said “troublemakers” by the forces of “law and order.” And in fact, we saw the president say exactly that to a conference of police the same week as his post-Kavanaugh-protest Soros tweet.

We know that we need a strong, vibrant, awake electorate holding elected officials accountable. Undermining the credibility of protest is an extremely effective tool of protecting those in power.

Right-wing regimes have long broken down the fabric of political protest by using the antisemitic notion of rich Jewish financiers as the “puppet masters” of social unrest. During the Russian Revolution, the Tsar’s secret police published the Protocols of the Elders of Zion, a fictional account of a meeting of rich Jews plotting to break down the society of their “host countries” and rule the world through the promotion of social upheaval. For a period, the Protocols did its job to undermine and destabilize the revolution against the Tsar. Because of its success, it’s been translated and promoted by right-wing ideologues around the world ever since.

The Protocols gave us dog whistle terms like “globalist,” a slur associated with Jews that paint them as untrustworthy, ready to betray the nations of their residence in service of an unseen authority. The general idea, from JFREJ’s resource Understanding Antisemitism: An Offering to our Movement, is that “Jews are a powerful, corrupting influence on otherwise good, pure people—insidious troublemakers with a nefarious agenda at odds with that of the good, ‘true’ citizens of a nation.”

During McCarthyism, these well known stereotypes about Jews were used to tar communists and leftist movement activists (Jewish and non-Jewish) as untrustworthy, two-faced “troublemakers” with foreign loyalties detrimental to the United States. The over-representation of Jews and non-Jewish people of color (always seen as suspect by the white owning class) in leftist movement circles made these claims plausible. Through institutional state repression and violence—blacklisting, closures of organizations, and ultimately the public execution of the Rosenbergs—the Red Scare successfully decimated the social fabric of leftist movements.

It is deeply troubling to see these same tropes, indeed some of the very same language, being used against today’s social movements by the president and leaders of the Republican party. Trump and other Republicans have regularly claimed that George Soros (the central target of this anti-Semitic messaging) is entirely behind the Movement for Black Lives. Here racism and antisemitism intersect: rather than admit that a strong, powerful Black liberation movement is growing throughout the US, some white people would believe that it is one or a few rich Jews propping up Black people to cause unrest in the streets and undermine white Christian society.

It's not just antisemitism on its own, but antisemitism deployed against the left that gives the lie about Soros its cultural power. Our side can point out that right-wing efforts are funded by the Koch, Walton and Mercer families all day long, but that fact and its broadcast never delegitimizes their endeavors. That's because the Soros lie—the invocation of the idea of the scary, untrustworthy Jew—is built on top of a bunch of other assumptions: that "real" Americans are Christian and white, and hew to patriarchal gender norms and racial segregation.

Luckily, we know how to fight back. We can recognize the ways in which racism, antisemitism, and misogyny are deployed to keep our movements weak and divided and we can refuse to fall for conspiracy theories. We can join together in the raw, tough, honest work of building multi-racial, multi-gender, multi-class, multi-faith movements. We can center the leadership of those most impacted. We can collectively disinvest from whiteness and practice multi-racial democracy in everything we do.

In the face of the destructive attacks of the extreme right wing, we have an opportunity to respond with a solidarity that buttresses and expands democracy—a rebuttal to an oppressive past and a promise for a liberated future.

[Dove Kent is an organizer, educator, and movement builder based in Durham, North Carolina. She is the former Executive Director of Jews for Racial & Economic Justice.]

The use of an anti-Semitic trope to condemn protesters for exercising their First Amendment rights signals a turning point in the authoritarian trajectory of our politics.

The confirmation process for President Donald J. Trump’s Supreme Court nominee, Judge Brett Kavanaugh, continues to be a significant test of the U.S. form of government, and a display of high drama.

Washington, D.C., was only on its third cup of coffee when the presidential tweethit: “The very rude elevator screamers are paid professionals only looking to make Senators look bad,” wrote Trump. “Don’t fall for it! Also, look at all of the professionally made identical signs. Paid for by Soros and others. These are not signs made in the basement from love! #Troublemakers.”

He was speaking, of course, of the sexual assault survivors—mostly women—who have been following the example set by Ana Maria Archila and Maria Gallagher when they famously confronted Republican Senator Jeff Flake by holding his elevator door open and imploring him to consider the experiences of those who have been targets of sexual assault when deciding whether to vote for moving the nomination to the Senate floor.

Before long, speaking from the Senate floor, Majority Leader Mitch McConnell—who had recently promised the religious right that he and his caucus planned to “plow right through” the confirmation—complained of the “harm” he said was done to Kavanaugh and his family because of allegations of sexual assault made against him by Christine Blasey Ford, a psychology professor from California. Then McConnell cast the thousands of protesters who have come to the U.S. Capitol buildings in opposition to the nomination as “the mob.”

In both instances, these national leaders branded people exercising their First Amendment rights as dangerous.

In both instances, these national leaders branded people exercising their First Amendment rights as dangerous.McConnell complained of security threats to senators. And Trump trotted out the right’s favorite code word for its ideology of anti-Semitism. That word is “Soros.”

In both the fever swamps of the American right, and the forests of Europe’s right-wing nationalist movements, the hedge fund billionaire George Soros—a Jewish Holocaust survivor born in Hungary—has become a favorite bogeyman because of his support of liberal and civil-society groups. In Europe, he is cast as a destroyer of Europe’s Christian values. (His Open Society Foundation was pushed out of Hungary, which also recently passed anti-immigration legislation dubbed the “Stop Soros” law.) He’s also a favorite target of the U.S. right, where invocation of his name carries the same sort of anti-Semitic code. Here, he’s reviled for donating to progressive and liberal groups, and has consequently become fodder for the conspiracy theorists of the right.

Characterizations of Soros by right-wing figures follow the outline of old anti-Semitic tropes such as the fabricated “Protocols of the Elders of Zion,” and conspiracies supposedly involving the Rothschild family.

This is the strategy of authoritarians. Create fear that chaos created by backlash to the authoritarian’s exercise of raw power is really taking place at the direction of one very powerful enemy. Discourage people from public protest by painting the opposition as “evil,” as Trump did in the Mississippi rally he led this week, where he mocked Ford for her inability to remember every single little detail of the 1982 evening on which she says she was assaulted by Kavanaugh.

“These are really evil people,” Trump said of Ford and the Democrats who insisted on her right to testify before the Senate Judiciary Committee, whose job it is to vet nominees to the federal bench. Note that among the right-wing evangelicals who comprise much of Trump’s base, “evil” is regarded as an existential spiritual threat, the stuff of Satan.

As I write this, the outcome of the final vote on Kavanaugh’s nomination to sit on the highest court in the land is not certain. But the clampdown is coming—a clampdown on dissent, a clampdown on access to the levers of congressional process by the president’s opponents.

As I write this, the outcome of the final vote on Kavanaugh’s nomination to sit on the highest court in the land is not certain. But the clampdown is coming—a clampdown on dissent, a clampdown on access to the levers of congressional process by the president’s opponents. As McConnell promised, he really has “plow[ed] right through” this nomination process, complete with a final FBI report on the sexual assault allegations against Kavanaugh that, through circumscription of inquiry imposed by the White House, amounted to a whitewash.

The exercise of authoritarian power is not anything that Trump, McConnell, and their allies even attempt to conceal at this point. It’s happening in front of your face. Pay attention. Take note of the signs. But don’t let it keep you from the streets, or from the voting booth.

The republic as we have known it could cease to exist if we allow it. And that time is growing closer. They’re playing for all the marbles. They mustn’t be allowed to win.

[Adele M. Stan is a columnist for The American Prospect. She is research director of People for the American Way, and a winner of the Hillman Prize for Opinion & Analysis Journalism.]