Dads in Space: Review of 'First Man' and 'High Life' 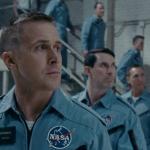 Damien Chazelle’s First Man takes us back to a time when Americans were so convinced we would live forever that we spent billions of dollars sending three men on a tour of the lifeless rock known as the moon.

Released the same week as a UN climate change report that forecasts world crisis by 2040, the movie made me ill. But the political context is not entirely to blame. Chazelle favors a shaky camera and extreme close-ups of whatever crosses its path—a control panel, a dining room table, Claire Foy’s eyes. This is supposed to put us in the moment, strip away the grand historical dressing, and help us find in this most familiar TV spectacle something intimate and human. It made me feel what the astronauts do in the multi-axis chair: nausea. I left the IMAX theater with a splitting headache and took immediately to bed.

Foy plays the wife, Janet Armstrong. She nearly wrests control, but this is not her story. The title, after all, is First Man. Is it the implied male hero-worship that rankles my ear? The notion that being first and being a man are irrevocably bound? The Adamic association? The implication that men were not men before men were in space? The echo of manifest destiny? What makes First Man different from other movies about the Apollo missions is that it focuses on the emotional state of the hero, Neil Armstrong (Ryan Gosling). In another movie about the moon landing, the moon landing would be the climax; in this one, there is as much climax in Janet forcing Neil, who is attempting to leave for outer space without saying goodbye to the kids, to explain to them that he may well die on the mission.

Who am I kidding? Landing on the moon is still the climax. We know this because the soundtrack, which has up until that point been deafening, momentarily drops out. There are stunning shots of lunar waste and craters. Armstrong bounces across the surface of the moon and when we look back at the Eagle lunar module, an American flag has appeared in the ground. Some have grumbled that because the movie does not show Buzz Aldrin planting the American flag, it is unpatriotic. But the problem with not showing the flag-planting is not that it is unpatriotic, it is that it obscures the nationalist impulses behind the space race. Chazelle has explained that Aldrin planting the flag would take the focus away from Armstrong. But the effect is to make America’s claim on the moon seem so natural and preordained that the flag appear by cosmic right.

From beginning to end, First Man is a paean to American greatness. Chazelle does include a quick montage of protesters demanding that the money on NASA be spent to help the poor and hungry at home, set to Gil Scott-Heron’s “Whitey on the Moon.” (I will not be the only person to point out that that Whitey on the Moon would have been a good title for the movie.) But the protesters don’t matter to the film because First Man’s idea of greatness does not inhere in the space race or even the pursuit of knowledge or science, but rather in its hero’s stoicism.

Armstrong is great, we are shown, because he is humble and taciturn. He keeps cool under pressure. He does not play to the press, like the chatty Aldrin. (When asked how he felt when he was selected for Apollo 11, all Armstrong can muster is, “I was pleased.”) This is not a new perspective on Armstrong, but the political climate makes such displays of suffering, “real” masculinity more charged than they were thirty-five years ago, when The Right Stuff was in theaters.

We learn that he used to cut loose a little more: he was the musical director of his college fraternity, and wrote all new lyrics to Gilbert and Sullivan tunes. But his two-year-old daughter Karen died of a brain tumor, and he doesn’t ever talk about it. On the moon, Armstrong releases Karen’s name bracelet into the void—a gesture that at once successfully manipulates the audience’s feelings and seems to serve as a bizarre justification for the Apollo program itself. The last shot of the film shows Armstrong in quarantine, touching Janet’s hand through the glass. This is meant to show us that Armstrong is an all-American man apart, separate in his pain and grief, and also in his humble heroism—literally untouchable. Such is the price of being the first man, or maybe just a real one.

Another movie about fathers in space had its American debut this month—Claire Denis’s High Life, which played at the New York Film Festival.

High Life begins with shots of a garden where sprinklers keep the kale and lettuce damp and misted. Then we see empty halls, and a ramshackle crib positioned in front of a computer monitor. The computer says “dada.” The baby cries. Outside, against a backdrop of interstellar nothingness, a handsome astronaut repairs the exterior of a ship while shushing the baby through his headset. He drops his wrench and watches it float away.

The baby is named Willow (Scarlett Lindsey), and her father, Monte (Robert Pattinson), is the last survivor of a crew of death-row inmates who exchanged prison on Earth for prison in space. We learn, in flashback, that they were kept under the syringe of Dr. Dibs (a scenery-chewing Juliette Binoche), a deranged fertility doctor-cum-warden with a cascading black mane who was herself incarcerated for murdering her children and then dedicated herself with fanatical devotion to creating new life on board the ship. Every inch a bad mother, she inseminated the female prisoners with sperm samples she collected from the men. (Monte refers to her, seemingly without humor, as “the shaman of sperm.”) One night, when the crew was sedated, she raped Monte in his sleep, collected his semen with her hands, and inseminated a female prisoner, who, despite the high levels of radiation, bore a child.

Most space movies emphasize the conquest of space. Denis gives us the conquest of people. Agency in High Life is reduced to the point of helpless passivity. New life, a baby, is forced on the prisoners; they don’t willingly procreate (crew members enter a robotic chamber, not unlike a car wash, for sexual release). What’s more, this new life appears to have been hatched out of the incubator, as miraculously as Chazelle’s American flag—there is no scene of Willow’s birth.

Why does Denis bring together space, prison, fatherhood, and reproduction? What are these ideas meant to say to one another? Is reproduction a prison? Is High Life an allegory of prison, or an allegory of in vitro fertilization? It is something else—a visual experience, a set of images and tensions: peace in the garden; Binoche’s rippling back; the rituals of calisthenics; bodies floating, untethered, in space. There are fluids everywhere: blood, semen, graywater, waste, black sludge, drinking water, breast milk, vegetable purée. Denis is not a filmmaker who privileges plot. She specializes in the communication of intense feeling, but the result is usually more powerful, because it is usually grounded in an emotional reality. High Life seems to aspire to be a cosmic Beau Travail—her dreamlike 1999 adaptation of Billy Budd, set among French Foreign Legion soldiers training in the desert—but it is ultimately too capricious. Beautiful young prisoners beat each other up and kill each other for no clear reason. Denis’s eye is as interesting as ever, but the story is not.

Monte is the most self-abnegating of the prisoners: he abstains from the box and refuses to produce sperm for Dibs’s experiments. I like watching Pattinson, and there is something interesting about the kind of fatherhood he represents—a stay-at-home, co-sleeping millennial dad, he’s the opposite of the stoic, remote Armstrong. He’s an involved father, loose and affectionate with the baby. Pattinson has said that he had planned to be more tense and stern in his performance, but, on set with an actual baby, he had no choice but to be loving. (One baby considered for the role cried every time Pattinson picked her up, so she was replaced with the baby of a friend of Pattinson’s.)

All parents chatter mindlessly to their infants about whatever crosses their mind. Monte’s version is to tell Willow that she should never eat her shit or drink her piss, no matter how recycled they’ve been, or how much they no longer resemble themselves. This, he says, is a “taboo.” He repeats it: “Tab-oo. Tab-oo.” Where there is a garden, after all, there are bound to be temptations. At a Q&A after the NYFF screening, Denis explained that the idea for High Life was sparked when an American producer wanted her to make a movie about a femme fatale. She already had an idea for a movie about a father and baby daughter in space. Maybe, she thought, the baby could grow up to be a femme fatale. Denis is known for the tender father-daughter relationship depicted in her 35 Shots of Rum (a retelling of Ozu’s Late Spring), but she more recently took up the theme in Bastards, her 2013 adaptation of Faulkner’s Sanctuary that reaches a horrifying and incestuous conclusion.

High Life’s characters can never go home. Nor can they create a new world. They bring to space violence, desire, coercion, taboo—in a word, civilization. At the end of the film, we see teenage Willow (Jessie Ross) and Monte in bed together, sleeping. He wakes up and tells her to go back to her bed. She doesn’t want to, and he insists. When she leaves his bed, there are drops of blood on the sheets. Is it her period, or did they have sex? In the end, Willow, in full adolescent bloom and golden Renaissance light, persuades Monte that they should fly into a black hole. She insists that they’re going to survive, but for the viewer, it feels more like an escape through death. The choice, Denis seems to say, is between a taboo and a black hole.

[Christine  Smallwood is a writer and critic in New York.]