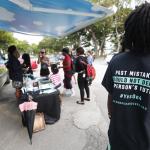 In a "huge and hard fought victory" that writer and activist Shaun King called "one of the most important of our lifetime," Florida on Tuesday overwhelming approved Amendment 4, which restores voting rights for 1.4 million state residents with past felony convictions who were barred from participating in elections even after completing their sentences.

"Not only does this repeal one of the country's worst Jim Crow laws," noted Public Citizen, "it's also the largest expansion in voting rights since the Voting Rights Act," which was enacted in 1965.

With 81 percent reporting on Tuesday evening, the ballot measure surpassed the 60 percent threshold needed, securing support from 64.1 percent of voters. While the measure restores rights for most felons who have fully completed their sentences, it does not extend to those with murder or sex crime convictions.

"For too long, Florida has been an extreme outlier," concluded ACLU of Florida executive director Howard Simon. "Our state's lifetime voting ban was the single most powerful voter suppression tactic in the country, shutting more people out of the voting booth and out of our democracy than any other single law or policy in the country."

Prior to the state constitutional amendment's passage, as Ari Berman reported for Mother Jones, Florida was "one of only four states that prevent ex-felons from voting even after they've paid their debt to society. This felon disenfranchisement law, which dates back to the Jim Crow era, blocks 10 percent of Floridians from voting, including one in five African Americans."

The results came in ahead of a closely watched gubernatorial race between former Republican Congressman Ron DeSantis and Tallahassee Mayor Andrew Gillum.

"The constitutional amendment the voters have now approved is not the end of this saga; it is more like the end of the beginning," declared Simon, vowing to work with whoever is elected governor "to ensure that Amendment 4 is implemented as intended by the Floridians who placed in on the ballot and voted to approve it—without delay and without imposing more burdens on the process to register to vote."

While the move is expected to significantly influence the political future of Florida—as Berman put it on Twitter, "Restoring voting rights to 1.4 million people is game changer for voting rights & criminal justice reform & will transform Florida's political map"—Simon, and others, tied the outcome to attacks on democracy across the United States.

"Today, when democratic values are on the defensive worldwide," he said, "Florida voters made a resoundingly clear statement that the state's shameful lifetime ban on voting is not consistent with the values of democracy."

Our Revolution president Nina Turner said in a statement that "tonight's passage of Amendment 4, commonly referred to as 'Second Chances,' shows that we, as a country, are moving towards a more just, equitable society that lives up to the value of 'one person, one vote.'