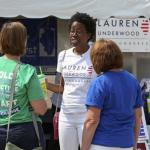 The blue wave had some black riders. Every African American Democrat in the House running for re-election in this year’s midterms won his or her race.  In addition, voters sent nine new black members, all Democrats, to Congress. As a result, the number of black House members will grow to an all-time peak of 55, even if, as appears possible, both black Republicans(Utah’s Mia Love and Texas’ Will Hurt) lose their seats.

What’s unusual about the nine new members is that all of them prevailed in predominantly white and mostly suburban districts. Five of the nine are women.

For most of the 20th century, there were few black members of Congress. In 1950, only two African Americans (William Dawson of Chicago’s South Side and Adam Clayton Powell of Harlem) served in the House. The civil rights movement and the 1965 Voting Rights Act led to a significant upsurge of black office holders. By 1970, the number of blacks in the House had grown to ten and by 1990 it reached 25.

Despite the white racism that President Trump has both fostered and uncovered, it is also clear that a growing number of white Americans will support black candidates. In 1958, when the Gallup poll asked Americans if they would vote for a black person for president, only 38 percent said yes. That number grew to 77 percent in 1978 and 96 percent in 1997. Of course, telling that to a pollster is not the same thing as pulling a voting lever for a black candidate. But evidence indicates that more and more white voters are walking the walk, not just talking the talk.

Each of the nine new black Congressional members focused on local issues, but also stressed their opposition to the toxic Trump and ran on the number one issue for Democrats this year—the Republicans’ threat to repeal the Affordable Care Act.

Lucy McBath’s victory was perhaps the most stunning upset. She defeated Republican incumbent Karen Handel in Georgia’s Sixth District in the Atlanta suburbs that was once represented by Newt Gingrich and where 61 percent of residents are white and only 14 percent are African American. McBath became a reluctant public figure in 2012 when her 17-year old son Jordan was shot dead at a Florida gas station by a white man who complained about loud music. McBath became a gun control activist, quickly becoming national spokesperson for Moms Demand Action. She decided to run for Congress after the mass shooting at the Parkland, Florida high school in February. In April 2017, Jon Osoff, a little-known Democrat and first-time candidate, laid the groundwork by giving Handel a close race in a special election to represent the district. He lost by a 52 percent to 48 percent margin. McBath won her race —by a 50.5 percent to 49.5 percent margin—in part by improving on Osoff’s outreach to African Americans and by drawing on the anti-Trump sentiment among women.

Almost as shocking was Lauren Underwood’s defeat of four-term Republican incumbent Randy Hultgren in a district once represented by Republican former House Speaker Dennis Hastert. A 32-year-old registered nurse, she had served as a senior advisor in the U.S. Department of Health and Human Services during the Obama administration. She has a pre-existing heart condition and decided to run for office for the first time after Hultgren voted to repeal the Affordable Care Act. Two years ago Hultgren won with 59 percent of the vote in what was considered a safe Republican district, in Chicago’s affluent suburbs, where 79 percent of residents are white and only 3 percent are black. In what was obviously racially coded language, Hultgren described Underwood as an “outsider,” even though she grew up Naperville in the heart of the district. But Underwood unseated him by a 52 percent to 48 percent margin.

Antonio Delgado, a  Harvard Law School graduate and Rhodes scholar, had to overcome race-baiting efforts to brand him as a “big-city rapper” to win this seat. New York’s 19th Congressional District, which is 85 percent white and only 4.5 percent black, has long been considered a safe Republican bastion in the state’s upstate Hudson Valley and Catskill region. Two years ago, first-time candidate Republican John Faso defeated well-known progressive activist and scholar Zephyr Teachout with 54 percent of the vote, while Trump beat Clinton by 51 percent to 44 percent. This year, Delgado won 50 percent of the vote to Faso’s 47 percent.

George W. Bush’s new Congressman will be Colin Allred. Texas's 32nd congressional district encompasses Dallas’ northeast suburbs, including Preston Hollow, Bush’s home since he left the White House. Vice President Mike Pence and Donald Trump Jr. traveled to the district to campaign for Republican Representative Pete Sessions, who has served in Congress since 1997 and was chair of the powerful House Rules Committee, but he still lost to Allred, who grew up in Dallas, attended Baylor University, and played linebacker for the NFL’s Tennessee Titans. Allred left his football career to earn a law degree from the University of California at Berkeley. He worked in the Obama White House, at HUD, and in the U.S. Attorney’s office in Maryland, then returned to Dallas to work as voting rights lawyer for Battleground Texas. Whites comprise half of the district’s population and blacks only 13 percent. In 2016, Sessions had no Democratic opponent. This year, Allred defeated Sessions by a 52 percent to 46 percent margin.

Come January, llhan Omar will join Michigan’s Rashida Tlaib as the first Muslim women elected to Congress. She replaces Democrat Keith Ellison, who left Congress to run successfully for Minnesota attorney general. Raised in Somalia, Omar and her family fled the country in 1991 during its civil war and spent four years in a refugee camp in Kenya. In 1995, when she was 15, they moved to the United States, settling in Minneapolis. She learned English in three months, graduated from high school and college, and began a career in Minneapolis as a community nutrition educator, while helping run several candidates’ campaigns for city council and state legislature. While working for  as Director of Policy & Initiatives for Women Organizing Women Network, which advocates for women from East Africa, she was elected to the state legislature in 2016—the first Somali American legislator in the nation—where she pushed for a $15 minimum wage and subsidizing higher education costs for low-income students, among other progressive issues. Comprising part of Minneapolis and its suburbs, the district’s population is 64 percent white and 17 percent black. The 37-year old Omar won this safe Democratic district with 78 percent of the vote.

Jahana Hayes, the first African American elected to Congress from Connecticut, grew up in public housing projects in Waterbury.

Jahana Hayes, the first African American elected to Congress from Connecticut, grew up in public housing projects in Waterbury. In 2016, as a history and government teacher at Kennedy High School in Waterbury, she was named National Teacher of the Year, which drew considerable media attention, including a profile in The Washington Post, an appearance on Ellen DeGeneres’ talk show, and an invitation to address the National Educational Association’s annual meeting. Connecticut’s Fifth Congressional district is comprised primarily of affluent suburbs and small townsin the state’s northwestern corner, with 71 percent white residents and only 6.5 percent black. Its voters typically support Democrats for president and Congress. Considered a long shot to win the party primary against a longtime local Democratic politician, Hayes, 46, won the race with support from the Connecticut Education Association and the Working Families Party. She emphasized her tough upbringing, support for single-payer health care, stricter gun control, unions, and standing up to Education Secretary Betsy DeVos. Hayes beat former Meriden Mayor Manny Santos, a Republican, Marine veteran and strong Trump supporter, for the open seat by a 56 percent to 44 percent margin.

Ayanna Pressley will now be the first black Congresswoman from Massachusetts. In 1994 Pressley left Boston University to take a full-time hotel job to support her mother, then worked for Representative Joe Kennedy and Senator John Kerry. In 2009 she was elected to one of the four at-large seats on the 13-member Boston City Council, the first black women to serve in that body. Running at-large meant that she had to appeal to voters across the city. She topped the ticket when she ran for re-election in 2011 and 2013, and placed second in 2015 and 2017, demonstrating her broad support, with particular strength in Boston’s progressive white neighborhoods and Black and Latino communities. In January of this year shesurprised the political world by launching a primary campaign against three-term incumbent Representative Mike Capuano, a liberal Democrat. She shocked pundits even more when she beat Capuano, running to his left in the overwhelmingly Democratic Seventh Congressional District. With the support of the Boston Globe, the hotel workers and the electrical workers unions, and progressive groups, Pressley defeated Capuano by a whopping 59 percent to 41 percent margin, then ran unopposed in the general election. Pressley’s new district is the most diverse and urban of those carried by these nine new members, with a population that’s 41 percent white, 26 percent black, 21 percent Latino, and 10 percent Asian, encompassing half of Boston and several polyglot suburbs.

Joseph Neguse will be the first Eritrean-American elected to Congress and Colorado’s first black Representative. He replaces Democrat Representative Jared Polis, who ran successfully for governor and will become the nation’s first openly gay state chief executive. The Second Congressional District—which includes Boulder and Fort Collins as well as smaller towns in the north-central part of Colorado—is 83 percent white and only 1 percent black. Neguse's parents immigrated to the United States from Eritrea, met and married while living in California, and moved to Colorado when he was six. In 2006, while a law student at the University of Colorado, he founded New Era Colorado, an organization to get young people involved in politics. He won a seat of the University of Colorado Board of Regents and worked as an aide to an influential state legislator. After losing  a close race for Colorado Secretary of State in 2014 he was appointed executive director of the state’s Department of Regulatory Agencies by Democrat Governor John Hickenlooper. In a safely Democratic district where Obama won 58 percent of the vote in 2012 and Clinton beat Trump by a 56 percent to 35 percent margin, Neguse coasted to victory this year, with 60 percent of the vote, against Republican Peter Yu.

Forty-five year old Steve Horsford won back the Congressional seat he lost in 2014. Nevada’s Fourth Congressional district—47 percent white, 29 percent Latino, and 14 percent black—is a quintessential swing district. Created in 2012, it has flipped from Democrat to Republican to Democrat. It stretches from the north Las Vegas suburbs across the central part of the state. Horsford grew up in Las Vegas and was involved in student politics at the University of Nevada. Horsford worked with Las Vegas’s powerful Culinary Workers union on job training programs, then ran the Culinary Training Academy, cosponsored by the union and the hotel industry.With the union’s support, he was elected to the State Senate in 2005 and in 2009 became thefirst African American to serve as Majority Leader. In 2012 he ran for the newly-created congressional seat, defeating Republican Danny Tarkanian (a perennially unsuccessful candidate and son the legendary UNLV basketball coach Jerry Tarkanian) by a 50 percent to 42 percent margin. Two years later, Horsford lost his seat to Republican Cresent Hardy, who served one term before losing to Democrat Ruben Kihuen, who did not seek re-election this year. In  a rematch, Horsford beat Hardy by 52 percent to 44 percent.