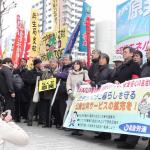 Labour union demands for wage increases were boldly submitted. To underline their steely determination, workers walked off the job in the spring. Trains were halted, leaving millions of commuters stranded and angry. The world watched to see how many days or weeks it would take Japanese business leaders to fold and to agree to wage hikes large enough to satisfy the labour union negotiators.
But that was the character of Japan from the 1950s to '70s - the high-growth era in which this East Asian nation rose from the ashes of a bitter wartime defeat to eventually reach the heady status of the number-two economic power in the world.
Even before that earlier period ended, shunto, the Japanese term for "spring offensive", had become more of a ritual than anything else, and union militancy faded perceptibly as the years went by. Today it is practically unknown.
"In the 1970s, there were almost 6,000 strikes on an average year, but last year there were only 68," Motoaki Nakaoka, general secretary of the National Trade Union Council (Zenrokyo), points out. "This is an era in which even the labour leaders don't know what it is like to prevail in a strike."
Union survival
It is not only Japanese labour activism whose effectiveness is in question, but the very existence of Japanese labour unions themselves. According to a comprehensive survey carried out by the Ministry of Health, Labour, and Welfare, the proportion of Japanese workers who are members of labour unions has fallen to 17.9 percent. At its peak in the early postwar years, that figure was above 55 percent.
Many factors contributed to this steady decline in the power of labour organisation in Japan, and it's a story familiar to many developed nations.
For one thing, Japan's conservative governments became less tolerant of labour activism and large-scale strikes as the years went by. Socialist and communist parties with which labour unions were affiliated either weakened substantially at the polls, or else disappeared altogether.
The Japan Socialist Party serves as a particularly striking example. In the 1990 general elections the party won 136 seats in the House of Representatives. Now called the Social Democratic Party, it gained only two seats in last December's general election and is on the verge of losing its legal qualification as a full-fledged political party.
Both a cause and a symptom of the decline in big labour's power is the increase in the number of irregular workers in the national economy as compared to regular employees - those who still benefit from Japan's famous lifetime employment system. A larger number of Japanese, especially women, work as part-timers, dispatched workers, and contract workers; in other words, people who serve their companies for lower wages on an hourly basis and with fewer legal protections.
Union leaders admit their poor record concerning irregular workers.
"Although the national rate of labour organisation has been steadily declining for many decades, it is from the mid-1990s that the actual number of unionised workers has been falling. This is related to the increase in the proportion of irregular workers in the national economy. Labour unions' efforts to organise irregular workers have been insufficient," said Yoshikazu Odagawa, general secretary of the National Confederation of Trade Unions (Zenroren).
Slow decline
The current structure of three rival labour union federations in Japan came about in late 1989. By far the largest, most influential, and most conservative of the three is the Japanese Trade Union Federation, known as "Rengo".
The leaders of Rengo sit opposite the Japan Business Federation, or "Keidanren", every spring and negotiate the annual wage hikes across the various fields of Japanese industry.
But the contest between big business and big labour is now quite an unequal one. When Rengo presented its demand in late January for an average pay raise of 1 percent for Japanese workers, Keidanren's response was that any wage hike was "out of the question" as it ignored "the real condition" of the economy.
Nobuaki Koga, the president of Rengo, countered, "It is extremely regrettable that the organisation of business managers is offering no vision whatsoever of how we can escape from deflation and to revitalise Japanese society."
The labour unions received an important assist from an unexpected source - Japan's ultraconservative Prime Minister Shinzo Abe.
One of the central planks of "Abenomics", as his economic policy is known, is to boost consumer spending in order to lift the nation out of its long-term deflation. One of the obvious measures that can be taken to encourage Japanese consumers to spend more is to put more money in their pockets.
Meeting with the head of Keidanren and other business federation leaders on February 12, Prime Minister Abe directly encouraged them to support wage hikes for Japanese workers. It was a rare occasion on which the leader of the pro-business Liberal Democratic Party took the side of labour against his usual management allies.
The business leaders left the meeting making grudging comments about the possibility of raising lump sum bonuses for workers instead of their regular salaries.
"To boost domestic demand, companies need to reflect profits in wage hikes or bonuses as much as possible," Yasuchika Hasegawa, chairman of the Japan Association of Corporate Executives, told a press conference last week.
However, some observers say the prime minister's unusual intervention will have little effect.
"In principle, all managers want to raise wages. Right now it is not that they don't want to do it, but that they cannot do it ... I don't believe that companies can respond to Abe's call to raise wages," said Takatane Kiuchi, a former banker and House of Representatives lawmaker.
Kiuchi also predicted that the political influence of labour unions will rebound in the future. Unions remain among the few large-scale non-governmental groups in Japanese society, and this is a major factor that suggests the potential for their rebirth.
"They may look very weak right now, but because unions have become quite realistic and constructive, I think they will gain power again," said Kiuchi.
Source URL: https://portside.org/2013-02-25/japanese-labour-unions-feel-pain-new-era