Question 1: The Road Not Travelled 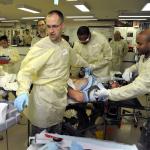 There was no way I was going to criticize Question 1, prosaically dubbed the Nurse-Patient Assignment Limits Initiative, in advance of Election Day. As a longtime labor advocate, I didn’t think it would be appropriate to publicly gainsay a decent union, the Mass Nurses Association (MNA). Even though I thought that its ballot campaign was a strategic miscalculation. But now that the election’s over and the PR dust around the effort is settling, I think it’s important to say something on the matter. Because I hate to see popular organizations I like make political moves that I view to be avoidable mistakes. And I really want the labor movement to go from strength to strength in this difficult era for working people. Not get crushed at the polls.

The referendum question, for those of you who need a refresher, aimed to mandate specific staff-to-patient ratios for registered nurses in the Bay State so that RNs would have fewer patients to care for on each shift in most situations. The aim of the initiative was to reduce overwork for RNs and improve patient care. Certainly laudable goals. And ones that the MNA and other advocates have been fighting to reach for years, according to the union’s own literature. In the course of that struggle, the MNA had tried to win better staffing ratios at the contract bargaining table, and in the regulatory and legislative arenas. All with limited success.

Finally, they decided to take the issue to the voters. A sensible step… when the other efforts didn’t bring the desired results.

But Question 1 was resoundingly defeated—with 70.38 percent voting against, and only 29.62 percent in favor. When just a couple of months ago, it looked like the union position might prevail. So I think it’s worth looking at why the initiative failed.

It’s certainly true that one reason for the outcome was that the hospital industry had significantly deeper pockets than the MNA and its allies. But only by a factor of two-to-one. Which is not terrible for this kind of David v. Goliath fight. According to Ballotpedia, the labor-backed Committee to Ensure Safe Patient Care raised over $11 million ($10 million plus of that sum from the MNA) to the hospital industry-supported Coalition to Protect Patient Safety’s $26 million ($25 million of that total coming from the Massachusetts Health and Hospital Association).

If Question 1 co-author 1199SEIU—a larger healthcare workers’ union—had not chosen to remain neutral on the question it helped draft, perhaps there would have been funding parity between the two sides. Yet even without the extra money and troops SEIU would have brought with it, the MNA put an impressive organizing campaign on the ground.

So I don’t think money’s the main factor behind the strong no vote on the MNA ballot effort.

I think the big problem with Question 1 was that it took a policy wonk approach that appeared to benefit a relatively small group of workers if passed. Rather than a rights-based approach that could have demanded direct benefits for a demonstrably larger community. Namely patients. A group that includes literally everyone in the state at one time or another.

So, as written, the referendum question appeared to mainly benefit registered nurses. And that is where the MNA and allies immediately ran into trouble. There aren’t that many RNs. According to the Mass Board of Registration in Nursing, there were 130,048 RN licensees in 2018. Which it says includes 12,112 active advanced practice registered nurses (APRNs)—mainly nurse practitioners with master’s degrees.

If we subtract the APRNs, we’re left with nearly 120,000 RNs of various types out of a total workforce of over 3,500,000. Or about 3.4 percent of Massachusetts workers. A significant group. But not a major group like, again, all the once-and-future patients in the state.

MNA definitely tried to target the political campaign around their initiative on benefits to patient safety. The difficulty the union faced there was that the language of Question 1 was quite obviously framed more around what was good for RNs than what was good for patients. Even its committee name pointed to “safe patient care”—wording aimed at nurses—while the hospital industry committee name directly mentioned “patient safety.” In a situation where the ballot campaign’s opposition seemingly put the interest of the much larger community of patients front and center while the MNA didn’t, the union lost control of its own narrative. Which probably resulted in the one group that should have backed the question strongly—RNs—being almost evenly split (48 percent for, 45 percent against) on it by the time of the vote, according to a poll by WBUR.

The nurses’ union also tried to make a yes vote on its initiative sound like a great struggle for the labor movement as a whole. Yet here again, it was hamstrung by the narrow language of its referendum question. MNA and other advocates strove mightily to show that a vote for Question 1 was a vote for all workers. But once people sympathetic to labor and the working class in general read the question, what did they see?

The question didn’t seek to expand workers’ power in any broad way. It didn’t try to expand patients’ rights, although it could have potentially improved their care. And it didn’t expand the rights of any other stakeholder communities.

dd to those problems the fact that Question 1 was too long—the summary presented on voters’ ballots was twice the length of either of the other two questions at 626 words—and too technical (using inside baseball language like “[t]he proposed law would also require every covered facility to develop a written patient acuity tool for each unit to evaluate the condition of each patient”), and it seems pretty clear in hindsight that the effort was doomed from the start. Matching the hospital industry dollar for dollar likely wouldn’t have changed the outcome enough for the MNA to win.

I’m writing this brief analysis to make sure that similar future efforts take such issues into account in advance. And that labor advocates choosing to embark upon referendum campaigns going forward make sure that they are rights-based and expand power for major communities of interest.

That is the path to victory for grassroots political campaigns of any type. Most especially ones aimed at expanding rights for working people and other currently disenfranchised groups.

Jason Pramas is executive editor and associate publisher of DigBoston. He is also network director of the Boston Institute for Nonprofit Journalism and founder of Open Media Boston. His column Apparent Horizon is the winner of the 2018 Association of Alternative Newsmedia award for Best Political Column.