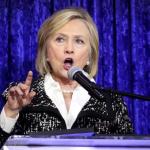 Ever since Hillary Clinton lost to Donald Trump in 2016, her insistence on staying in the public eye has been viewed with a particular kind of intolerance. Some on the right have turned her into a symbol of everything they hate, to be demonised at their rallies. Others, on the left, abhor her refusal to cede space to a newer generation, hanging in the air like a bad smell, a constant memory of the moment it all went wrong. But Hillary Clinton will not go away, and that is a very good thing. Not because she should remain on the scene, fighting the good fight against the forces of reaction, but because with every interview and public appearance she is revealing in the most helpful way the pointlessness of her politics.

In an interview with the Guardian as part of its series the new populism, the former presidential candidate illustrated how a certain brand of centrist politician has no rebuke or response to the far right other than to mimic their tactics. On the issue of immigration in Europe, she called on the continent’s leaders to erect the barricades.

“I think Europe needs to get a handle on migration because that is what lit the flame,” she said. “I admire the very generous and compassionate approaches that were taken particularly by leaders like Angela Merkel, but I think it is fair to say Europe has done its part, and must send a very clear message – ‘we are not going to be able to continue provide refuge and support’ – because if we don’t deal with the migration issue it will continue to roil the body politic.”

There is a fundamental error in this thinking. It assumes the results of populist politicking are in fact its sources. Clinton believes she is on to something, but it is offering nothing new. In the past two years accepting the populist version of events and painting the left as out of touch has become a genre of its own, a strain of thought that holds that the success of the immigration rhetoric of populists is organic, inevitable and a “backlash” of some sort, rather than one of several ways that populist politicians build grievance. National populism is thus “unstoppable”, it is the revolt of the “somewheres” against the “anywheres”, “white self-interest”, a “whiteshift”. Clinton’s “beat them at their own game” strategy is the default position on the establishment centre, a capitulation of laziness, defeatism and gullibility.

It also doesn’t work. It is one of the enduring perplexities of centrist politics, one whose adherents attack the left for being unrealistic and unconcerned with electoral victory, that on immigration it has stuck to pandering to xenophobia despite the benefit of that never materialising at the ballot box. It did not work for Ed Miliband and his “Controls on immigration” mug, and it certainly has not worked for the immigration hawks in his party such as Yvette Cooper who have yet to reap the electoral spoils of propping up the hostile environment. You cannot outflank the right by adopting its promises, that way you only end up as its handmaiden.

So much of the failure on immigration is the inability to make a positive case for it. Populist support did not flare up unstoked. It is the result of concerted media and political campaigns that at best were met with the neutral tepid language of “legitimate concerns”. That was what Angela Merkel attempted and for that Hillary Clinton patronises her as if she were a political freshman. Clinton’s logic is that “it is not working”, as opposed to “it is not right”.

This chilling pragmatism exposes at best a lack of core beliefs: political expediency is all that matters and immigration is not the hill to die on. At worst it is a full-throated agreement with populists. The tenor of Clinton’s comments, the harshness and impatience with tactics that are not working, is a familiar sickener. Compassion is weakness, defeat means only that the methods did not work, rather than that the values were broken. There is no self-reflection.

In her own America, Clinton does not see the disconnect between the populist posturing on immigration and the facts. Trump made clamping down on illegal border crossings with Mexico a winning electoral and polling strategy, despite the fact that such crossings hover at a 40-year historic low. In 2017, there were fewer deportations than in the previous year under Barack Obama. In 2016, only three of the 16 states with immigrant populations above 10% voted for Trump. In Europe, numbers are already down from their 2015-16 highs because of harsher measures, including a 2016 EU deal with Turkey, new border fences in the Balkans, and a 2017 bilateral arrangement between Italy and Libya. But Clinton, having learned a thing or two from populists who always claim the floodgates are open, is still calling for the barriers to be raised.

I get it. Defeat is hard. Immigration is low hanging fruit, an easy win. Even those on the left can contort themselvesinto an anti-immigration position in defence of white working-class populations. But as a response to the right it is a proven failed strategy, a race to the bottom where populists will only benefit from the endorsement. “Why we lost and how to fight back” was the title of the interview with Clinton and other centrist politicians – and she unintentionally revealed the real reason. This is why she lost, and this is why she will not be able to fight back. I sincerely hope the rumours she will run again in 2020 are true and that Clinton does not go away until this stale, weather-vane politics is exposed, and buried, for good.

Nesrine Malik is a Guardian columnist