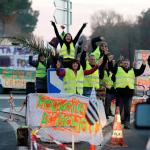 French President Emmanuel Macron isn’t a fan of protests. He has mocked union demonstrators in the past for being “lazy” and “cynical” and criticized his predecessors in the Elysée Palace for too easily succumbing to the demands of their critics. This presidency, Macron assured, would stick to its business-friendly reform agenda—even when unpopular. As the former investment banker and economy minister put it bluntly last fall, “democracy is not in the street.”

This is what makes the French government’s decision to cancel an increase in the fuel tax next year all the more extraordinary. After three weeks of protests that have grown increasingly violent—resulting thus far in three deaths, more than 800 injuries, and more than 1,600 arrests, as well as riots in some of the wealthiest neighborhoods of Paris—it has finally conceded to the central demand of the so-called gilets jaunes, or Yellow Vest, movement.

Those hoping for the protests to fade away, however, could be in for disappointment. The government’s move doesn’t address the deeper problems at the heart of the grassroots uprising. In the end, this was never just about the fuel tax.

Outside of major cities, most French people drive cars. It’s an activity that consumes a major chunk of their income—in general, much more so than drivers in the United States, where gross pay is higher and state governments maintain astonishingly low tax rates on gasoline. French people earn a monthly median income of €1,700, according to the state statistical agency, or about $1,900. Meanwhile, diesel fuel, which most drivers use, costs more than €1.50 a liter—equivalent to $6.74 a gallon. It’s grown even more expensive over the last year, with costs spiking by about 25 percent.

Frustrations with fuel prices began building this summer. But they reached a new level in September, when the government announced it would be hiking taxes at the pump a further 10 percent in January 2019. By the end of October, a Change.org petitiondemanding a “decrease in fuel prices” had garnered 500,000 signatures. After stumbling upon the petition that same month, truck-driver Eric Drouet created a vaguely worded Facebook page calling for a “national movement against tax increases” on November 17.

It was unclear what would happen. But more than 282,000 people ultimately responded to Drouet’s call—many of them manning traffic blockades in parts of the country not known for protests, from sparsely populated villages in Brittany to working-class suburbs on the Mediterranean coast. Since then, the number of demonstrators has actually declined. Just 106,000 nationwide turned out for an “Act II” on November 24, and 75,000 for an “Act III” the following Saturday. By French standards, these figures are modest. When unions turned out at least160,000 for a “day of action” to defend the “French social model” on a weekday in October, both the press and the government hardly blinked.

Nevertheless, the Yellow Vests have managed to seize the national spotlight, instilling a sense of fear among the political establishment not seen sincethe days of Nicolas Sarkozy and the unsuccessful 2010 protests against an increase in the retirement age. For one, that’s due to the violence, embodied by the internationally circulated images of burning cars in central Paris and anti-government graffiti staining the Arc de Triomphe. Still, an even greater factor is the movement’s seemingly spontaneous origin story—a haphazard discussion on social media that took off without the support of political parties or unions. While Marine Le Pen of the far right and Jean-Luc Mélenchon of the left have both endorsed the gilets jaunes movement and clearly hope to capitalize from its success, their respective parties have played a minimal role in the planning of the hundreds of nationwide protests.

Further contributing to the cloud of dread now enveloping the Elysée is the fact that the gilets jaunescount broad public approval—a rarity for any political movement in France. Not a single leading party enjoys close to majority support, according to opinion polls. And yet a poll conducted just after last Saturday’s riots in Paris showed that, while most disagreed with the use of violence, seven in 10 still backed the gilets jaunes movement as a whole. Support closely tracks class lines. According to a separate study released November 28, about four-fifths of working-class respondents—those defined as blue-collar and service-sector workers in France’s detailed socio-professional classification system—expressed sympathy or support for the movement. Just 56 percent of managers and white-collar professionals felt the same.

If the movement has managed to win such broad support thus far, it’s because it has clearly tapped into a deeper sense of social injustice. While that sentiment is shared nationwide to varying degrees, the protests themselves sprung up largely in rural areas and in what’s known as le périurbain: the sparsely populated outer bands of suburbs and metropolitan areas. These are parts of the country that suffer from high joblessness and rely heavily on state investment to keep their communities afloat, from unemployment benefits to the public rail network that connects them to larger cities.

High expectations of the state also come with close scrutiny over its actions. This attitude can be misinterpreted as hostility toward the very idea of public intervention in the economy—and, unsurprisingly, right-wingers from abroad have projected their own libertarian fantasies onto the wave of protest. But the fact remains that most gilets jaunes sympathizers in France are not opposed to the state’s role in the economy—they simply want it to act more fairly. Over the past decade, they’ve witnessed hospital closures, postal-service cuts, and rail reforms laying the groundwork for privatization and higher ticket prices, as in the United Kingdom. Much like spiraling fuel costs, these are not the sorts of things that keep wealthy people up at night.

Meanwhile, since taking office a year and a half ago, Emmanuel Macron has mandated further belt-tightening for the working class. In the name of fighting the budget deficit, local governments have seen subsidies for part-time jobs slashed, low-income people have suffered cuts in their housing aid, and retirees have been dealt reductions in their pension checks. The rich receive a very different sort of treatment: Overseeing his very first budget as president, Macron rushed to repeal France’s wealth tax, which had applied only to those with over €1.3 million in assets. This is why the notion of justice fiscale, or “tax justice,” figures so prominently among Yellow Vest sympathizers: Why should ordinary people, they ask, be forced to fork over another couple hundred euros each month while the super-rich are rewarded simply for being super-rich? Likewise, as outlandish as it may sound, many protesters are calling on the president to resign. Through both his policies that disproportionately benefit the rich and his tendency to ignore his critics, Macron exemplifies the state’s abdication of responsibility toward the least well-off.

At the same time, a non-negligible share of the Yellow Vests’ appeal flows precisely from their lack of clear demands. When two movement spokespeople appointed via Facebook met with environment minister François de Rugy last week and called on him to scrap the fuel-tax hike, they presented a larger platform of 47 demands. Also built through an online poll, it is a document fraught with contradiction: It calls on the government to cut payroll taxes for employers but also calls for a hike in the minimum wage and more progressive income taxes; it demands that immigrants better “integrate” into French society, but also that the government improve its treatment of asylum seekers. Other points of the platform take aim at France’s political institutions: abolishing the Senate, which is not directly elected by voters, and authorizing national referendums on questions that earn above a certain number of signatures.

With the government realizing protesters’ clearest demand, the movement’s next phrase is shrouded in doubt. While they enjoy momentum and show willingness to keep protesting, it’s not exactly clear just what demonstrators are seeking. Surely, not everyone agrees why precisely they’ve been in the street together in recent weeks. Nor among the sympathetic spectators is there a well-defined consensus about why they feel such attachment for those braving the tear gas over the past weeks.

In this vacuum, the more traditional pillars of the French left have sensed an opportunity. With the backing of student unions, middle-school and high-school students have walked out of at least 200 schools nationwide to protest recent reforms to the high-stakes baccalaureate exam as well as new higher-education admissions procedures. Some of their counterparts at universities in Paris have done the same over a recent hike in tuition fees charged to students hailing from outside the European Union. A prominent anti-racist group, meanwhile, has backed the Yellow Vests while calling for justice in the banlieues, the urbanized suburbs inhabited by many immigrants and French citizens of Arab and African descent.

Clearly caught off guard by the initial appeal of the movement, left-wing trade unions are seeking to turn out members and sympathizers, too. While it still hasn’t endorsed the Yellow Vests by name, the heavyweight General Confederation of Labor (CGT) has finally called for a nationwide “day of action” on December 14. It’s a clear attempt to turn France’s unexpected wave of contestation in a more progressive direction, to shift the conversation from tax relief toward hikes in direct compensation: The CGT is calling for an uptick in the minimum wage, an increase in pension benefits, and expansion of the safety net.

There is a kind of magical formula often invoked in French activist circles: the necessity for a convergence des luttes, or “a convergence of struggles.” To people who don’t spend much time thinking about politics, the term often comes across as hackneyed and utopian—the marker of a seasoned trade unionist out of sync with the rest of the population. With the former now taking the latter’s lead, the idea actually doesn’t sound so far-fetched today.

Cole Stangler is a Paris-based journalist writing about labor and politics. A former staff writer at International Business Times and In These Times, Cole has also published work in VICE, Dissent, and The Village Voice.

If you like this article, please give today to help fund The Nation’s work. DONATE