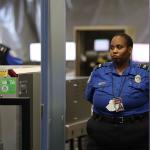 Washington (CNN)Hundreds of Transportation Security Administration officers, who are required to work without paychecks through the partial government shutdown, have called out from work this week from at least four major airports, according to two senior agency officials and three TSA employee union officials.

The mass call outs could inevitably mean air travel is less secure, especially as the shutdown enters its second week with no clear end to the political stalemate in sight.
"This will definitely affect the flying public who we (are) sworn to protect," Hydrick Thomas, president of the national TSA employee union, told CNN.
TSA spokesman Michael Bilello said the agency is "closely monitoring the situation" and that "screening wait times remain well within TSA standards," although that could change if the number of call outs increases.
At New York's John F. Kennedy International Airport, as many as 170 TSA employees have called out each day this week, Thomas tells CNN. Officers from a morning shift were required to work extra hours to cover the gaps.
Call outs have increased by 200%-300% at Dallas-Fort Worth International Airport, where typically 25 to 30 TSA employees call out from an average shift according to a local TSA official familiar with the situation.
Union officials stress that the absences are not part of an organized action, but believe the number of people calling out will likely increase.
Union officials stress that the absences are not part of an organized action, but believe the number of people calling out will likely increase.
"This problem of call outs is really going to explode over the next week or two when employees miss their first paycheck," a union official at Dallas-Fort Worth International Airport told CNN. "TSA officers are telling the union they will find another way to make money. That means calling out to work other jobs."
North Carolina airports, including Charlotte and Raleigh-Durham, have experienced 10% higher TSA call outs, according to Mac Johnson, the local union president. "That number will get worse as this drags on."
The call outs are "creating a vulnerability" and screeners are "doing more with less," Johnson said.
Two of the sources, who are federal officials, described the sick outs as protests of the paycheck delay. One called it the "blue flu," a reference to the blue shirts worn by transportation security officers who screen passengers and baggage at airport security checkpoints.
A union official, however, said that while some employees are upset about the pay, officers have said they are calling in sick for more practical reasons. Single parents can no longer afford child care or they are finding cash-paying jobs outside of government work to pay their rent and other bills, for example.
About a quarter of the government, including TSA and the Department of Homeland Security, have been without funding since December 22. Some 55,000 TSA employees who screen around 800 million passengers a year are considered essential and are among the 420,000 federal workers expected to continue working without pay.
"Call outs began over the Holiday period and have increased, but are causing minimal impact given there are 51,739 employees supporting the screening process," Bilello told CNN in a statement, adding that TSA had screened 2.2 million passengers Thursday and 99.8% waited less than 30 minutes. "Security effectiveness will not be compromised and performance standards will not change."
However, "Wait times may be affected depending on the number of call outs," Bilello said.
"TSA is grateful to the agents who show up to work, remain focused on the mission and respectful to the traveling public as they continue the important work necessary to secure the nation's transportation systems," he said.
TSA previously has said officers will eventually be compensated.
"We've never had a situation where officers did not get paid," TSA Administrator David Pekoske told reporters while demonstrating security procedures at a Washington-area airport days before the shutdown began. He said recent shutdowns have been "of a duration that it doesn't result in a delay in pay."
President Donald Trump and congressional leaders met Friday at the White House and are no closer to resolving the impasse. A shutdown could last months or even years, Senate Minority Leader Chuck Schumer quoted Trump as saying.

How TSA may address the problem

The number of traveling passengers has grown by about 4% each of the last few years, Pekoske said in September. He said the growth "without commensurate increases in the size of our Transportation Security Officer workforce ... has impacted both training and morale."
And TSA is bracing for more call outs next week, according to veteran field officials. That means TSA officials at airports around the country -- cognizant that long security lines frustrate passengers -- could have tough decisions to make, including whether to let passengers board flights with less scrutiny.
The big question is "How are they filling the void?" said one of the veteran TSA officials, voicing concern about the impact on security. "If you're not seeing long wait times at airports, there's something on the security side they're not doing."
Those officials say the potential options airports may use include fewer random pat down security checks on passengers, or giving passengers who have not been vetted for the PreCheck program an expedited screening. Airports struggling to staff checkpoints may also start reducing the number of lanes open to passengers, which will likely mean longer lines and waiting times.
Airports struggling with manpower issues could also opt to loosen standards for checked baggage based on a theory that people would not bring a bomb onto their own flights because the explosion would kill them, too. Known as positive passenger bag match, it presumes that if a passenger checks in and boards the flight, their checked luggage is safe, but some security experts are doubtful it is effective.
There are no indications that any of these measures have been necessary or implemented.