Senate Pressured to Defeat 'Unconstitutional' Attack on Right to Protest 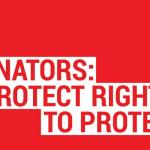 With the GOP-controlled Senate set to vote on legislation that would hand states more power to punish companies and individuals that participate in pro-Palestinian boycotts of Israel, rights groups urged people to contact their representatives and pressure them to block the "unconstitutional" legislation for the fourth time.

"What's one of the first things the Senate will vote on after finally opening the government? Answer: Undermining the First Amendment right to protest by penalizing those participating in the Boycott, Divestment, Sanctions movement."
—MoveOn.org

"Today at 5:30pm [ET] the Senate is voting on a bill promoting state laws that suppress the right to boycott Israel—even though multiple judges have found such laws to be unconstitutional," the ACLU declared in a tweet. "It's up to us to tell our senators: Hands off the right to boycott." (Note: The Senate passed a motion to proceed by a vote of 76-22 on Jan. 29.)

Targeting key Democratic senators directly on Twitter, MoveOn.org asked: "What's one of the first things the Senate will vote on after finally opening the government?"

"Answer: Undermining the First Amendment right to protest by penalizing those participating in the Boycott, Divestment, Sanctions [BDS] movement. No Senate Democrats should vote for this," the group wrote. "There's no 'compromise' that can come out of Republicans trying to sign away our rights. Any legislation that seeks to penalize or criminalize BDS participation is an attack on free speech and peaceful protest."

Sponsored by Sen. Marco Rubio (R-Fla.) and officially titled the Strengthening America's Security in the Middle East Act, Senate Bill 1 (S.1) is a package of legislation that includes the Combatting BDS Act, a bill that would give states and localities more legal authority to punish companies and individuals who engage in boycotts of Israel.

As Common Dreams reported, most Senate Democrats aligned against S.1 earlier this month, arguing that the Senate should not be pursuing any business unrelated to ending the government shutdown. Just four Democratic senators broke with their party to end cloture on the measure despite the shutdown: Bob Menendez (N.J.), Joe Manchin (W.Va.), Doug Jones (Ala.), and Kyrsten Sinema (Ariz.).

But now that the government has reopened—for now, at least—rights groups are alarmed that Senate Democrats who voted to block S.1 during the shutdown will flip their votes to "yes" because they support the contents of the legislation.

Cardin's bill, which the ACLU called a "full-scale attack" on the First Amendment, was co-sponsored by 15 Democratic senators and Sen. Angus King (I-Maine).

In a tweet ahead of Thursday's vote, Rubio pressured his Democratic colleagues to vote for his legislation, declaring that there "is no excuse not to move to it now."

As MoveOn noted on Twitter: "We've already seen the repercussions of local anti-BDS legislation across the country. An elementary school speech pathologist in Texas lost her job for refusing to sign away her constitutional rights."

"Democrats can stop this bill," MoveOn concluded. "Call your senators now and tell them to vote no on penalizing the boycott movement and undermining First Amendment in the process."