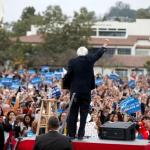 Socialism Is More Popular Than You Think, Mr. President

Most surveys show Trump would lose in a matchup against a democratic socialist named Bernie Sanders.

Donald Trump’s State of the Union Address did not feature a musical soundtrack. But, if it had, surely the orchestral accompaniment would have soared when he got to the line: “We are born free, and we will stay safe. Tonight, we renew our resolve that America will never be a socialist country.”

But, just as surely, the music would have quieted down as the camera shifted to the assured countenance of newly elected US Representative Alexandria Ocasio-Cortez, the New York Democrat who was elected last fall after campaigning as “an educator, organizer, Democratic Socialist, and born-and-raised New Yorker running to champion working families in Congress; or that of US Representative Rashida Tlaib (D-MI), who won her 2018 primary and general election races as a member of Democratic Socialists of America and was endorsed by DSA’s muscular chapter in the Detroit area. And the music would have stopped when it got to Vermont Senator Bernie Sanders, who is often referred to as “America’s best-known socialist,” and whom a lot of people would like to see challenge Trump in the 2020 presidential race.

The president might have wanted the joint session of Congress, and the American people who bothered to listen in, to believe that “Here, in the United States, we are alarmed by new calls to adopt socialism in our country. America was founded on liberty and independence—not government coercion, domination and control.”

But every recent national poll of prospective 2020 voters has Sanders, the democratic socialist, beating Trump, the socialism basher.

A PPP survey released January 22 had it Sanders 51 to Trump 41. That was an improvement on the nine-point lead a PPP survey gave the senator last June.

When CNN polled prospective 2020 voters last year, it was Sanders 55 to Trump 42.

In the battleground state of Michigan, which Trump narrowly won in 2016, a new Detroit News/WDIV-TV poll has Sanders leading by 11 points.

A PPP survey of North Carolina voters, which was conducted last month, put Sanders ahead 48-45 in another state that the Republicans won in 2016.

Sanders has not announced that he will challenge the president. But the senator, who won 23 primaries and caucuses as a contender for the 2016 Democratic presidential nomination, generally polls near the top of the Democrats and independents who will judge the wide field of 2020 Democratic prospects. (He’s behind former vice president Joe Biden but ahead of all or most of the other announced and prospective candidates.)

Biden often polls a point or so better against Trump than does Sanders in hypothetical matchups for a 2020 general election contest. But Sanders tends to run better than other Democratic prospects.

So it doesn’t seem like the “s” word is dragging the senator down.

Perhaps that is because, while Trump may think “socialism” is a scare word, and while many prominent Democrats may get scared when it is referenced, Sanders is comfortable discussing the ideology. “Do they think I’m afraid of the word? I’m not afraid of the word,” says Sanders.

That’s how Sanders does it. He’s not defensive. He’s aggressive. While Trump equates the humane democratic socialism that millions of Americans embrace with “government coercion, domination and control”—in a desperate attempt to narrow the discourse—Sanders makes honest comparisons that expand and enhance the dialogue.

The numbers don’t tell us that America is a socialist country. But they do suggest that Americans are intrigued by socialism as an alternative to capitalism. Thirty-seven percent of Americans now view socialism positively, according to a Gallup survey from last year. And among the rising generation of voters, the numbers are substantially higher. “Americans aged 18 to 29 are as positive about socialism (51 percent) as they are about capitalism (45 percent),” explains the Gallup analysis. “This represents a 12-point decline in young adults’ positive views of capitalism in just the past two years and a marked shift since 2010, when 68 percent viewed it positively.”

Another set of numbers may be even more telling. Membership in Democratic Socialists of America has spiked from 7,000 members in 2016 to over 55,000 today. And dozens of democratic socialists now serve in elected posts, from the US Senate to the US House to state legislatures and municipal governments and school boards across the country.

“He sees that everything is closing in on him,” says the democratic socialist, who is advancing a Green New Deal plan and proposing tax hikes for the rich. “And he knows he’s losing the battle of public opinion when it comes to the actual substantive proposals that we’re advancing.”

"Every single policy proposal that we have adopted and presented to the American public has been overwhelmingly popular, even some with the majority of Republican voters."

While Republicans and many Democrats rose and enthusiastically applauded President Donald Trump's attack on socialism during his State of the Union address Tuesday night, Rep. Alexandria Ocasio-Cortez (D-N.Y.)—who, along with Sen. Bernie Sanders (I-Vt.), remained seated—said the president's remarks showed he's "scared" of the progressive policies that most Americans are embracing.

"He sees that everything is closing in on him. And he knows he's losing the battle of public opinion when it comes to the actual substantive proposals that we're advancing."

Speaking to reporters after Trump proclaimed that "America will never be a socialist country," Ocasio-Cortez said the president felt the need to lash out at socialism because bold progressives have gotten "under his skin."

"I think he's scared," said Ocasio-Cortez, a self-identified democratic socialist. "He sees that everything is closing in on him. And he knows he's losing the battle of public opinion when it comes to the actual substantive proposals that we're advancing."

While right-wing pundit Peggy Noonan criticized Ocasio-Cortez for remaining stoic during most of Trump's address, the congresswoman later explained Trump gave her no reason to feel "spirited and warm":

"Every single policy proposal that we have adopted and presented to the American public has been overwhelmingly popular, even some with the majority of Republican voters," said the New York congresswoman. "When we talk about a 70 percent marginal tax rate on incomes over $10 million, 60 percent of Americans approve it."

"Seventy percent of Americans believe in improved and expanded Medicare for All. A very large amount of Americans believe that we need to do something about climate change, and that it is an existential threat to ourselves and to our children," she continued. "What we really need to realize...is that this is an issue of [an] authoritarian regime versus democracy." 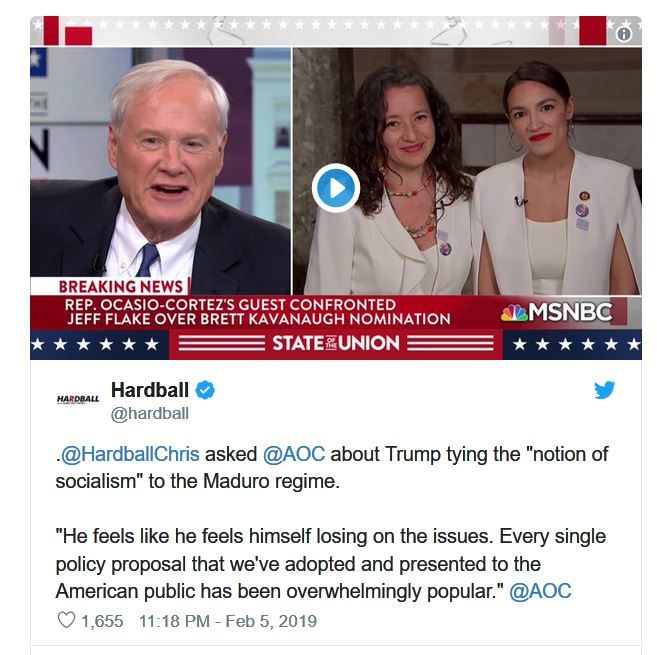 "I love it when the president helps me make the case that it's socialism or barbarism," wrote Sarah Jones of New York Magazine.

Branches of the Democratic Socialists of America (DSA)—whose membership has soared to record levels since Trump's election—said they expect a nice membership bump after the president's address.

"We look forward to seeing the new members who come to our next meeting after the presidential insistence we will never live in a socialist country," declared DSA's Eugene, Oregon branch.