Race, Not Abortion Was the Founding Issue of the Religious Right 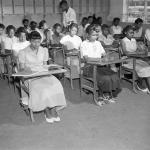 In 1971, two years before Roe v. Wade legalized abortion, the biggest white evangelical group in America, the Southern Baptist Convention, supported its legalization. The group continued that support through much of the 1970s. And the late Jerry Falwell, founder of the Moral Majority, did not give his first antiabortion speech until 1978, five years after Roe.

Though opposition to abortion is what many think fueled the powerful conservative white evangelical right, 81 percent of whom voted for Donald Trump, it was really school integration, according to Randall Balmer, chairman of the religion department at Dartmouth. The US Supreme Court ruled public school segregation unconstitutional in 1954. In 1976 it ruled against segregated private schools. Then courts went after the tax exemptions of these private all-white Southern schools, or so-called segregation academies, like Falwell’s Liberty Christian Academy.

The late Paul Weyrich, whom Balmer called the organizational genius behind the religious right, had long tried to mobilize evangelical voters around some hot-button issue: feminism, school prayer, pornography, abortion. But nothing lit a fire like the federal government’s threat to all-white schools. Only in 1979, a full six years after Roe, did Weyrich urge evangelical leaders to also crusade against abortion, Balmer said in an interview. That was, after all, a far more palatable, acceptable crusade, one with a seeming high moral purpose, unlike a race-based crusade against black children.

I mention all this because Politico recently reported on the increasing power of religious ultra-conservatives in Trump’s Department of Health and Human Services, and what that could soon mean for further restrictions on abortion, birth control, and gay and transgender protections.

“This administration is focused on recognizing one set of religious beliefs,” Gretchen Borchelt of the National Women’s Law Center told Politico. But why the one set of beliefs so out of step with the rest of America? Though 70 percent of white evangelicals want abortion illegal, the majority of other religious groups, including mainline Protestants, black Protestants, and Catholics, do not.

This raises unsettling questions: How much of antiabortion rhetoric is really about the unborn, and how much is a convenient and even cynical cover for white evangelicals to support, as they did, a white supremacist like Roy Moore, in Alabama, or Trump himself, leader of the American birther movement and defender of neo-Nazis in Charlottesville, Va.?

Balmer’s scholarship on the racial underpinnings of the religious right — and the link between the antiabortion movement and a certain political agenda — is more than familiar to a group of Americans who overwhelmingly rejected both Moore and Trump. That would be black evangelicals.

Among them is Cornell William Brooks, past national president of the NAACP and a fourth-generation African Methodist Episcopal Church minister who was arrested last year during an Alabama sit-in to protest Trump’s then nominee for attorney general, Jeff Sessions.

“Wring your hands over the child lost in the womb as well as the loss of the child Tamir Rice,” the 12-year-old gunned down by a police officer in Cleveland. “Be concerned about discrimination, immigration, police misconduct, voter suppression, misogyny on the lips of the president, black lives mattering, all lives mattering,” Brooks said.

Said Brooks, “We are not being candid with ourselves if we don’t admit race has a lot to do with all this.”

Said Balmer, “The religious right is coming back to the founding principles of a movement based in racism.”