A Vision of Equality, Diversity and Basic Respect at Work 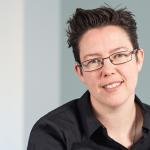 HE star-studded British LGBT Awards take place in central London in May. Nadine Rae has been nominated in the Future Leader category to mark the work she is pioneering in the rail industry to challenge stereotypes and make the world of work properly inclusive of diversity.

She leads from the front. And it is her simple but effective poster campaign in which she showcased LGBT+ rail industry workers, members of her union, to lend their photographed profile to confront stereotypes.

Rae speaks to the Morning Star about the award and her ambition for transforming the hegemonic male rail industry into a beacon of inclusiveness by 2025:

My role model poster promotes the message: “I am a lesbian, mother and senior trade union leader” — many people are surprised by that combination.

Working in the trade union movement for 20 years in a variety of contexts throughout the world, I have always been been very aware of my contribution as a woman, but it is only in the past few years I have realised how much of my identity as a lesbian has contributed to my vision of an ideal workplace culture.

My ambition for the world of work is to grow workplaces where everyone can be their authentic self at work, and is accepted for their individuality and as a result have their unique contribution acknowledged.

To get there, we must of course be paid a decent wage but also valued beyond our contribution of production.

This requires a commitment to value diversity over the familiar, acceptance and curiosity of others, flexibility in working practices and quite frankly, kindness.

Without kindness, everything else leads to disconnection, isolation and ultimately unproductive and unsafe workplaces.

If people had not been kind to me when I needed it most, I would not have overcome any of the challenges I faced as a minority in any part of my life.

Kindness is not often spoken of as part of leadership, certainly not often in the railway, but I join a growing number of leaders who are doing just that.

It is a huge honour to be the first trade unionist nominated in any category in the National LGBT+ Awards. I am of course very proud of this achievement.

Our general secretary Manuel Cortes has been unstinting in his support for TSSA to lead the LGBT+ change in the still all too male-dominated world of transport.

But it is the members of our union who have stepped up as LGBT+ role models and leaders to make a new pathway for others to follow who have my admiration.

Their courageous willingness to stand up for respect and equality is inspiring others to do the same every day.

I know because the numbers of members getting active in our LGBT+ Network has tripled since 2017.

I am grateful for the National LGBT+ nomination for the award. But as Olivia Coleman said of her Bafta, the award should be shared with others. And it is the brave souls in our union who are standing up for inclusion who are now empowering the changes to come.

My own journey is reflected in the work I lead at TSSA. Through significantly increasing our focus on equality, diversity, inclusion and basic respect at work, our leaders and members have realised this is the way to grow and strengthen our union. Striving for equality is now integral to the core part of TSSA’s mission.

We have not done this alone. TSSA’s work with Stonewall has helped shape our vision for not just LGBT+ people. In the journey towards LGBT+ inclusion, we are tackling not only homophobia, biphobia, transphobia, but bullying and harassment culture overall.

It is now widely accepted amongst senior rail professionals that this cannot prevail. Skills shortages and the changing nature of rail work due to technological advances means there is a need to attract and retain new people – the limitations of the pool from whence the railway found its workers in the past cannot sustain the future.

In 2018 I led the launch of our Inclusive Rail campaign, to make the railway inclusive for LGBT+ people by 2025.

This year TSSA members are asking people what that means to them. In doing so TSSA is leading the challenge to the rail industry to become inclusive for LGBT+ people and in fact, just plain inclusive.

I am proud to be part of this important work, proud that I can help shape the pathway for other LGBT+ people and be a role model for lesbians and other queer women.

The British LGBT+ Awards dinner and ceremony will be hosted by Graham Norton in London in May. For more details of TSSA’s Inclusive Rail campaign go to mstar.link/TSSAInclusiveRail.