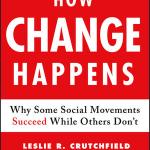 How Change Happens: Why Some Social Movements Succeed While Others Don't

Wouldn’t every nonprofit leader want the blueprints for how to launch her campaign or cause successfully? Social change cannot be reduced to a formula, but there may be patterns across effective efforts that can illuminate the way for others. This is what Leslie Crutchfield (coauthor of Forces for Good) and her research team set out to identify in How Change Happens.

While some of the points are fairly obvious and even verge on tautological, Crutchfield captures some key insights for nonprofit leaders. Most striking is the transformative effect of creating a sense of belonging and empowerment, the success of the National Rifle Association and gun rights being the most poignant illustration. Some five million strong, members mobilize at town hall meetings and get decision makers to heed their minority views on weaker gun regulations. Why do so many people show up? The formal NRA Grassroots Division maintains a visible and constant presence while at the same time empowering their “Frontline Activist Leaders,” volunteers who reach out to other gun owners in their own communities, building support for political action. Most effective, still, may be their regular NRA barbecues, shooting competitions, and other family gatherings.

Examples throughout showcase the importance of personal connection and human emotion, perhaps a reflection on why the left—often focusing instead on abstract reasoning around justice and equality—has largely failed to mobilize in recent decades. By contrast, the anti-drunk driving campaign, as portrayed by Crutchfield, derived its momentum from the families of victims, spotlighting individuals with lived experience. Similarly, the marriage equality movement, as captured in an interview with the director of the Freedom to Marry national campaign, became successful when it pivoted from being about rights and legal protections to people and love.

Yet people and love do not always win the day. The NRA’s emphasis on rights has also been a potent mobilizing force. The question of whether the lived experiences of schoolchildren, parents, and community members across the country outweigh the gun rights of Americans is now being waged. And we have yet to see whether a focus on black lives will fundamentally alter race relations in this country.

Indeed, few of the tactics in the author’s framework are without counter-examples. In other words, these tactics may be neither sufficient nor necessary for success. The anti-tobacco movement, for example, was successful despite rancorous internecine fighting. Crutchfield frequently acknowledges that “what works for one movement or cause doesn’t always neatly translate to other issues,” a reminder that campaigns and movements are indeed messy business, not architected on blueprints.

The book is framed as a response to the shortcomings in the social movement literature. While Crutchfield is right to note that predominant theory still hinges on movements of the 1960s and 1970s, much of the current literature does not. While that literature is often inaccessible to the broader public (movement scholars take note!), it does exist—beyond the very thin citation of scholarship therein.

Given that the main target audience is nonprofits, however, the book resonates with others of its kind, such as Forces for Good and Good to Great, providing valuable perspective for civil society leaders aiming to catalyze social change.

Karina Kloos is global advocacy manager for Landesa, an international nonprofit working to secure land rights worldwide, and coauthor of Deeply Divided: Racial Politics and Social Movements in Post-War America. She received her PhD in sociology from Stanford University, where she researched nonprofits, international development, and social movements.