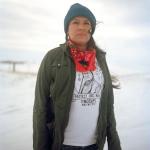 “Loss. Defeat. Dismissal. This is what happens when greedy corporations go after Indigenous women grounded in the power of Prayer, the power of relationship building, and the power of collective organizing,” said Krystal Two Bulls after learning of her victory. “Not only was my right to free speech upheld by this decision, but also my rights as an Indigenous woman to steward this land. Now, more than ever, we ALL need our Rights to share our voices uplifted, supported and protected.”

Lawyers for Ms. Two Bulls argued that the allegations against her consisted entirely of constitutionally protected activity and did not even come close to racketeering. Energy Transfer sought to hold her liable under the federal Racketeer Influenced and Corrupt Organizations (RICO) act for millions of dollars of supposed damages from the protests. In the decision, Judge Billy Roy Wilson noted the “hyperbole” in Energy Transfer’s filing and explained, “[d]onating to people whose cause you support does not create a RICO enterprise… Posting articles written by people with similar beliefs does not create a RICO enterprise.” Attorneys say the entire lawsuit was an attempt to recast collective political action as an unlawful conspiracy.

“Energy Transfer failed in its embarrassing and expensive attempt to silence organizers who stand for justice,” said Astha Sharma Pokharel, a legal fellow at the Center for Constitutional Rights. “Their baseless lawsuit should never have been filed, but yesterday’s victory will only strengthen the movements they tried so hard to suppress.”

Lawyers say the lawsuit was a textbook example of a “strategic lawsuit against public participation,” or SLAPP, a form of legal bullying. The goal of a SLAPP is not to win, but to burden the defendants with costly and time-intensive litigation procedures, while creating a chilling effect that discourages others from speaking out on issues of public concern. The Judge’s swift dismissal suggests that the federal judiciary may be losing patience with these abusive tactics.

“This is a major win not just for Krystal Two Bulls but for all those that corporations have tried to silence, simply because they have exercised their rights to speak out against injustice and environmental abuse, “ said Marco Simons, General Counsel at EarthRights international. This decision to dismiss Energy Transfer's vengeful lawsuit sends a clear message to others considering such tactics: U.S. courts will not help corporations deny the people's First Amendment rights.

Ms. Two Bulls is represented by attorneys with EarthRights International and the Center for Constitutional Rights, both members of the Protect the Protest task force. Protect the Protest was created in 2018 to end the use of SLAPPs against those working in the public interest.

The Center for Constitutional Rights works with communities under threat to fight for justice and liberation through litigation, advocacy, and strategic communications. Since 1966, The Center for Constitutional Rights has taken on oppressive systems of power, including structural racism, gender oppression, economic inequity, and governmental overreach. Learn more at ccrjustice.org.