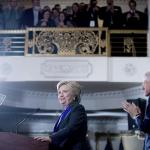 An attempt at an Electoral College workaround is gaining momentum in the Mountain West.

Democrats in Colorado and New Mexico are pushing ahead with legislation to pledge their 14 collective electoral votes to the winner of the national popular vote — no matter who wins each state.

The plan only goes into effect if the law passes in states representing an electoral majority. That threshold is 270 votes, which is the same number needed to win the presidency.

Democrats have been stung by the fact that President Trump's victory marked the second time in five cycles that a Democrat lost the presidency while winning the popular vote. 2016 was the most egregious example, with Hillary Clinton winning 3 million more votes than Donald Trump, but losing the election. It was the largest margin ever for someone who won the popular vote, but lost the Electoral College.

Proponents of the national popular vote measures have argued that it's not political, but Republicans, who have benefited in recent elections from the Electoral College system, disagree.

And while a majority of the country has expressed support for giving the presidency to the person who wins the most votes — 55 percent in the latest Pew Research Center poll — there are sharp partisan divides. Three-quarters of Democrats are in favor of amending the Constitution to do so, but less than a third of Republicans are.

So far, 11 states — including New York, California and New Jersey — have joined the effort along with the District of Columbia, putting the effort 98 votes short of its goal.

Colorado appears poised to join as the 12th state. The state legislature passed the bill Thursday, and Gov. Jared Polis is expected to sign it. In New Mexico, the legislation is awaiting consideration in the state Senate after the House approved it earlier this month.

If the bills pass, it would show the plan has momentum outside of the Coastal U.S., especially in places where Democrats have full control of state government.

John Koza devised the plan and chairs the organization behind it. Koza also co-invented the scratch lottery ticket and taught computer science at Stanford. He turned his attention to the Electoral College, however, after growing frustrated with "winner-take-all" laws.

Koza said the rules are why presidential candidates only campaign in a handful of states. He recognized what might be a potential loophole in the Constitution — that while the Electoral College is in the Constitution, nothing says a candidate who wins a state has to get all of its electoral votes.

"The political power to the choose the president was basically given by the founders to the state legislatures," Koza said. "And over the years they've passed different laws specifying how to allocate their state's electoral votes."

In fact, Maine and Nebraska do not have "winner-take-all" systems. They allocate their electoral votes to presidential candidates by congressional district, with an additional two electoral votes going to the winner of the state.

Colorado state Sen. Mike Foote, who's sponsoring legislation, insisted that it's not a partisan response to Trump's 2016 win. Rather, he said, it's about upholding the democratic principle of one person, one vote.

"It's about time that every vote in the country counts equally," he said. "Right now, if you live in a state that is not a battleground state, then your vote doesn't count nearly as much."

Republican state Sen. Jerry Sonnenberg, who represents the plains east of Denver, worries about the impact of a popular vote on rural America. He said it would lead candidates to only campaign in the largest media markets, like New York and Los Angeles.

"You drop us from nine [electoral] votes to 5.5 million people, all of sudden Colorado is irrelevant," he said. "This is all about making sure presidential candidates realize Colorado is important to the rest of the country."

That partisan divide isn't limited to Colorado. Across the country, pollsters have seen a steep drop in Republican support for a popular vote for president since 2016. National Popular Vote's Koza said it has been much harder to get Republicans to support his plan in recent years.

While those opinions could change over time, it signals the compact is unlikely to succeed in the short-term. Only Democratic-leaning states have joined so far. Swing states, like Ohio and Florida, have the least reason to sign on, which means it likely needs support from deep red states.

There's also a broader question as to whether it would be constitutional. The Electoral College is clearly written into the nation's founding document. Some insist that Congress would have to approve it since it would overhaul national election procedures. Other scholars have argued that states can't bind their electors to voters outside their boundaries.

Koza insists Article II gives states broad power to decide how they choose electoral delegates. Still, he expects a series of lawsuits if enough of the National Popular Vote efforts went into effect.

Seth Masket, a political science professor at the University of Denver, said those legal battles are a long way off. In the short term, he sees it as a way to center a familiar debate over the unique way the country decides its president.

"It's about saying the status quo is unacceptable," he said. "This might not be the best way of changing it, but it's at least a way of forcing some change and forcing some discussion of it."