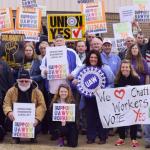 For the third time in five years, auto workers will vote on whether to form a union at the country’s sole Volkswagen plant, located in Chattanooga, Tennessee.

On Tuesday, the United Auto Workers (UAW) filed for an election to represent all 1,709 of the plant’s hourly employees, requesting that the election be held on April 29 and 30.

The union’s first attempt in 2014 failed after a slim majority of workers voted no, following a barrage of threats by politicians and business-backed anti-union groups.

In the second attempt, a group of 160 skilled-trades workers in the plant in 2015 voted to join UAW Local 42. But that smaller unit has yet to secure a first contract.

Now the union is moving forward with an election at the 1,400-acre Chattanooga facility after it says it signed up 65 percent of the hourly workers, including skilled trades, on union cards.

Workers in the plant are likely to face another onslaught of threats and lies from politicians and anti-union groups. As of yet, the company has not commented on whether it will remain neutral this time around.

The UAW has long sought voluntary recognition from Volkswagen.

Under the Co-Determination Act in Germany, where Volkwagen is based, employees and representatives of labor hold half the seats on the automaker’s international Supervisory Board, providing the union with allies in the corporate hierarchy.

In 2013, two years after the Chattanooga plant opened, Volkswagen appeared eager to partner with the UAW to organize the first German-style “works council” in the U.S.

In theory, such a works council would consist of representatives from both labor and management and would meet to make collective decisions pertaining to production goals, working conditions, work pace, and other plant issues. The idea was that this works council would operate alongside a union, with a collective bargaining agreement covering only a handful of topics including wages and benefits.

But Tennessee Republicans, who controlled the governor’s office and both legislative houses, weighed in on the other side, threatening to torch hundreds of millions of dollars in government assistance promised to the company if it chose to recognize the union voluntarily. VW bowed to political pressure and refused to recognize the UAW without an authorization election.

However, the company did enter into a 22-page neutrality agreement with the union.

This deal had some downsides for the UAW. The agreement barred organizers from visiting workers at home to talk about the union and assess their support. A non-disparagement clause prohibited the union from publicly organizing around the issues that workers faced in the plant.

Still, the UAW enjoyed a degree of employer neutrality that would have been unimaginable at Nissan, Toyota, Mercedes-Benz, or BMW. VW didn’t follow the typical anti-union playbook of threats, promises, and captive-audience meetings.

But if the company largely sat out the fight, corporate interest groups were more than happy to pick up the slack and fight against the union themselves. Anti-union consulting groups backed by a host of funders from anti-tax operative Grover Norquist to regional businesses flooded Chattanooga with anti-union newspaper editorials and radio ads, purchased billboards, and produced videos on social media.

The anti-union groups also organized local events featuring prominent community leaders including the head of the local Tea Party, state legislators, and a right-wing professor at a local college. Workers attending these event were provided copies of the neutrality agreement, which many workers saw as a secret deal between the company and the union, and were told that the UAW had already sold them out by agreeing to keep labor costs and production “competitive” with other companies.

Former U.S. Senator Bob Corker promised that Volkswagen would expand production and bring more jobs to Chattanooga if workers voted down the union.

Following that loss, the UAW chartered the “members-only” Local 42 and continued to push for voluntary recognition, which was not forthcoming.

Eventually the union settled for another election, this time limited to a small subset of the workforce: 162 skilled-trades employees whose job is to maintain machines in the plant.

This was made possible thanks to the National Labor Relations Board’s 2011 Specialty Healthcare ruling, which gave unions greater latitude to determine which workers to include in the bargaining unit. Rather than having to run an election covering every hourly employee, the union could focus on the area of the plant where it had always had the greatest level of support.

In 2015, this maintenance unit voted 108 to 44 in favor of organizing, giving the UAW its first union election victory at a foreign-owned automaker in the U.S. South.

In direct violation of federal labor law and any professed claim to union neutrality, however, Volkswagen refused to bargain with the newly organized unit. The company continued to file appeals as the case wound its way through the NLRB and the courts over several years.

Then Donald Trump was elected president.

Trump appointed an anti-union majority to the Labor Board, which overturned the Specialty Healthcare decision. Following the Board’s reversal, the D.C. Circuit Court ruled that the UAW election should be handed back to the Trump Labor Board for review—all but guaranteeing that the UAW’s election win would be overturned.

The Chattanooga plant currently produces the Passat, a mid-sized sedan, and the Atlas, an SUV.

Volkswagen recently announced plans to spend $800 million and hire 1,000 more employees at the factory, part of a planned expansion aimed at producing a line of electric vehicles for the North American market by 2022. Those plans could help to alleviate fears that the plant will close in reaction to unionization.

Auto Workers could definitely use some good news. The UAW, one of the most powerful private sector unions to emerge from the industrial organizing of the first half of the twentieth century, has been severely weakened.

The union has lost two-thirds of its membership over the past four decades. It has made massive contract concessions to employers. And a recent corruption scandal has rocked the upper echelons of the union’s leadership.

The union has lost several high-profile organizing drives, including a rout in the 2017 election at Nissan’s plant in Canton, Mississippi.

A single election victory won’t completely reverse the UAW’s problems—but a win in Chattanooga could provide a foothold in the South.

First, though, Chattanooga workers will have to face down the inevitable onslaught of anti-union attacks.

“So it’s not just about signing that card. It’s about knowing that they are willing to take action and stand up and fight inside of that facility.”

Whether we're reporting on a struggle across the street or around the world, Labor Notes delivers the best labor news and analysis available.

A must for anyone interested in putting the movement back in the labor movement.