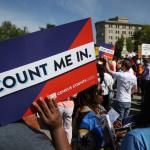 This week, the Supreme Court heard arguments as to whether or not the Trump administration can add a citizenship question to the decennial census. The malicious intent of this question ought to be glaringly apparent. When a nativist administration — which has from the get-go hammered at the rights of immigrants, especially those who are poor and of color, and which has unleashed federal agencies to do their worst against vast numbers of people — asks such a question, it does so in the hope that it will scare immigrants away from participating in the census. Why is that important? Because both political representation and the flow of federal resources are largely dependent on population estimates. If an immigrant-heavy state such as California ends up with fewer residents participating, its official population suddenly dips, it is awarded fewer congressional seats, and fewer tax dollars flow toward its infrastructure investments and an array of other public expenditures. Scare enough immigrants into invisibility, and you can thus dramatically shift the political dynamics of the country.

But while the citizenship question is now in the spotlight, it is actually only one of several ways in which the Trump team, with active help from the GOP in Congress, has deliberately sought to undermine the functioning of the Census and the reliability of its findings.

Census watchers know, from experience, a lot about the rhythms of the 10-year project. They know, for example, that the closer one gets to a Census year, the more money has to be allocated to the Census Bureau. They know that whenever new information-gathering technologies are rolled out, it’s vital that the Bureau be able to send out field representatives to do large-scale test runs so that there aren’t glitches during the actual census. They know that when more of an emphasis is placed on online responses and less on mail-in paperwork or the physical collection of questionnaires, rural areas and poor residents without access to reliable at-home internet are less likely to fill in the forms. And they know that it is much harder to get high response rates from Black, Asian, Latinx and immigrant communities, as well as from poor residents, than it is from many whites, especially from affluent, home-owning whites.

Even when everything’s humming along smoothly, and even when a government is in power that doesn’t consider it a national pastime to hurt immigrants, these truths hold. Even in less reactionary times, statisticians estimate a 2.1 percent undercount of Black people and a 1.5 percent undercount of Latinx people, with an even worse under-count among the poorest members of these groups; and a corresponding 0.6 percent over-count of home-owners and 0.8 percent overcount of whites. After the fact, based on careful sampling, the statisticians then have to try to moderate the final numbers to get at something that approximates an accurate final count.

But in 2019, with the census only a year away, almost nothing’s humming along smoothly. Behind the scenes, from the moment the Trump gang took power, they have worked to incapacitate the Census Bureau. Data is, after all, power; and if you can manipulate the data to favor your constituencies, you magnify your power accordingly.

The citizenship question is only one of several ways in which the Trump team has deliberately sought to undermine the functioning of the Census.

In 2012, the GOP-run Congress ordered the Census Bureau not to spend more on the 2020 census than it spent on the 2010 census, despite a decades-long trend toward increased expenditures as the U.S. population grew both in size and in complexity. Since Trump assumed office, the financial constraints imposed on the Census Bureau have only grown.

For fiscal year 2018, Trump requested only $1.684 billion for the Bureau; even Congress balked at that, eventually signing off on $2.814 billion. But this amount only partially fills a shortfall that, year upon year, has grown and shows every sign of continuing to grow.

For Fiscal Year 2019, Trump requested $3.8 billion for the Bureau, of which just over $3 billion would actually go toward the 2020 census. By contrast, in 2009, a year before the last census, the Bureau received $4.2 billion. Next year, experts such as those working with The Census Projectbelieve the Bureau will need a budget of well over $8 billion to run a successful Census. But, to the chagrin of numerous members of Congress who have written letters urging higher appropriations, Trump has requested only $5.885 billion in new spending. Even Trump’s own parsimonious Commerce Department has estimated that the Bureau needs roughly $7 billion in 2020.

The Trump administration has asked for Census Bureau budgets that don’t even begin to keep pace with the financial needs of the Bureau.

This make-do-with-less approach permeates all aspects of the Census. Under Trump’s watch, the Census Bureau has had to slash by half the number of regional and area offices it runs. These are offices strategically situated around the country that are vital to reach under-served communities that, traditionally, the Census has found it hard to build rapports with. Reduce the presence of such on-the-ground offices and you all-but-guarantee lower participation by members of these communities.

The Bureau has argued that it can save some dollars by aggressively moving to a more online-based system. But, strapped for funds, it has done so without fully planning for how that impacts response rates. It hasn’t worked out effective back-up plans for areas and population groups with low internet connectivity. Making matters worse, in 2017, the Bureau was so cash-strapped that it also had to cancel entire test-runs of new information-gathering technologies. And the Bureau, faced with a chronic funding shortfall, hasn’t been able, or willing, to hire nearly enough partnership specialists who can be sent out to work with local communities to ensure high participation levels so that many cities and states have had to simply go ahead and set up their own teams of specialist workers to help fill the gap.

Taken as a whole, these assaults on the integrity of the Census can’t merely be seen as incompetence or over-zealous fiscal caution. The Census is being constricted in a very particular set of ways, all seemingly intended to massively curtail the participation of immigrants, of non-white Americans, and of poor Americans.

Under Trump’s watch, the Census Bureau has had to slash by half the number of regional and area offices it runs.

Statisticians can go in after the fact and do limited best-guess fixes to ensure accuracy. But if the drop-off rates in participation are too extreme, as advocates fear they will be given the ongoing efforts to squeeze the Census Bureau, at the end of the day it’s entirely probable that some groups will be invisibilized while other groups end up significantly over-represented. That will, if it is allowed to stand, have massive effects on the way our democracy functions, artificially shrinking the political representation of some counties and states while inflating the representation of others. Similarly, it will end up reducing the federal dollars invested in under-counted communities while boosting the dollar amounts that flow into over-counted ones.

As in George Orwell’s Animal Farm, in Trump-land all are created equal, it’s just that some of the pigs are more equal than others.

Sasha Abramsky is a freelance journalist and a part-time lecturer at the University of California at Davis. His work has appeared in The Nation, The Atlantic Monthly, New York Magazine, The Village Voice and Rolling Stone. Originally from England, he now lives in Sacramento, California, with his wife, daughter and son. He has a masters degree from Columbia University School of Journalism, and is currently a senior fellow at the New York City-based Demos think tank.