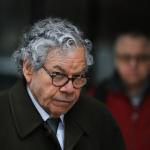 Insys Therapeutics Inc. founder John Kapoor was convicted of a racketeering conspiracy that drove sales of a highly addictive opioid while contributing to a nationwide epidemic.

Kapoor is the first chief executive officer of an opioid maker to be convicted at a trial. The verdict signals that the public is willing to hold pharmaceutical executives accountable for the U.S. crisis and comes as thousands of state and local governments press civil lawsuits against drugmakers to recover billions of dollars spent combating the epidemic.

“A conviction will embolden prosecutors in other cases,” Paul Kalb, a partner at Sidley Austin LLP who specializes in health-care fraud, said in an interview. “Kapoor will be plainly portrayed as one of the instigators of the opioid crisis. But the truth is this is a very complex problem that was not caused by any single person or company.”

The verdict came on the 15th day of deliberations after a 10-week trial. It marks a steep downfall for Kapoor, who worked his way from modest means in India to start what would turn into a multibillion-dollar drugmaker. Still Insys’s controlling shareholder, he will be forced to sell his shares and may face huge financial penalties.

Kapoor looked down as the verdict was read, his hands folded in front of him. The judge denied a U.S. request that Kapoor be placed under house arrest before he’s sentenced. The maximum penalty is 20 years behind bars.

“Dr. Kapoor is disappointed in the verdict, as are we,” defense attorney Beth Wilkinson said. “Four weeks of jury deliberations confirm that this was far from an open-and-shut case.” She said they’d keep fighting to clear Kapoor’s name.

Even though Kapoor has stepped down as Insys’s chairman and CEO, he still holds more than 60 percent of its stock.

“Kapoor’s shares have been and will remain managed by an independent trust with which Kapoor is not involved,” Insys spokeswoman Jackie Marcus said in a statement. “It is expected that this arrangement will continue pending final decision on the disposition of those shares.”

Marcus said the actions of a “select few former employees” aren’t indicative of the work conducted by the the team at Insys who, she said, have dedicated themselves to improving the lives of patients. The Chandler, Arizona-based drugmaker’s shares fell 1.7 percent to $4.15 Thursday in New York trading.

Kapoor remains the majority shareholder in another pharmaceutical company, Akorn Inc. Akorn shares fell 1.8 percent in New York. The stock is down more than 20 percent this year.

The verdict could also jeopardize Kapoor’s stake in Akorn. The Department of Health and Human Services has power to bar persons convicted of certain crimes from holding a 5 percent or greater stake in a company that receives federal health-care dollars.

Lee, a single mother of two, was near tears as her mother hugged her after court. “We were expecting a different result,” her lawyer, Peter Horstmann, said.

At the trial, prosecutors took jurors deep into the inner workings of Insys while putting on display some of its more sensational practices. Some of the government’s 39 witnesses offered racy testimony about how the company lured doctors into writing more Subsys prescriptions with sexy sales reps, lap dances and lavish dinners at restaurants that Kapoor owned. Prosecutors said Kapoor and his subordinates used a speaker’s program to bribe doctors who pushed their drug.

Defense lawyers took aim at the prosecution’s case through aggressive questioning of government witnesses, seeking to show that the case was weak. The defense took just two days and featured a handful of their own witnesses, including a patient who vouched for the benefits of Subsys.

Neither Kapoor nor the other defendants testified.

Prosecutors -- including Assistant U.S. Attorney Fred Wyshak, who made his name targeting organized-crime figures in Boston -- methodically built their case over the years, bringing their first charges in 2015 against lower-level executives before charging Kapoor in 2017. The defense painted the government’s witnesses as the real villains, saying it was Burlakoff who came up with the idea of shoveling money to doctors while keeping that information away from Kapoor.

In 2014, according to Symphony Health Solutions, Subsys had a 41.6 percent share of the rapid onset opioid market for drugs that act quickly to treat moderate to severe pain. Insys reached a valuation of $3.2 billion in July 2015, almost 10 times higher than its current one.

The jury’s verdict is likely to register in drugmakers’ board rooms. Companies including Teva Pharmaceutical Industries Ltd., Purdue Pharma LP, Johnson & Johnson and Endo International Plc are preparing to face trials over allegations by states and local governments that their sales campaigns fueled a crisis which is costing billions of dollars annually.

Meanwhile, efforts to use the legal system to hold executives accountable for an epidemic that claims more than 100 Americans’ lives daily are gaining speed. The Sackler family, Purdue’s billionaire owners, is facing a new wave of lawsuits over its role in the marketing of OxyContin. They, like the companies, deny wrongdoing.

“Just as we would street-level drug dealers, we will hold pharmaceutical executives responsible for fueling the opioid epidemic by recklessly and illegally distributing these drugs,” Massachusetts U.S. Attorney Andrew Lelling said in a statement. “This is a landmark prosecution that vindicated the public’s interest in staunching the flow of opioids into our homes and streets.”

Kapoor faced a single charge of a racketeering conspiracy. The first person in his family to attend college, he earned a doctorate in medicinal chemistry at the University of Buffalo in 1972, according to a work-history the school posted.

He was a plant manager at Invenex Laboratories in New York and later became chief executive officer of LyphoMed, a hospital-products company. He sold LyphoMed to Fujisawa Pharmaceuticals and formed a venture capital firm that invested in health-care companies.

“Working in health care is a public trust,” said Peter Pitts, the president of the Center for Medicine in the Public Interest and a former Food and Drug Administration associate commissioner. “If companies choose to sell drugs inappropriately to increase profits, the FDA and courts will step up to the plate and make sure they’re not able to do so.”