At Christian Zionist Gathering in Texas, Trump is God’s Cyrus, and Bill Maher is ‘Stupidest Jew in Hollywood’ 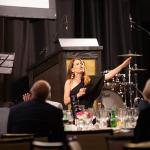 The Democratic-leaning American Jewish community is becoming increasingly queasy about a U.S.-Israel relationship in the form of a Trump/Netanyahu alliance.  The U.S. is now unabashedly aligned with the far-right, rabidly militaristic, anti-democratic elements in the Israeli government (as opposed to the more acceptable, Obama-style tut-tutting, which purported to distance itself from the more embarrassing Israeli atrocities).  The American Jewish community was apparently only willing to tolerate fascism at a distance, where orientalist tropes enabled the human rights violations to be justified in the “rough neighborhood” of the Middle East. But Donald Trump has brought home what that looks like domestically, and the American Jewish community can no longer fail to notice who they are in bed with.

Israel’s plan B for shoring up U.S. support is to cultivate a much more natural alliance with the white Christian evangelical Zionist community, who don’t need to be mollified with the fantasy of an eventual two-state solution. San Antonio, Texas, is home to the traditional bastion of white Christian Zionism, Rev. John Hagee’s Cornerstone Church, which runs the organization Christians United for Israel. But new initiatives are appearing.

When the Jerusalem Prayer Breakfast, a self-described “prayer movement” announced it would be coming to San Antonio, April 11 to 12, several members of the local chapter of Jewish Voice for Peace decided to attend. The annual event in Jerusalem is hosted by the Israeli government and brings hundreds of evangelicals to the Holy Land. It was founded by the Israeli Knesset in 2017 and spearheaded by Israeli member of Knesset Robert Ilatov with former Congresswoman Michele Bachmann. The sister event in Texas that we attended is also co-chaired by Ilatov and Bachmann, and was hosted by the Justice Foundation, a conservative legal action group that files cases aimed at limiting access to abortion and expanding Christian prayer in Texas public schools. A Facebook page for the event was made by a digital marketing consultant for the Trump 2016 campaign, Adam W. Schindler. It was a merger of the conservative to reaching-far-right end of political life in both Israel and the U.S.  We wanted to learn what we could about the group itself, and about Christian Zionism as it continues to gain political traction.

At the “Jerusalem Prayer Breakfast Texas” we heard a lot of familiar themes from the Christian Zionist playbook at the founders dinner: the use of the Bible as a roadmap for a political agenda.

From the podium Michele Bachmann raised the notion that Trump is an agent of God who will fulfill the apocalyptic prophecies to restore Jerusalem to the Jews as a condition for the return of Christ; evangelical speaker and author Lance Wallnau made comparisons between Trump and Cyrus; the Tea Party’s Louie Gohmert (R-TX) linked CAIR to ISIS and the Muslim Brotherhood in a healthy dose of Islamophobia. Texas Republican Congressmen Brian Babin and Ron Wright also gave speeches, along with Israeli lawmakers, the event’s founder Robert Ilatov of the extreme right Yisrael Beiteinu party, and Likud’s Anat Berko, infamous for, among other antics, attempting to outlaw displays of the Palestinian flag within Israel.

The consequence of their brand of political theology, as the participants made quite clear, was an open contempt for democracy.  Our government should not be responsive to the collective wishes of the citizenry – it should follow the Bible. Trump should not listen to expert advisers – he should follow the signals that several speakers suggested he is apparently receiving from God. Israel should not heed international law or any secular peace process; “there is only one peace process,” some of the speakers said, and it involves absolute territorial dominance, because this is what is promised in the Bible.  Their political vision is blatantly theocratic.

When Israel is mentioned in the context of state religion, the religion at issue is generally taken to be Judaism.  This was clearly not the case with the prayer breakfast which, despite describing itself a “Jewish-Christian alliance” had an exclusively Christian theocratic agenda.  This distinguishes it somewhat from Hagee’s Cornerstone Church. One participant said she is from the group One for Israel, a proselytizing organization that describes its mission as “Reaching Israelis with the Gospel message.” She confided to me that she has nothing to do with Hagee because he is too reticent about dictating his agenda to Jews – he fails to evangelize – and has therefore diluted and betrayed the purity of the Christian mission.

For many at the event, Jewish dominance over a Greater Israel is a means to a dispensationalist Christian apocalyptic goal, so there was the appearance of a unified Jewish-Christian front.  The Members of Knesset and rabbis in attendance seemed willing enough to tolerate the crazy theology for the sake of material support.  But I was struck by how close to the surface the antisemitism really was. And I don’t just mean the antisemitism inherent in their apocalyptic theology (Jews will convert or die when Jesus comes again).  I mean literal “Jew joke” antisemitism.

For instance, at one point Lance Wallnau referred to Bill Maher as “the stupidest Jew in Hollywood,” to general laughter.  Another speaker bemoaned the inability of Jews to vote in Israeli elections, without any apparent worries about falling into the “dual loyalty” trope.  Ilatov joked that “Jews only accepted the ten commandments because they got them for free” (a remark that drew appreciative and extended laughter from the audience) before clarifying that “the truth is they are free for everybody.” This is not a reference to an antisemitic joke.  This is actually making an antisemitic joke, to a highly receptive audience.

And then there was breakfast.  Registrants had not been asked about food choice, and we were simply presented a plate of food at the start of the event.  The plate consisted of scrambled eggs, beef brisket hash, and pork sausages, accompanied by a yogurt drink. Nobody seemed perturbed, although several hours later, the director announced, awkwardly, incongruously, and without context, that the sausages had been chicken, not pork.  Not only was this a bald lie (I know what pork tastes like), it hardly made the meal kosher.

However insane and political incoherent this group might be, we need to take them seriously.  They clearly wield significant and increasing political power, and they have found in Trump someone who will defy diplomacy and the traditional political channels to help get them what they want (annexation of the Golan Heights, the embassy in Jerusalem, and as a wish list for the future: war with Iran, annexation of the West Bank, criminalization of BDS, and Israeli control of the Temple Mount).

At the same time, this new shift in political fortunes, as the Israeli right seeks to ally with American Christians rather than American Jews, presents new opportunities for resistance.  Liberal Zionist Jewish communities might not want to call out the Israeli right, but they can surely call out the Christian right; aside from being hosted by the Justice Foundation, the Jerusalem Prayer Breakfast Texas included representatives from the NRA.  They have no interest in democracy or even Jews. Their Zionism is antisemitic.

The masks are off – this is a moment of clarity and one we can use to our advantage.

Judith Norman teaches philosophy at Trinity University in San Antonio, Texas and is a member of Jewish Voice for Peace

Mondoweiss brings you the news that no one else will. Your tax-deductible donation enables us to deliver information, analysis and voices stifled elsewhere. Please give now to maintain and grow this unique resource.