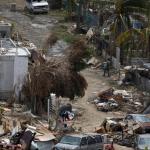 Here is a scandal: Puerto Rico has a Financial Oversight and Management Board (FOMB), created by the US Congress and appointed by the president of the United States, in charge of its finances. Its budget, financed by Puerto Rico’s taxpayers, is $1.5 billion over five years, or $300 million a year.

How much money is that relative to Puerto Rico’s economy? Well, if it were the US economy, it would be more than $85 billion dollars a year. To be clear: this is not a government, but just a board that examines and projects the government’s finances. Imagine if the US Congressional Budget Office had a budget of $85 billion a year (its actual annual budget is $50.7 million).

The vast majority of the FOMB’s budget ($1.1 billion) goes to advisers and consultants. And there are serious potential conflicts of interest among the board itself.

How can this scale of corruption, overseen by the US Congress, even happen? It’s because Puerto Rico is a colony of the United States. Puerto Ricans are US citizens but they have no voting representatives in the US Congress. Yet they are bound by its decisions, and those of the executive branch.

For the same reasons, Puerto Rico was vastly unprepared when Hurricane Maria hit the island on September 20, 2017. And the US government’s response to residents’ emergency needs was painfully slow and negligent. A video of President Trump tossing rolls of paper towels, as if they were puffy basketballs, at a press conference in a church in San Juan, on October 3, 2017, was hideously symbolic. An estimated 3,000 people died from the storm, many of them from lack of access to medical care that could have been provided with a proper response to the disaster. Electricity was only fully restored almost a year later.

“The US government explicitly said because Puerto Rico was our colony, we will not allow you to … adopt your own bankruptcy law … but as a colony we have decided that our bankruptcy law won’t cover you either… And it's a moral outrage.”

The recent restructuring of part of Puerto Rico’s debt ― bonds backed by sales tax revenue ― will not leave the economy with a sustainable debt unless the other creditors give up vastly more. They will fight this outcome, and also fight to get as much of the hurricane relief money as possible in their pockets. The Board seems willing to help them with cuts in public spending and needed services, while making overoptimistic assumptions about future economic growth, thus allowing more money to go to debt service.

Puerto Rico was already stuck in an unusually long economic decline ― also resulting in large part from its colonial status ― before the devastation of Hurricane Maria. In August of 2017, it had already suffered a lost decade, going without economic growth since 2005. Its poverty rate was 58 percent, about three times that of the 50 US states. And the FOMB approved an austerity program that forecast a second lost decade ― no economic growth through 2024. An economic decline of this duration is extremely rare.

The Board has a new plan that is more optimistic, and less realistic, than the old one. There is a serious risk that it will again get caught in a downward spiral of austerity to pay for unsustainable debt service, more emigration, and continued economic decline. This is too high a price to pay for being a colony of the United States.