The War on Brazilian Democracy 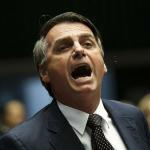 It has been nearly five months since Jair Bolsonaro became president in Brazil. The changes are hard to characterize simply.

On the one hand, the political spectacle that Brazilians have grown accustomed to has only become more surreal, as the self-styled strongman appears to have started to flail. Riding a wave of anti-establishment and anti-left backlash, Bolsonaro was elected by an unlikely coalition of religious conservatives, elites, and dissatisfied popular sectors, with the explicit backing of the military establishment. Today, the former army captain and contrarian congressman has found himself unable to deliver on campaign promises because of congressional deadlock and his own motley cabinet, made up of climate-change deniers, free-market ideologues, and ultra-right conspiracy theorists.

Brazilians’ feelings about him and his movement have also proven to be more fickle than anticipated. As unemployment and inflation have increased, opinion surveys have recently shown that only a third of Brazilians now find his government “positive,” the lowest recorded percentage for this stage of a presidency in the nation’s redemocratized period, beginning in 1985. Massive protests against Bolsonaro’s anti-education statements paralyzed major cities on May 15, while the traditionally pro-business newspapers Folha de São Paulo and Estadão have begun to publish sharply critical editorials. His relationship with the military establishment has begun to fray over his bellicose pronouncements about Venezuela. And just as Brazil’s courts have also put breaks on his penchant for presidential decrees (such as the one arming public school teachers), convincing evidence connecting his sons to paramilitary militias and death squads in Rio de Janeiro has emerged, raising the concrete possibility of impeachment and arrest.

Borrowing from the global would-be-despot playbook, Bolsonaro has responded by declaring a state of permanent war with “the traditional media” and with political opponents, while playing to his most loyal base. When cornered, he calls out bogey-man politics—the establishment, communism, political correctness, or in one case, the disciplines of sociology and philosophy. This tactic is regularly punctuated by a string of gaffes and absurdities on Twitter and elsewhere, from describing Nazism as an outgrowth of leftism, to wanting to stop gay tourism to Brazil, to calling on Brazilian men to have better intimate hygiene, and his unforgettable Twitter battle with New York City Mayor Bill De Blasio following his embarrassment at the cancellation of a reception planned for him at the American Natural History Museum. There has also been the presidential decree of abolishing Daylight Savings Time, followed by an advisor’s announcement that he would very soon abolish “three-prong plugs, electronic voting machines, and the new spelling.”

On the other hand, even in the absence of legislative and policy successes, the president’s office has managed to carry out potentially irreversible damage, much of it below the radar via appointments, decrees, and funding streams.

The disastrous nomination of Ricardo Salles—a pro-business climate change denier—as minister of environment is a case in point. It prompted a meeting of all prior environmental ministers since 1985 to release a statement expressing alarm at the sharp reversal of environmental policies, as well as a letter by more than 600 European scientists condemning deforestation and attacks on indigenous lands in the Amazon. Indeed under Salles, the government has effectively defunded environmental protection and turned a blind eye to illegal timber activity, land grabs, and deforestation. The government has also removed the authority of the indigenous affairs agency over land issues, granting it instead to the agriculture ministry. And Bolsonaro has continued to promise further environmental deregulation, recently proposing to turn protected forest areas in Rio de Janeiro state into “Brazil’s Cancún.” Similarly, the new minister Abraham Weintraub has moved to defund public higher education, while singling out universities and departments that have been home to particular dissidence; his predecessor, who lasted fewer than three months on the job, worked to remove “gender ideology” and “leftist influences” from primary education. And Brazil’s top diplomat, Eduardo Araújo, has threatened to destroy Brazil’s international reputation with his threatening discourse on Venezuela and his adoring selfies with Italian neo-fascists.

Much less visible abroad, but no less consequential for Brazil’s democracy, is the Bolsonaro regime’s efforts at dismantling the country’s institutions of participatory democracy, primarily its system of councils. Since the transition to democracy in 1985 there has been a widely shared sense—among activists, scholars, and the architects of the transition—that the nation, as an extremely diverse and deeply unequal society, needed something beyond traditional institutions of representative democracy. The first post-dictatorship constitution of 1988, which was partially crafted by proposals for new forms of direct democracy, in fact emphasizes this idea in its very first paragraph, which opens with the words, “All power emanates from the people, who exercise it through elected representatives or directly.”

Principal among these forms of direct democracy is the Brazilian structure of councils, which Bolsonaro has attempted to dismantle via a series of presidential decrees in April and May that would abolish 55 of the 90 or so councils. Drawing on the idea of social democratic “council democracy,” councils are permanent standing bodies for state-society dialogue, and for social control of state institutions. Both main ruling political parties of the 1990s and 2000s—the center-right Brazilian Social Democracy Party and the left-wing Workers’ Party—invested in these councils, giving them increased prominence and status over two decades.

Unlike their Scandinavian counterparts, Brazilian councils are not limited to sectoral representation, and they have tended to be much more plural in terms of themes. This has been the case since the Workers’ Party national administrations beginning in 2003. Lula’s first two terms saw the creation of some forty new councils. By mid-2014 there were more than ninety functioning councils on issues from the elderly, disabilities, cities, youth, culture, environment, LGBT issues, and AIDS, among many others. It is difficult to estimate how many people have participated in all of these instances, as subsequent governments promoted countless public hearings, workshops, forums, and national conferences. Multiplied by local instances—nearly all cities have at least some functioning councils on various areas of service provision—a conservative guess would be that millions of Brazilians have participated in some forum or another to make their voices heard.

These councils generally do not have binding decision-making power over various ministries; they are generally considered consultative. But in a socially divided apartheid country such as Brazil, the fact that high officials in all ministries have to participate in councils and listen to ideas and demands of underprivileged populations can’t be dismissed. To put it another way: for all of its deficiencies, Brazilian democracy nonetheless managed to open its institutions to underprivileged populations and interests that historically have always been excluded from decision-making processes, constituting institutional arenas in which this conflict could be expressed politically. And the councils have often been extremely consequential: many of the innovative policies of social inclusion in Brazil in the last few years, from the recognition of Maroon community rights to the progressive curriculum on homophobia, emerged there.

Bolsonaro’s decrees abolishing councils have been challenged to the Supreme Court as a result of a lawsuit by the Workers’ Party. And in response to the decree and, more broadly, the attack on the rights to participation and social control, a network of researchers, activists and members of participatory institutions created the #OBrasilPrecisadeConselho Campaign. It is too early to know whether these mobilizations and legal strategies can act in time to prevent the destruction of the councils, as so much else in Brazil.

It is the very idea of democracy as a project of inclusion—of recognition of difference and diversity—that Bolsonaro has declared war on. This was already clear during the elections, when he declared that he would “put an end to all Brazilian activism,” just as it has been clear with his attack on councils. Add to this many other developments—his regime’s stance in support of the use of weapons by farmers against landless activists; the rejection of the very idea of rights by indigenous populations in their territories; the effort at abolishing gender-progressive education in schools; his obsession with internal enemies—and a very grave picture emerges of where this political project is headed.

Brazil continues to be a country in crisis, and in this climate it seems anything is possible. The mobilizations in defense of his regime yesterday show both his desperation and a troubling further polarization of his supporters. We do not know how long Bolsonaro will remain president, whether the coalition of interests that brought him to power will engulf him, and whether the democratic resistance will be able to stymie these authoritarian efforts long enough for an alternative.

But we worry that his regime will damage the country’s democracy in ways that are irreparable. Closing down channels for the recognition of difference and diversity of opinion will not do away with conflict, as is Bolsonaro’s dangerous authoritarian fantasy. Calling political opponents mortal enemies does not make opposition go away; it only creates mortal enemies and the justification for their elimination. The likelier result of the reduction of democratic spaces is that conflicts will come to express themselves in other ways—including, potentially, through violence. Brazil had already been living through an extremely violent period before the elections. Yet, in the first three months of 2019, Rio has seen the highest number of police killings ever recorded in that city under governor and Bolsonaro ally Wilson Witzel, thanks to his “shoot-to-kill” directives to the military police.

We worry this could just be the beginning.

While we have you...

...we need your help. You might have noticed the absence of paywalls at Boston Review. We are committed to staying free for all our readers. Now we are going one step further to become completely ad-free. This means you will always be able to read us without roadblocks or barriers to entry. It also means that we count on you, our readers, for support. If you like what you read here, help us keep it free for everyone by making a donation. No amount is too small. You will be helping us cultivate a public sphere that honors pluralism of thought for a diverse and discerning public.