In Support of Reproductive Justice 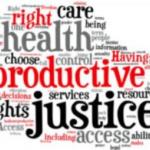 The National Women’s Studies Association (NWSA) is a professional association of feminist scholars committed to social justice and academic inquiry. We strongly condemn the current attacks on reproductive choice and add our voice to the chorus of opposition. Autonomy over our bodies, including our reproductive choices, is fundamental. NWSA members have upheld this principle in our scholarship and practice for over four decades. We reiterate it today in these urgent times.

The new spate of laws limiting the right to abortion that is sweeping the country is alarming. In the past few months Alabama, Kentucky, Georgia, Mississippi, Ohio, and Missouri have passed restrictive legislation with other states poised to pass similar laws. In most of these cases, state legislators have made abortion illegal when a so-called “fetal heartbeat” is detected, which is usually around six weeks; in reality, what is being measured is fetal cardiac pole activity, since a six-week fetus does not have a heart.  Alabama’s law goes further and prohibits all abortion except when necessary to save the mother’s life. The aim of these laws is to overturn Roe v. Wade, the 1973 Supreme Court decision legalizing abortion.

The women’s movement of the 1960s and 1970s saw reproductive rights as inextricably linked to liberation and the full personhood of women, fighting on multiple fronts to ensure that women have freedom to control their reproduction, including abortion rights, an end to forced sterilization, access to birth control and the expansion of social and economic support for poor mothers and children. More recently, “reproductive justice” has been elaborated by Black women and other women of color as a broad framework that names these historic struggles and offers a human rights basis for the fight, saying that every individual must have the right to decide if and when they will have a child and the conditions under which they will give birth; decide if they will not have a child and their options for preventing or ending a pregnancy; parent the children they already have with the necessary social supports in safe environments and healthy communities, and without fear of violence from individuals or the government; and, have bodily autonomy free from all forms of reproductive oppression.

Since the passage of Roe v. Wade, there has been a concerted effort to undermine the substance of the Supreme Court decision. In 1977, Congress passed the Hyde Amendment, which prohibited federal funding for abortion and made it less accessible to poor women. In addition, states have imposed prohibitive regulations on abortion providers, imposed a “global gag rule” that denies US federal funding to any overseas organization that provides or even counsels women on abortion, and instituted myriad other measures.

The current spate of laws affects all people who can get pregnant, but hits poor women, women of color, gender-variant, and trans individuals the hardest since they often have fewer options. NWSA stands firm in its support of reproductive justice and condemns any attempt to curtail or control the reproductive decisions of anyone.

SIGNED by the Executive Committee (EC) with affiliations*

(*affiliations for identification purposes only)