The Green New Deal is More Than a Climate Plan, It's a Model for Building Worker Power 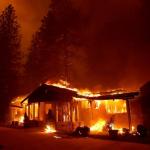 Last week, the 2 million-member Service Employees International Union was proud to become the largest labor union in the country to back the Green New Deal, one of the most comprehensive responses that has been offered to date to address the crisis of climate change.

Climate proposals like the Green New Deal are an urgent priority for SEIU members like Francisca Reyes, a janitor in Texas, whose daughter and her family needed to evacuate their home after Hurricane Harvey. While they were staying with Reyes, her own roof collapsed. SEIU later worked with Reyes to fix her house.

And they matter to people like Charissa Fitzgerald, an SEIU-United Healthcare Workers West member and certified nursing assistant in Chico, California, who lost her home and all her belongings in the Camp Fire, the worst wildfire in California's history. In less than 24 hours, everything she'd ever known had burned to the ground.

Reyes and Fitzgerald are just two of the growing number of people in our union whose lives have been turned upside down by climate change. But the Green New Deal is more than a plan for transitioning the U.S. economy out of fossil fuels. It's also a model for how lawmakers should design any proposal to restructure the economy—by putting worker power and unions at the center.

At the heart of the Green New Deal is a recognition that the shift from fossil fuels to clean energy could leave many workers behind. That's why the plan protects and increases workers' right to organize on the job by shoring up collective bargaining rights, calling for universal health care and retirement security, and providing a guarantee of a good union job with family-sustaining wages and benefits for anyone who wants one.

We need this kind of climate plan more than ever today. But the energy industry isn't the only sector undergoing a transition—the U.S. economy as a whole is at a turning point as we shift from manufacturing to service jobs, and as technological advancements upend entire sectors.

The rapid growth of the service industry in particular has posed significant challenges to working families. Too many service jobs don't let families make ends meet, with low wages, no health insurance or retirement benefits, and no voice on the job to advocate for a safer and healthier workplace.

In coming years, these jobs will increasingly fuel our economy—the Bureau of Labor Statistics estimates that the service industry is the fastest-growing part of the economy, and that low-wage service jobs will drive the bulk of employment growth over the next decade. In the face of that stark reality, we need to make service jobs the kind of jobs that families can rely on—and that means protecting and boosting workers' right to organize.

And so elected leaders need to develop additional ambitious proposals modeled on the Green New Deal that give workers a stronger voice on the job in industries all across the economy. Just as we need elected officials to hold fossil fuel companies accountable for pollution, we also need to hold other companies with a history of exploiting low-wage workers to account.

Workers across the service industry, from fast food to airports to home care, have already made clear their demands from lawmakers and powerful employers: a livable wage, decent benefits, better working conditions—and the right to a union on the job. Workers have not just demanded that right: From coast to coast, they have stood up, spoken out, and gone on strike in support of unions for all.

We need elected leaders to stand with workers and pursue bold new ideas that center union rights as a solution to the greatest challenges in our economy today.

We must demand, for one, that corporations that do not provide livable wages and benefits give workers a seat at the table to shape their workplace—and that includes fast-food chains like McDonald's just as much as it does clean energy companies like Tesla.

And we should pursue proposals on the scale of the Green New Deal that allow workers in other rapidly growing sectors to organize and expand unions on the job.

By guaranteeing more workers the right to join unions, we can transform our economy and our democracy. The Green New Deal has opened the door to bigger and bolder ideas. It's up to us to follow.

The views expressed in this op-ed are the writer's own.