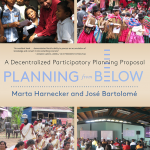 Political scientist, author, and activist, Marta Harnecker devoted her life to collaborating in building radical democracy in Latin American communities where people have, for generations, experienced crushing poverty and a near complete loss of control over their lives. In South America and the Caribbean, but especially in Cuba and Venezuela, Harnecker has worked directly with disenfranchised workers and peasants. From the ground up, she has helped to build new structures and methods that bring to virtually unknown towns and provinces the full meaning of the Bolivarian revolution. In this latest work, Harnecker, with Spanish economist José Bartolomé, shares some of her wisdom on how this is being done, and how communities everywhere can gain empowerment. For, when impoverished people became involved in the planning process, they no longer feel like beggars demanding solutions from the state; they become the creators of their own destiny.

Set out in two parts, this book first demonstrates the importance of community participants working outside a hierarchy, to allow as much decentralization as possible. Anything done at a “lower level” is carried out at that level, as people propose, develop, and implement their own initiatives. The second part of the book centers on the methodology of this process: the various tasks taken on by participants and how, in planning processes over years, they are carried out. We learn how to create a database; how to formulate and prioritize aspirations and to convert them into specific projects; even how to integrate all this into an overall budget outline. Amid volumes of political theory discussing “The Revolution,” Planning from Below offers uniquely simple, yet revolutionary, tools to help any group of people anywhere, live in an actual democracy.

An excellent book, simple to read, easy to understand.… [E]ach reflection demonstrates Marta’s ability to process an accumulation of knowledge and convert it into something concrete.

To order this book from Monthly Review Press click here

Marta Harnecker wrote over eighty books and monographs in several languages, including Understanding the Venezuelan Revolution and A World to Build: New Paths toward Twenty-First Century Socialism, which won the Libertador al Pensamiento CrÍtico award. She has been director of the Memoria Popular Latinoamericana research center in Havana, Cuba and the Centro Internacional Miranda in Caracas, Venezuela. Harnecker was born in Chile, studied with Louis Althusser in the 1960s, and edited the magazine Chile Hoy (Chile Today) during Salvador Allende’s Popular Unity government. She died in June 2019.

José Bartolomé, born in Spain, is an economist, sociologist, and documentary filmmaker. Since 1974, he has collaborated on various writings with Marta Harnecker.