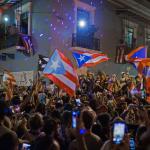 Shortly before noon in San Juan on Wednesday, with the resignation of the Puerto Rican governor, Ricardo Rosselló, thought to be imminent, a group of protesters circled under the midday sun, banging pots and pans with wooden spoons and holding Puerto Rican flags. The epicenter of the protests was the intersection of Calle del Cristo and Calle de la Fortaleza, in the touristy neighborhood of Old San Juan. It was a picturesque setting, with cobblestone streets and pastel-painted colonial apartment buildings whose wrought-iron balconies overlooked the crowds that gathered below day and night. The entrance to the Fortaleza, the governor’s mansion, was a block away, and the baby-blue-and-white façade of the sixteenth-century palace gleamed in the sunshine, its flags fluttering in the breeze.

At some point during two weeks of demonstrations, protesters had changed the street signs. Cristo now read “Calle del Corrupto” (Street of the Corrupt) and Fortaleza, “Calle de la Resistencia” (Street of the Resistance). Standing on top of a concrete barricade that kept the demonstrators from going the last block to the mansion, a man dressed in red—red Adidas T-shirt, red shorts, red-and-white-checked Vans sneakers—served as a majorette for the circling demonstrators, keeping time with a whistle. “Ricky! Renuncia!” they shouted—the words had become the hashtag for a movement that had preoccupied the country for the past two weeks. Behind the barricade, about a dozen police officers stood in formation, wearing flak jackets, khakis, polo shirts, and visored helmets, their legs spread, faces sweating behind polarized sunglasses.

The crisis that led to the protests began on July 10th, when the F.B.I. indicted two former high-ranking members of Rosselló’s administration on charges of corruption. Three days later, the Puerto Rico Center for Investigative Journalism, a nonprofit news organization, released more than eight hundred pages of leaked text messages sent between Rosselló and several men who referred to themselves as “brothers,” many of whom are sitting or former government officials. Puerto Ricans are used to corrupt government officials, but the chats indicated that they were amoral, too. In fewer than three months of conversations, the governor and his associates used sexist and homophobic slurs against the mayor of San Juan, Carmen Yulín Cruz; a former New York City councilwoman, Melissa Mark-Viverito; and the singer Ricky Martin. Rosselló himself insulted an overweight man who had taken a photo with him. Most damning, for the protesters, were jokes made about the dead of Hurricane Maria. “Don’t we have some cadavers to feed our crows?” the chief fiscal officer wrote.

The transcripts were a disgrace, but the governor appeared to think that he might weather the scandal. That Sunday, in penance, Rosselló went to the Calvary Church, an evangelical congregation in San Juan. Photographs showed members of the congregation placing their hands on him and praying. Rosselló went back to work, and the first protesters gathered outside of the Fortaleza. That Wednesday, an estimated two hundred thousand people made the march from the capitol to the Fortaleza, demanding the governor’s resignation. By Sunday, July 21st, as protests escalated, Rosselló announced that he would not seek reëlection.

“I have committed errors, and I have apologized. I am a good man, who has a great love for my island and everyone,” he said in a video posted online. As one T-shirt I saw put it, “We accept your apologies; now go to hell.”

This past Monday, hundreds of thousands of protesters filled the city, with sister protests held across the island. The world watched as the Puerto Rican people proved to be some of the most good-humored yet determined protesters in recent history. They arrived in fleets of bicycles, motorcycles, Jet Skis, kayaks, and horses. They organized children’s storytelling hours and yoga classes, performance-art shows, and voguing dance-offs. Every day, at eight o’clock in the evening, the entire island would erupt with noise—the cacerolazo—as Puerto Ricans leaned out of windows and doors to bang on pots and pans for exactly thirty minutes.

On Tuesday morning, Rosselló issued a noncommittal statement: “The people are speaking and I must listen,” he wrote. “These have been moments of total reflection and of making decisions that will be acted on in accordance with the concerns of the people of Puerto Rico and their best interests.” Later that afternoon, he announced the passage of a bill on Twitter, as if everything were proceeding as normal. Then he went silent. A source for the newspaper El Nuevo Dia had seen him go for a morning jog at the Dorado Beach Resort, where his father has a residence, surrounded by bodyguards.

On Wednesday, the midday forecast for the rumored resignation came and went. The newscasters stood waiting in front of the cameras, their makeup melting in the heat. “Dónde está Ricky? Ricky no está aqui; Ricky está vendiendo lo que queda del país,” the people chanted, as they would many times that day. (“Where is Ricky? Ricky is not here. Ricky is selling what is left of the country.”) On my phone, I read that a reporter from the Miami Herald had paid a visit to Rosselló’s father’s house in Virginia and reported seeing a police car speeding away with the windows blacked out. Had Rosselló fled to the mainland?