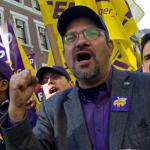 Far more than I would have liked in my years writing about labor, I found myself writing articles about corrupt union leaders, including one who embezzled $1.7 million and one who built himself an extravagant penthouse atop his union’s headquarters with two marble-walled bathrooms. And then there were the many uninspired and uninspiring union presidents who seemed allergic to doing any organizing even as the union movement continued its decades-long slide.

But when I went this past Wednesday to a packed memorial service at cavernous Riverside Church for Hector Figueroa, president of the 175,000-member SEIU Local 32BJ, I found myself deeply moved as one eulogy after the other talked of how many workers’ lives Figueroa had lifted, how many new union members he had organized, and how many people he had inspired. At least half a dozen times, the eulogists used a word rarely employed to describe today’s labor leaders: “visionary.” Figueroa, who headed the nation’s largest union of building service workers—representing doormen, janitors, security guards, and window cleaners—died July 11 of a heart attack. He was 57.

For many union leaders, one has to strain to list their achievements. But Figueroa’s were monumental. He was the key player for labor in persuading Governor Andrew Cuomo to enact a $15 minimum wage for the state’s fast-food workers. He was also labor’s point man in getting the Port Authority of New York and New Jersey to agree to a $19 minimum wage—the nation’s highest—for 40,000 workers at JFK, Newark, and LaGuardia airports. He was the key player in overseeing an organizing drive that unionized more than 15,000 workers at airports across the country—one of the largest unionizing successes in recent decades. Since he took 32BJ’s helm in 2012, it has organized more than 50,000 workers, most of them low-wage workers, many of them workers of color.

At the same time, Figueroa, a native of Puerto Rico, worked tirelessly to help his beloved island recover from Hurricane Maria and to fight austerity and corruption there. He helped engineer the demise of the Independent Democratic Conference—a group of turncoat Democratic senators who had helped keep Republicans in control of the New York State Senate even though the Democrats held more seats.

Figueroa repeatedly lent his union’s considerable power to assist others. To help the city’s nannies and housekeepers, he pushed the state legislature to enact the Domestic Workers’ Bill of Rights. To help taxi drivers pulled down by Uber, he pushed the city to place a cap on the number of app-based drivers. During the memorial service, taxis drove slowly outside the church, with signs saying, “Thank you, Hector.”

One eulogist after another pointed out that notwithstanding the whirlwind of union activity, Figueroa remained a loving, dedicated father and husband—sometimes canceling meetings to attend his daughter’s dance performances, introducing his son to calculus and economics when they weren’t trooping off together to Fight for $15 rallies or demonstrations against global warming.

“I am pretty sure that we all lost someone along the way, but I’m here to tell you, this one really hurt,” said Donna Hampton, a longtime security guard at JFK, choking up during her eulogy.

“Hector had a way of being in a room,” she told the more than 2,000 people in the majestic Upper Manhattan church. “He took his time to greet every member individually, and to ask and to really care in asking, ‘How are you? How is your family? What do you need?’”

Those at Riverside Church spoke of Figueroa’s humility, of how he was both soft-spoken and an amazing listener, of his deep connection with rank-and-file workers. “Our movement lost a giant who did not behave like a giant,” one speaker said. Kyle Bragg, who succeeded Figueroa as 32BJ’s president, described him as a “happy warrior who embodied so much of what is good and right in the world. With Hector,” he said, “we knew that his beautiful mind and his kind soul had still so much to give to us.”

This happy warrior could also be a fearless warrior and risk-taker. He crossed swords with many New York labor leaders and leftists when they opposed having Amazon open a new headquarters in Long Island City. Figueroa seemed confident that 32BJ could use its people power and political power to unionize Amazon’s warehouse in Staten Island. As The New York Times wrote, “Mr. Figueroa wanted a chance to get Amazon on 32BJ’s ‘home field,’ as he put it, where he could start organizing its workers.”

At the memorial service, Mary Kay Henry, president of the Service Employees International Union, 32BJ’s parent union, said Figueroa played a pivotal role in getting his two-million-member parent union to endorse the Green New Deal. “He called on us to lead the union movement to support the Green New Deal, to take on the interwoven climate crisis, of economic inequality and inexcusable racism, as the science and justice demanded,” Henry said.

Henry teared up repeatedly during her eulogy. “I don’t know how many of you locked horns with Hector,” she said. “I did, often and regularly. It was one of the gifts of our relationship. It is one of the things I will miss the most about him. I loved to get into honest, open discussions with him about strategy and direction. His intellect was formidable.”

“He taught all of us how to disagree in ways” that helped to “improve everybody’s thinking,” Henry added.

When I first met Figueroa nearly 20 years ago, I, too, was immediately impressed with his intellect. I must confess that I initially thought his head was too high in the intellectual clouds for him to become a good, down-to-earth labor leader. Boy, was I wrong.

Figueroa repeatedly proved his mettle as an organizer, working on the Amalgamated Clothing Workers’ effort to unionize Fieldcrest Cannon in North Carolina in the early 1990s and later organizing public employees in Puerto Rico. At 32BJ, Figueroa (along with his predecessor, Mike Fishman) turned the union into a much-admired organizing dynamo—in an era when too many union leaders shrink from undertaking the vital but often arduous task of organizing,

For my upcoming book, I interviewed Hector about the Fight for $15, because 32BJ had played a big, behind-the-scenes role in getting that effort off the ground. It was an interview like few others—Figueroa was fiddling with science-fiction action figures on his desk as he analyzed various mobilizing strategies and possibilities, dissecting their strengths and weaknesses. He’d throw in some historical analogies, and suddenly a joke or two.

In discussing the first wave of fast-food strikes in late 2012 and early 2013, Figueroa said (in a quote I used in my book), “It was like the garment workers’ strikes of the early 20th century. It really captured the imagination.” How many labor leaders would know to compare the Fight for $15’s first strikes with the famous Uprising of the 20,000 female garment workers in New York in 1909 and the Lawrence textile strike of 1912?

Figueroa’s mind was a wonder to behold. So was his energy.

Inspired in part by Figueroa’s repeated push for New York to take the lead in expanding workers’ rights, de Blasio is pressing the City Council to make New York the first place in the nation to mandate two weeks’ vacation for every worker in the city. “We need to pass this law this year to honor Hector Figueroa,” de Blasio said. “Hector would say to us, once we pass that law, then we have to go pass it for everyone else because that’s how he thought.”

Eric Rudin, co-chairman of the Rudin family’s giant real-estate management company and a top official with New York’s Realty Advisory Board on Labor Relations, also delivered a eulogy. Rudin—whose group negotiates contracts with Local 32BJ for hundreds of commercial and residential buildings—said that Figueroa “was a very different type of leader than the person I expected to see. He was gracious and soft-spoken. He was self-effacing and charming, and he had an excellent sense of humor. Hector quickly put us all at ease.”

Rudin said that when Figueroa laid out 32BJ’s goals at the start of negotiations, “it was immediately clear how remarkably thoughtful, articulate, and passionate he was.” Rudin said Figueroa wanted to “create a win-win situation for everyone.” In New York, the 32BJ doormen earn nearly $55,000 a year on average.

Rudin noted that many union leaders like to negotiate up to and often past the midnight strike deadline (even when they could have clinched a deal days earlier) in order to demonstrate to union members that they have pushed to the max to the very last minute—a strategy that often causes huge stress for management and workers alike.

“But Hector followed his own drumbeat,” Rudin said. “When he and his team determined several days before the deadline that a fair deal had been reached, Hector had the courage to shake my hand and tell me, ‘We can all go home and catch up on our sleep.’”

Ana Maria Archila, co-executive director of the Center for Popular Democracy, praised Figueroa for having an expansive view of what unions should do. “Hector believed that the spirit of a union and the promise of a union lives not just inside the halls of a union and in winning contracts. That promise is realized when the people in the communities where the workers live can live with dignity, can thrive, and can be happy.”

Archila recalled a meeting she had with Figueroa to discuss how to help Puerto Rico recover from Hurricane Maria. “He told me a story that moved me to pieces,” she said. “People across the island were putting out little dishes with sugar so that bees that lost their source of nourishment could survive. He understood that we belonged together. He believed fundamentally that we can’t be free unless we understand that we belong to each other and that we depend on each other, and that we have to care for our homes, our country, and our planet.”

During the service, a 90-second video was shown. It started with Figueroa joyfully dancing in a hallway with union members, shouting “32BJ, 32BJ” and “Labor united will never be defeated.” Then, from a recent speech he gave, Figueroa’s voice crescendoed, his soft voice turning into a lion’s roar.

“What is at stake for us as a union is not just to build 32BJ, is not just to build power for working people,” he said. “It is to save our country. It is to make a fight by all the people. It is to save the future: my children, your children, our grandchildren deserve better. And we have the power. We have the organization. We have the ability. We have the will to take to the streets, to bring our members to register, vote, organize, march, and take back this country so the forces of evil don’t destroy what our forefathers did. The dream of America is a dream that is real. The people can see hope. Se puede. Si, se puede.”

Steven Greenhouse was a New York Times reporter for 31 years, including 19 as its labor and workplace reporter. He is author of Beaten Down, Worked Up: The Past, Present, and Future of American Labor, to be published by Knopf in August.