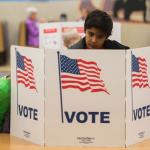 “Abolish the Electoral College,” Bernie Sanders recently tweeted. The Senator’s statement was in response to an op-ed authored by The Cook Political Report’s Dave Wasserman, who posited that though President Donald Trump suffers from a low national approval rating, the Electoral College could still hand him a victory. Earlier in the day, The New York Times’ Nate Cohn penned a similar analysis, estimating that the president “could win while losing the national vote by as much as five percentage points.”

No matter the question—be it “Should we reelect the racist?” or “Is health care a right or a privilege?”—we can’t receive an answer if the election is not an accurate representation of the national will.

Earlier in the year, the topic of how we elect the president briefly garnered widespread news coverage after Massachusetts Senator Elizabeth Warren, at a CNN town hall, called for the elimination of the archaic executive branch electoral system. The news cycle moved on and the national conversation soon dampened to a whisper, but we cannot let the discussion die. The likelihood a president will be elected with a minority of the popular vote could increase moving forward, and that would further undermine the legitimacy of the Oval Office—perhaps irreparably.

As both Wasserman and Cohn note, demographics are a driving force behind a potential electoral vote–popular vote split in 2020. But less reported is the effect of the war over voting rights.

Across the country, states under Democratic control are passing pro-voter reforms, such as automatic voter registration, same-day voter registration, or preregistration for 16-year-olds. At the same time, GOP-controlled states—including some swing states—have passed regressive, anti-voter legislation. These measures, such as voter ID laws and burdensome registration requirements, when paired with aggressive voter-roll purges, decrease turnout.

This voting-rights divide threatens to become more extreme with additional democracy advances in blue states and repression in red states. When this disparity encounters the Electoral College, it could translate to staggeringly unrepresentative election results. Democrats will continue to expand their popular vote margin while the GOP will hold power disproportionate to their dwindling share of the vote.

Opponents of change argue that the Electoral College was meant to protect smaller, rural states from the tyranny of urban population centers, so there is no cause for alarm. But, because almost all states award electoral votes in a winner-take-all fashion, our presidential elections actually render small and rural states irrelevant.

The swing states, due to their electoral significance, also have a stranglehold on national policies. The coal industry, for example, has outsize influence because of its prominence in Pennsylvania. So, too, does the ethanol industry because of Iowa. Moreover, U.S. tariffs have disproportionately benefited industries located in swing states, and the battleground states have historically received more in federal grants than the rest of the country.

You can’t have a “more perfect union” if you have an imperfect election. Republican and Democratic voters should both be able to agree that this anti-democratic system—one that promotes minority rule determined by a random set of swing states—has no place in the twenty-first century. No party should expect to benefit forever from a system that perpetuates inequality and inaccuracy.

The obvious solution is an amendment to the Constitution to abolish the Electoral College. In 1969, there was actually a noteworthy effort to do exactly this, but, after success in the House, it failed in the Senate. Apart from another attempt in 1979, an amendment has been, and continues to be, a pipe dream.

Fortunately, there are statutory solutions afoot to get closer to a fair count.

The National Popular Vote interstate compact (NPV), for example, is a coordinated campaign to get states to pledge their electoral votes to the winner of the national popular vote. The agreement would only go into effect once enough states, comprising a majority of electoral votes (270), join.

Currently, 15 states and Washington D.C., representing 196 electoral votes, have entered the compact. Four states—Colorado, Delaware, New Mexico, and Oregon—joined this year, a sign of accelerating progress. Two more states, Nevada and Maine, should have been on this list—but, after NPV advanced through the legislature, Nevada’s Democratic governor Steve Sisolak unexpectedly vetoed it, and, although it passed the state Senate, Maine House Democrats voted down NPV after bizarrely voting to advance it days prior.

There is no pathway for the compact to go into effect before the 2020 election—but 2024 remains a possibility. First, Maine and Nevada will have to come back into the fold. Then, if the Democrats (or reform-minded Republicans) win enough state legislative races in a combination of Virginia, Minnesota, Arizona, North Carolina, Pennsylvania, Michigan, and New Hampshire—all states in which this is potentially feasible—NPV could be pushed over the finish line.

But each state need not wait for the others to realize concrete changes in advance of 2020. All states can better ensure that every vote counts in presidential elections by implementing what is known as ranked choice voting (RCV).

In 2018, Maine became the first state to implement ranked choice voting for primaries and federal (non-presidential) elections. This year, a group of Maine legislators, led by State Senate President Troy Jackson, pushed to expand the program to include the presidential primary and general election. If Jackson’s expansion were to become law, the awarding of Electoral College votes could no longer be skewed or disrupted by third-party candidates.

Pine Tree State reformers are close to victory. Both the state House and Senate approved the bill, but the legislative session came to a close before the bill could be sent to the governor’s desk for approval. Advocates are not giving up and are working on a game plan to get RCV enacted by the 2020 general election.

While ranked choice voting would not eliminate the basic inequalities built into the Electoral College, it would ensure that, if states continue to allocate electoral votes via winner-take-all, the candidate that wins a state is actually the candidate that has majority support.

There are some questions about what would happen to the use of ranked choice voting if the national popular vote actually went into effect. But FairVote CEO Rob Richie tells The New Republic that reformers are working on both congressional and state-based solutions to deal with this potential scenario.

Had approximately 60,000 votes in Ohio flipped from George W. Bush to John Kerry in 2004, it’s possible that the Electoral College would have already been changed or abolished. If Ohio had been awarded to Kerry, Bush would have won the popular vote while being deprived of an electoral vote majority. This would have marked consecutive elections in which the system failed to produce the small-d democratic winner and may very well have spurred a bipartisan demand for reform. Instead, Bush won reelection and now one party is clearly benefiting from this anachronistic institution.

To both parties, the words of Thomas Jefferson now serve as a reminder and a warning. “Institutions,” he wrote, “must advance also to keep pace with the times. We might as well require a man to wear still the coat which fitted him when a boy as civilized society to remain ever under the regimen of their barbarous ancestors.”

The Electoral College has been an ill-fitting layer for a long time. For the sake of our democracy, it’s time to throw away the coat.

Adam Eichen is co-author, along with Frances Moore Lappé, of Daring Democracy: Igniting Power, Meaning, and Connection for the America We Want (Beacon Press).

New hope for the civically exhausted