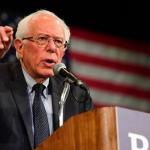 After Bernie lost the Democratic nomination in 2016, much of the Left felt that it was in a bind. Trump was a proto-fascist nut bag, but Clinton was a neoliberal hack. Many took their line from the liberal commentariat: Trump can’t possibly win (just look at him!). Therefore, the argument went, the Left is under no obligation to campaign against him, and hence for Clinton.

Adoloph Reed Jr., Arun Gupta, and Nelini Stamp were among those on the Left to make passionate public pleas to “support the neoliberal warmonger.”

The labor left, of course, made a clearer calculation. The Communications Workers of America, fresh on the heels of successfully striking Verizon and being the largest trade union to support Bernie Sanders in the presidential primary pivoted to fight Trump, pouring its ample resources into swing state efforts for Clinton. The composition of the courts alone makes the general election fight vital to the labor movement. The Working Families Party and Labor for Bernie did the same.

The effort of course, fell short. Donald Trump has now been our president for three years, and it’s not good.

I find myself constantly torn by how to characterize this administration. Living in a society that has put more people – disproportionately Black – in cages than any other in human history, it’s hard to see Trump as a rupture per se.

But on the other hand, he is a qualitatively different president than any we’ve seen in the past century. I’ve settled on the term “wanna be fascist” to describe him, but I increasingly wonder if I should drop the “wanna be.”

I hardly need to list the behaviors: child separation, concentration camps at the U.S.-Mexico border, U.S. troops used for civilian policing. And the “send her back” hate rallies, leading to death threats of a sitting Congressperson.

Lest we be calmed by Trump’s obvious incompetence, it turns out that Adolph Hitler was incompetent too.

While some are stumping for Warren – the only other candidate in the race who regularly articulates a conflict with the ultra-rich – most of the left appears to be fighting for Bernie Sanders to win the Democratic primary. There is ample evidence that Bernie can win, and I just love his plodding, principled attack on the ruling elite of our society. I, too, am a Bernie guy, and I fear that the planet itself is at irrevocable risk if we don’t put him in office.

But if we give it everything we’ve got and Bernie loses, the Left absolutely must follow the lead of Bernie himself, the Communications Workers of America, and many, many, many other individuals and organizations, and continue to fight Trump through the general election. This may mean riding a horse that makes us deeply uncomfortable. Personally, I’d feel good about Warren and Inslee, and nauseous about the rest.

At its recent convention, the Democratic Socialists of America expressed this nausea about the rest of the Democratic field in the form of a resolution prohibiting the organization from formally backing anyone other than Bernie in the general election. Unsurprisingly, the term “Bernie or bust” made its way to a New York Times headline about DSA. I found the resolution off the mark for many reasons (What if Stacy Abrams entered the race and jumped in the polls? What if Bernie and Warren enter a brokered convention as allies?), but as a practical matter DSA is not a cadre organization: Its nearly 60,000 members vote with their feet, and what they and the rest of the Left will do in the unfortunate event of a Sanders loss is still an open question.

We must, in my view, fight our nausea at the bulk of the Democratic field, pivot tactically if Bernie does not win the nomination, and keep up the electoral war against Trump.

The nausea is completely understandable: even if working people and Black Americans made their biggest gains in the last century under Democratic rule in the 1930s and 1960s, Democratic politicians have been far from strong allies, especially during the neoliberal era. Clinton gave us NAFTA, Welfare Reform, and continued mass incarceration. And just this year, we witnessed the right wing of the party outmaneuver Speaker Pelosi to pass a Trump spending bill through the House – the Democrat’s only lever of power in Washington D.C. – providing billions in unrestricted funding to the president’s concentration camps.

And it goes without saying – but why let it? – that presidential elections are far from our only tool to fight against fascism and for a democratic economy and society. Movements, direct action, and strikes are in many ways the root of our power. Down ballot races are potent too: Alexandria Ocasio-Cortez has demonstrated how much a single congressional seat can do change the national conversation. And 2020 is a census year, meaning that the political composition of state houses will immediately translate into the shapes of our districts for the next decade.

Yet at the same time, the difference between a Democratic and Republican White House is unfathomably significant for poor and working people: the courts, the National Labor Relations Board, the tax rate, and simply the prospect of any meaningful social legislation. Under Trump, of course, putting any Democrat in the White House means an essential step toward pushing neo-Nazis and White Nationalists to the margins.

The U.S. two-party, presidential system is an odd and rigid one: it requires us to build our coalitions in the electorate rather than in government. If we lived in a parliamentary system, the Left could fight like hell for its congressional votes, and then use its leverage in government to help select a prime minister. But in the U.S. system, if we lose the primary – if Bernie loses the primary – our only hope at keeping a “wanna be fascist” from the most powerful position in the land is to fight him as part of an electoral coalition for a centrist Democrat. Not nearly as emotionally satisfying as parliamentary politics, but every bit as important.

Three years out, I can forgive those on the Left who were silent in the 2016 general election, and even those who were publicly opposed to supporting Hillary. The liberal commentariat was convincing, even to the Left: I certainly thought a Trump victory was unlikely.

But now we know better.

Trump can win, and he may well. It’s on us to do everything in our power to make sure he doesn’t. If we fail, you can be damn sure that “wanna be” will be an irrelevant modifier in term two.

Luke Elliott-Negri is a doctoral candidate in sociology and is active in the labor movement.