No More Steubenvilles: How to Raise Boys to be Kind Men 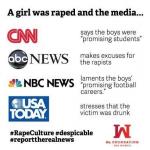 When Max was just a few months old, I sat cross-legged on the floor with him in a circle of other mothers.  The facilitator for our "Mommy and Me" playgroup would throw a question out to the group, and we would each volley back an answer.
"What quality do you want to instill in your child?  What personality characteristic would you most like for your son to be known for?" she asked.
One by one, the mothers answered.  "Athletic", "Good sense of humor", "Brave", "Smart", "Strong".
The answers blended together until it was my turn to speak.  I looked down at the tiny human wiggling around on the blanket in front of me, his perfectly round nose, his full lips that mirrored mine.  I stroked the top of his very bald head, and said with confidence: "kind".
I want my son to grow up to be kind.
The eyes of the other mothers turned toward me.  "That's not always a word that you hear used for boys" one said.  "But yes, you're right ... so I guess, me too".  At the end of the day, we wanted our tiny, fragile, helpless baby boys to grow up to be kind. Strong, resilient, athletic, funny ... but above all else, kind.
Max is almost 4 years old.  He knows nothing about the horrific things that young men did to a young woman on the saddest night that Steubenville, Ohio, has ever seen. He doesn't know, but I sure do.  I know that someone's daughter was violated in the most violent way possible, by someone's son.  By many sons.  The blame for that night falls squarely on the shoulders of the young men who made terrible choices, but it also falls in the laps of their parents.
Sexual assault is about power and control.  But it is also about so much more.  While it's true that big scary monster men sometimes jump out of bushes to rape unsuspecting women, most rapists look like the men we see every day.  Acquaintance rape (or date rape) accounts for the majority of sexual assaults among young people: in colleges, in high schools, at parties, in the cars and bedrooms that belong to the men who women trust.  These men are your fraternity brothers, your athletes, your church-going friends.  They are somebody's son.
Date rape is often saturated with entitlement.  It feeds off of the hero worship that grows rampant like weeds on school campuses and in locker rooms.  Young men are taught to be strong, to be athletes, to be feared.  Young women are taught to be meek, to be feminine, to be small.  As our young people begin to sort out relationships with each other and relationships with alcohol, they encounter an endless menu of ways to hurt each other.
As a community we give our athletes free rein.  Young men are filled with the heavy power of triumph, their heroism illuminated by the bright lights of a brisk Friday night football game.  Young cheerleaders spend hours painting signs for them, adorning hallways with fluorescent notes of encouragement.  Young men are known by their football number, their last touchdown pass, their ability to get any girl they choose.  Young women fill the stands with hopeful smiles, dying to be noticed.
We have created this.  We have allowed this.  We choose not to demand more from our young men, because we see how big they grow in the spotlight.  We give them adult power, without instilling in them an adult sense of responsibility and ethics.
It is time.  Now is the time to make this stop.  If you are the mother of a son, you can prevent the next Steubenville. It doesn't matter if your boy is 4 or 14 or 24.  Start now.
We must teach our boys to be kind.