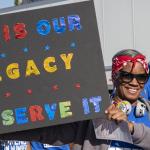 The Auto Workers' bargaining for 150,000 blue-collar workers at the Big Three auto companies was further complicated August 28 when the FBI raided the homes of UAW President Gary Jones and former President Dennis Williams. The FBI had search warrants for six locations in Wisconsin, Missouri, Michigan, and California.

The union had already seen four officials including a vice president (plus the widow of a vice president) convicted of graft arising from the UAW's joint “training” center with Fiat Chrysler. The union has operated similar centers with Ford and GM for decades, a source of make-work jobs for loyal appointees.

UAW members were waiting for the shoe to drop at the other two companies. Then three weeks ago a former top assistant to Vice President Cindy Estrada in the union's General Motors Department was charged with taking $1.99 million in kickbacks from vendors for UAW swag, such as 50,000 "Team UAW-GM" jackets. He has pleaded guilty and is cooperating with authorities.

As is UAW practice, union leaders including Jones have been silent about bargaining goals, with no information trickled down to members. Although the union holds a Bargaining Convention, that gathering passes an “omnibus” resolution that does not get specific or prioritize.

Is the union aiming to close the gap between first- and second-tier workers? Concerned about onerous work schedules and overtime? Looking to restore COLA? Focused on the four plants GM announced for closing last year? Would it accept concessions to reopen those plants?

Routine strike votes were taken at the three companies in August. All passed with their usual votes in the high 90 percents. On September 3, the UAW announced that GM would be its first target—the union chooses one company at which to bargain the pattern, which the other two will follow. Contracts expire at midnight September 14.

Some members speculated that union leaders might call a brief strike as a demonstration to the feds that they were not bought off by corruption. Others hoped that deepened mistrust in leaders would encourage members to vote no on a bad tentative agreement, as Chrysler workers did on the last contract in 2015—winning gains for workers at all three companies.

Labor Notes asked material handler Sean Crawford, who works in the body shop at GM's Flint Truck Assembly, how co-workers saw the bargaining and the prospect of a strike. Crawford is at his third GM plant in nine years, having transferred to escape the most recent plant closing plan.

Labor Notes: Is the corruption scandal affecting how people feel about the leadership, the contract, and the possibility of a strike?

Sean Crawford: Absolutely. Nobody benefits from having a weak leadership at a time like this except the company. It makes me furious—these guys have been going against the very values that are supposed to have formed the union, helping your brothers and sisters, being on the ground floor with them.

These people are in their ivory tower, living lives of luxury at our expense. It's disrespectful to the people who gave their lives to build this union in the first place. Instead of being an inspirational organization that people want to join, people look at the union as fat cats.

There are a lot of folks out there who do have the same hopes for bargaining gains that I do. It's just that the voices of cynicism have grown noticeably louder after the corruption scandal.

Is that general cynicism from years of not getting good contracts or because of the recent corruption?

A combination. Ever since 2007 when the union let two-tier in, the union hasn't been the same. [In that contract wages for new hires were cut in half and they lost pensions and retiree health care. –Editors] Now we have a philosophy of cooperation with management.

I have a “Team UAW GM” jacket from 2011, with the GM logo and the UAW logo next to each other. My grandma [who was a GM worker] would not have understood what planet those people were from who designed that jacket.

What are GM workers saying now that GM has been named the target?

Some people are ready to walk out and get back what we lost. Some say things like, “They're not going to call a strike, we're not going to get anything, they're in cahoots with management.”

I think we can win something. We need to win something. We've been struggling for a really long time. GM is in a very strong position financially, and the UAW could be looking to get back concessions to show they're not as corrupt as the membership currently suspects.

What has the UAW done to prepare members for a strike?

Not nearly enough. Everything is very top down; you have to wait for direction from [the International]. There's not a lot of room for worker input. We didn't have a union meeting all summer. We get our information from the same sources as anyone else.

These are the issues Sean Crawford says the UAW should be addressing in 2019 bargaining:

Jane Slaughter is a former editor of Labor Notes and co-author of Secrets of a Successful Organizer.
Please Donate to Labor Notes!
Source URL: https://portside.org/2019-09-07/corruption-cases-auto-workers-complicate-bargaining