Convergence On the Right 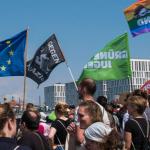 ″The right has changed; it has embraced the ideas of its outliers″, argues Dave Renton at the start of The New Authoritarians, Convergence on the Right. By embracing the outliers, Renton says, Trump and others have ″radicalised″ their conservative message.

At the same time Renton says, the left has failed to reassess the shape of the new right spectrum and have been weak on challenging its central ideas. The most important of these, for Renton, is its particular form of racism, how the ″right seeks to restrict welfare benefits to members of the [invented] national community, excluding migrants and Muslims.″ The weakness of the left has helped create the conditions for the right to flourish.

The New Authoritarians: Convergence on the Right

Renton has written a serious book, which should help the left better understand what it is up against He presents three detailed case studies of the shift to the right — in France, US and UK — on the grounds that these countries have a position to influence the growth of the far right in other countries.

In each of the “big three”, in the last period, there has been “the collapse of the old methods by which the centrist leaders kept themselves in power”.

In Britain the long-running campaign for British departure from the European Union, once the preoccupation of Tory cranks, has gradually been brought into the mainstream, through a Tory vanguard and UKIP, although Cameron gave that constituency a spectacular opportunity during the referendum.

In France, the centre-right (Republicans) and the left (Socialist Party) over years courted the votes of the Front National (now Rassemblement National) by, for example, supporting the ban on the veil; but this did not, as they calculated it would, succeed in undermining the Front. Marine Le Pen won 33.9% of the vote in the second round of the 2017 Presidential election. They did succeed in pulling mainstream politics to the right.

Trump′s partial incorporation of the conspiracy-theory right was initially a booster to his electoral ambitions. In 2011 he carved out space for himself against Barack Obama by claiming Obama was not an American citizen; then after his election he fully embraced that strategy by appointing Steve Bannon as his Chief Strategist. Events in Charlottesville forced him into sacking Bannon but he has continued to straddle what he sees as a winning combination of mainstream and far right politics.

What distinguishes this new right spectrum where electoral forces combine with the further right from fascism?

Renton defines fascism as a distinct and “holistic” mass political movement, headed up by a leadership cult, that wants to drive out any possibility of an “egalitarian order”; ergo a drive against the labour movement is key. This definition seems to be a less precise, or modernised, iteration of Trotsky’s analysis.

In contrast, Renton argues, the new right spectrum has fluid boundaries. Some groups, such as the MSI in Italy, have journeyed away from fascism – and Renton discusses this process.

Overall, the bigger elements at least of the new right spectrum are electorally-focused, rather than street agitators. They take their cue from the neoliberal era. They and do not see enlarged state power as the means to push through their programme. They do not try to “transcend class”.

That last part of Renton’s definition is debatable. A great deal of highly dangerous nationalist politics does aim to “transcend class”.

But Renton is right to try to make distinctions between the new right and fascism. Sometimes the fringe of this broader “new right” category, such as UKIP, can seem very fringe to our lefty eyes and ears. But they are not fascist.

UKIP, as Renton says, were “born from the Conservatives”. Renton’s concern, rightly, is that the component parts of the spectrum are shifting, and that there is a consequent overall drift to the right. We have to understand, relate to, and challenge the actual shifts.

One of the important contextual problems for the left’s challenge is the fading into distant collective memory of fascism and the Second World War (and, I would add, the role of the Stalinist USSR in the war).

One of the problems for us, as Renton points out, is that the historical experience of the war was never adequately dealt with in the immediate decades after.

Renton mentions the Kurt Waldheim story. Waldheim, who served as President of Austria between 1986 and 92, lied about his war record, claiming to have got a medical discharge in 1942. In 1986 the World Jewish Congress accused him of serving as a special missions staff officer in the German Army from 1942 to 1944 and being implicated in reprisals against partisans in Yugoslavia and Greece. There was a huge public scandal.

The “Waldheim affair” led to antisemitic statements by Austrian politicians, Austrian Jews leaving Austria (after a struggle to re-establish their community in the country), but also a public debate about the issues.

Public debate is precisely what is missing today, and generalised public ignorance is one of the reasons why a big part of the left erase, do not refer to, or simply do not pick up on, how the establishment of Israel was shaped by the experience of the Holocaust and continuing antisemitism after the Second World War.

Renton tracks the way in which the right has been shaped around anti-Muslim discourses. These are, he argues reasonably, based on exclusively on psychopathy, seeing Islamist terrorism as based various forms of anti-Western resentment, rather than political responses.

Unfortunately he has no better alternative analysis of Islamism. He sticks to the banal definitions of his Socialist Worker roots, pointing up only the “part played by Western military incursions in encouraging anti-colonial responses, including political Islam.”#

In fact political Islam is everywhere a quite localised phenomenon, a complex reaction to the different forms of domestic political bankruptcy. For example Al Qaeda was as much a reaction to conditions of the Saudi Arabian regime as anything, in which that regime’s support for western military adventures was just one dimension.

This seems to me to be an important flaw in an otherwise very useful book. Islamism is surely a stable part of the global right-wing spectrum, also feeding off its marginal elements, even if it doesn’t fit easily, or even at all, into the dynamics which Renton describes.

More than anything, argues Renton, the current elements of the new right spectrum are racists who are interested in erecting new and taller borders on the edges and inside societies – making strangers out of people who were once citizens, turning health professionals into border guards. Challenging and exposing those ideas is the left’s central task.

However, if, as seems true, hard-edge fascism is a minority position within today’s far right, what is the meaning, status and future of “anti-fascism” of “Antifa”? Renton does not tackle this problem of definition head-on but does make some comments about what the left should do.

Getting Labour elected at the next general election is going to be a huge battle. It will be a battle to ensure Labour has the policies that need to fight the new right. Far too slowly Labour (and now the TUC) have drifted into a quasi anti-Brexit position – against no-deal, for a second referendum with the option to remain.

But Labour needs to do much more, to clarify where it stands on actually-existing Brexit and to tackle head-on its racism, nationalism and anti-migrant agenda.

[Essayist Cathy Nugent is a frequent contributor to Workers' Liberty.]

Workers' Liberty is the publication of The Alliance for Workers' Liberty, a United Kingdom-based organization that describes itself as "fighting as part of the labour movement for a socialist alternative to both capitalism and Stalinism, based on common ownership and democracy." It can be reached here -  awl@workersliberty.org