Exposing Wage Theft Without Fear is Possible and Necessary 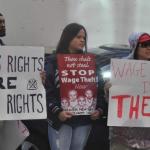 For more than five weeks now, coal miners in Harlan County, Kentucky have been camped out on railroad tracks, blocking a train loaded with coal, to demand that their bankrupt employer pay them their owed wages. Their story highlights the rampant nature of wage theft and the need to address it, along with retaliation, or the fear of retaliation, that keep millions of other workers silent.

Wage theft refers to the countless ways in which employers fail to comply with workers’ most basic pay protections. It includes, for example, an employer’s failure to pay the minimum wage or overtime, an employer’s refusal to pay a worker for all hours worked, asking workers to work off the clock, employee misclassification, illegal deductions, and stealing tips.

More money is lost every year to wage theft than to shoplifting, resulting in billions of dollars in losses to the economy and incalculable damage to the lives of millions of workers, their families, and communities. A 2017 study by the Economic Policy Institute (EPI) estimates that the total wages stolen from workers due to minimum wage violations exceeds $15 billion each year. Consistent with EPI’s findings, a recent survey of 2,000 adults commissioned by the Public Rights Project found that nearly 4 in 10 (39 percent) reported experiencing wage theft.

Wage theft is a problem that disproportionately affects women, people of color, and foreign-born workers. In a sample of over 4,000 workers, 30 percent of women experienced minimum wage violations compared with 20 percent of men. Nearly one in three Latinx workers were paid less than the minimum wage, compared to fewer than 1 in 10 (8 percent) of white workers; African-American workers experienced wage theft at three times the rate of white workers. Low-wage workers, in general, experience minimum wage violations at high rates across demographic categories.

To truly tackle the problem of wage theft, which almost always places on workers the burden and risk of coming forward to report violations, we have to simultaneously address the problem of retaliation. Countless workers feel fear at the thought of coming forward with concerns or complaints at work, and many studies show that workers have good reason to fear coming forward. Employers often retaliate or threaten to retaliate against workers for raising complaints. Low-wage workers, immigrant workers, and women workers are particularly vulnerable to retaliation from employers.

One survey of more than 4,000 workers found that of the workers who had made a complaint to their employer or attempted to form a union, more than 4 in 10 (43 percent) experienced one or more forms of illegal retaliation. An Alabama Appleseed and Southern Poverty Law Center survey of 302 workers found that almost 1 in 10 who reported an injury were, in fact, “fired or otherwise disciplined for being injured, missing work or seeing a doctor.”

One way to create the conditions necessary for workers to assert their rights and hold employers accountable is by ensuring that every state has strong retaliation protection laws in place. We simply cannot expect workers to risk their jobs or income to report employer misconduct when that loss can lead to everything from fines for missed payments, to eviction, to lower credit scores for late payments, to deportation for undocumented immigrants.

A recent 50-state survey by NELP of retaliation protection laws covering wage theft found that most state laws are too weak. The consequences for employers are often minimal and, in many cases, workers who report retaliation stand to recover very little even if they successfully prove retaliation.

Ultimately, retaliation and wage theft like that experienced by the Kentucky miners go hand in hand. To empower workers and their collective voice so that more workers can demand and secure justice, states must take the initiative in creating positive change through strong retaliation protections and hold employers accountable for violating worker rights.