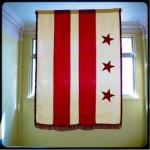 The House of Representatives held the first hearing on D.C. statehood since 1993. The point of the hearing was to jump-start the process to vote on (and likely pass) H.R. 51, which would make the District the 51st state. Dozens of statehood advocates were inside the hearing, including Barbara Mitchell who arrived at Capitol Hill around 7 a.m. and was one of the first in line.

“Statehood would give D.C. residents equal democratic rights,” said Holmes Norton at the start of the hearing, adding that H.R.51 has 220 co-sponsors but none are Republicans.

Holmes Norton introduced H.R. 51 in January, but will not be allowed to vote for it because she represents D.C., which is not a state. In addition to having a non-voting representative in the House, Washingtonians do not have any voting representation in the Senate. The District's 700,000 residents are disenfranchised, even though they pay more in federal taxes per capita than residents living in any other state, collectively $28 billion in 2018, and the District’s population is greater than that of Vermont and Wyoming. Factoids like these came up repeatedly throughout the hearing.

“Laws we pass are subject to review of this Congress,” said Mayor Muriel Bowser. “Our very existence can be wiped away from Congress.”

Guests were invited to speak on whether D.C. deserves to become the 51st state. The lack of statehood is preserved in the U.S. Constitution: Article 1, Section 8, Clause 17 of the document says “Congress shall have the Power To … exercise exclusive Legislation in all Cases whatsoever, over such District (not exceeding ten miles square) as may, by Cession of particular States, and the Acceptance of Congress, become the Seat of the Government of the United States.”

While the bill has zero chance in the Senate, it'd be unprecedented for H.R. 51 to pass the House. City Desk attended the statehood hearing, which lasted over three hours, and took notes for those who missed it. (Spoiler: One Republican was concerned about what H.R. 51 meant for congressional parking.) Here are the three major takeaways:

1. Ward 2 Councilmember Jack Evans wasn’t at the hearing, but he sure dominated the discussion.

“One should not read into absence,” said Mendelson, when questioned by Oversight Committee Ranking Member Rep. Jim Jordan (R-Ohio) about Evans for the umpteenth time.

At the start of the hearing, Jordan moved to subpoena Evans, who is at the center of an ongoing federal investigation and Council investigation. Holmes Norton said the scandals surrounding Evans have nothing to do with the statehood hearing, and asked to table the topic for now.

“Certainly officials in Ohio, if I may say so, have been the subject of multiple political scandals for many years including one from 2018 that I won’t go into detail,” said Holmes Norton. “No one has seriously questioned Ohio's fitness to be a state.”

She and others said Republicans’ repeated questions about Evans were being asked in bad faith. Rep. Jamie Raskin (D-Md.) called the questions the worst distraction.

“The claim seems to be, if one person in a jurisdiction gets in trouble, you disenfranchise the entire community. That cuts into everything we believe in about democracy,” said Raskin, to audience applause.

2. Lack of statehood is connected to racism and slavery.

It’s no secret racism played a role in D.C. disenfranchisement. When D.C. was stripped of local governance in the 1870s, Former Alabama Senator and Confederate soldier John Tyler Morgan said it had to be done to “to burn down the barn to get rid of the rats … the rats being the Negro population and the barn being the government of the District of Columbia.”

A rather heated exchange came when Rep. Gerry Connolly (D-Va.) said opponents of D.C. statehood are concerned that more black residents, who are more likely to register as Democrats, will be given representation in Congress.

Rep. Alexandria Ocasio-Cortez (D-N.Y.) also said the District’s lack of statehood is just another example of a policy enacted during slavery. And to continue to deny representation to Washingtonians is to deny the impact of slavery, she added.

“The issue of D.C. statehood is rooted in a different evil in our history, which is the history of slavery,” said Ocasio-Cortez.

The last state to be admitted into the union was Hawaii, in March 1959. President Dwight Eisenhower signed the Hawaii Admissions Act. Apparently, it was constitutional because of the under the Admissions Clause.

Republicans invited one witness to speak: Pilon, who questioned the constitutionality of H.R. 51. Rep. Jody Hice (R-Ga.) asked Pilon whether Congress has any authority to change the Constitution outside of constitutional amendment and he said none. (Notably, Pilon also said  “this body violates the Constitution on a daily basis.”)

But the ACLU conducted a legal analysis of H.R. 51 and said it “is a valid and defensible exercise of Congressional authority.” The organization isn’t the only one—many others have said H.R. 51 meets legal scrutiny.

“Congress should be assumed to have the power to pass a bill regulating the District, including H.R. 51 ceding much of the District to a new state. This is why Congress was able to retrocede part of the District back to Virginia in 1846, which the Supreme Court has upheld,” said Howard University’s Robinson Woodward-Burns, who was outside the hearing.

“The main limitation (which would require an amendment to change) is that the clause requires some area[s] be reserved as a seat of government. H.R. 51 satisfies this requirement by leaving a small area around the National Mall remain the federal District,” he told City Desk.

What remains under the jurisdiction of the federal District concerns Republicans—including Rep. Thomas Massie (R-Ky.), who was worried about his staff’s parking.

“Some of my staff actually park where the new state would be… and a lot of Congressional staff would park outside of the federal enclave—doesn't it seem like there will be some influence if congressional had to appeal to the new state to park,” Massie asked one witness. (Massie was met with snark on Twitter.)

Extra: D.C. residents don’t want to be a part of Maryland.

Krucoff is running for D.C. delegate on retroceding into Maryland. He was spotted inside the statehood hearing, trying to convince attendees of his views, including Sen. Kirsten Gillibrand (D-N.Y.). Gillibrand, who briefly attended the hearing to see if D.C. students she invited could get inside, brushed him off. She supports D.C. statehood.