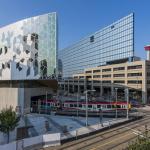 Last year, Calgary got a new central library. The building is a wonderful piece of architecture. But it’s also a place that brings people together, with programming for kids and teens, film screenings and talks, and advice on everything from how to build your career to how to live with depression.

And this, according to the American sociologist Eric Klinenberg, makes it “social infrastructure,” critical to our collective future. In his fine book Palaces for the People, Klinenberg coins the term social infrastructure for libraries, parks, schools and other public facilities that “shape the way people interact.” He’ll be speaking at two such facilities in Toronto on Sept. 11, the Toronto Reference Library and Evergreen Brick Works.

“The library is just as important as the highway,” he said in a recent interview from his home in New York. And using the term social infrastructure “identifies the crucial role libraries and parks play in our society. It moves them from being seen as luxuries into the nitty-gritty debate about critical systems, which is where they belong.”

Why? Because public places matter. And because bringing people together can literally save their lives. Klinenberg has seen the evidence.

In his book Heat Wave, he traced the impact of a brutal 1995 heat wave on people in his native Chicago. Two specific neighbourhoods on the poor South Side, “looked very similar on paper,” he explained, “but had very different results; one was among the deadliest and one was among the most resilient.”

The difference between the two was social infrastructure: well-maintained playgrounds and streets; also successful restaurants, stores and barbershops. “These are the things that drew people out of their homes so they got to know each other,” he said, “and so they could look after each other in a crisis.”

And more crises are coming, as climate change continues to generate extreme weather events. A community’s ability to pull together, which is known as social resilience, is only going to be more important.

But social infrastructure is tied to hard infrastructure – such as flood protection, building retrofits and transit – which is critical to dealing with the effects of climate change.

Klinenberg has been thinking about this while working with the U.S. Government’s Rebuild by Design program, and he argues for projects like the Big U in New York, which is meant to combine new flood protection with parks. “What could be just a simple sea wall makes life better for everyone,” he explained. In Canada, he cites the Bentway, a public space underneath the Gardiner Expressway in downtown Toronto, as an example of combining hard and soft infrastructure.

But there are other problems to solve. Already Western societies have record numbers of older people. Many of them are isolated. In Palaces for the People, he visits a public library in a low-income Brooklyn neighbourhood, where a team of patrons, aged 50 to 90, are bonding around a game of Xbox bowling. That kind of community-building is good for the soul and the body.

All this public life has to happen in a place. To some degree private businesses can and do provide the venue – Starbucks has become the cliche here. “But Starbucks is expensive,” Klinenberg points out, and a lot of people – such as two black men who were arrested in a Philadelphia Starbucks last year – can’t feel entirely welcome there.

"I don’t think we can rely on the market to provide us with gathering places that we need,” Klinenberg said.

This leaves public places. Schools, which he says should make their facilities open and welcoming to the surrounding community. Universities. Recreation centres. And libraries. The title of the book comes from a phrase that robber baron Andrew Carnegie used to describe the libraries he paid for in the U.S. and Canada. They’re still beloved.

But today’s billionaires aren’t funding libraries. Klinenberg’s argument cuts against the political tenor of the moment, especially in the U.S. He admits as much, but suggests that there’s a disconnect among many on the right: “Even diehard Republicans love their public libraries, and their parks and playgrounds and football fields,” he said.

So do Canadian conservatives. But we aren’t having a good public conversation on these subjects, so it’s good news that Klinenberg is ready to make the case here, too. “Even in countries with a social-democratic tradition, I think we need to make a robust case that public goods still matter,” he said, “and they can make a difference.”