Raising Dion Is A Charming, Supercharged Children’s Tale With An Identity Crisis 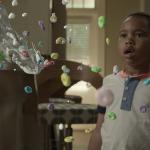 Raising Dion is an ostensibly different superhero story than we’re used to seeing. Rather than center a man grappling with the sudden responsibility of protecting the planet, our protagonist is a 7-year-old boy named Dion (Ja’siah Young) who is eager to understand his powers. His development is largely explored from the perspective of Nicole Warren (Alisha Wainwright), our young hero’s recently widowed mother. Executive-produced by Michael B. Jordan and based on the comic from Dennis Liu, Raising Dion carries the hefty duty of being two things at once: a supercharged origin story of a child who is only just beginning to navigate life’s biggest lessons, and the tale of a mother raising her son while still bearing the weight of grief. Series creator and writer Carol Barbee’s effort works best as a youthful point of entry into more complex subject matter. As a more mature story of a woman figuring out motherhood amid adversity, Raising Dion is clumsy and a little too simplistic, levitation and melting Legos aside. Because these two elements often clash, the series, as a whole, struggles to find a working balance.

Dennis Liu and Carol Barbee; based on Liu's comic book and short film of the same name

Contrary to many of his adult counterparts, Dion is not only excited about the onset of his powers, but is also emphatically ready to help humanity. Borrowing a lot of his ideas of heroism from comic books (as many kids his age would), he employs his godfather, Pat (Jason Ritter), as his mentor to help him better control his abilities while he busies himself with potential superhero names and suit ideas. Young brings such wide-eyed innocence and youthful determination to Dion that it’s contagious, making it a little easier to be patient with him as he repeatedly dives headlong into danger, all in the name of goodness. Part of his heroic journey involves real-life lessons as well. Through Esperanza (the abundantly charismatic Sammi Haney), a precocious classmate who is insistent on becoming his best friend, Dion learns about respecting the boundaries of others after a poorly assessed display of his powers that leaves her feeling violated. He also experiences his first recognized brush with systemic racism when a school administrator insists on punishing him for a crime he did not commit. Raising Dion is skilled in parsing down complex social systems for a younger audience, especially through Esperanza, who often compares her experience as a person with a disability to being invisible.

As for Nicole, the mothers of superheroes are often sacrificed to furnish heroes’ motives. Although Raising Dion only slightly modifies the trope by switching parents (this time, it’s the father who has died), Nicole’s struggle to keep everything together—from maintaining a job to preventing her son from destroying the apartment—is a change and a nice addition to a richer, evolving landscape for Black mothers on television. Wainwright’s performance inspires empathy, grounding Nicole’s extraordinary narrative and making it more accessible. It would have been ideal to see her stretch her limbs in meatier subplots instead of a fairly watered-down story about returning to the world of dance (including a nod to a sparkless romance that doesn’t serve much), but she handles her material well and easily has the most genuine presence throughout the series.

But what ultimately jeopardizes Nicole’s story—and Raising Dion as a whole—is the show’s inability to push (or even firmly nudge) boundaries in its effort to remain family-friendly. There are a number of missed opportunities to draw parallels between raising/protecting a child with superpowers and raising a Black child in today’s sociopolitical climate. Just when it seems like it might head in that direction, the story pivots before shaking any figurative tables (plenty of literally quivering furniture abounds, if that’s your thing). Nicole is also weighed down by a collection of confusing relationships, like the one with her sister, Kat (Jazmyn Simon), which flits from contentious to caring at whim, with little context and clunky dialogue. And then there’s Pat, her deceased husband’s best friend, who begins to build an increasingly lovely friendship with Nicole until he’s subjected to a twist that comes out of nowhere. Ritter, however, provides a very nice comedic balance and prevents the narrative from becoming dull, so there’s that.

It all rings like the collateral damage of a story with very distressed pacing, thanks largely to an execution that stretches the thin premise in an attempt to please two totally different demographics. Overall, Raising Dion makes for an exciting children’s show about tapping into your power in order to make the world a better place. With more focus and a little more nerve, the show could make incredible leaps and bounds.