How to Resolve the Chicago Teachers Strike? Tax the Rich. 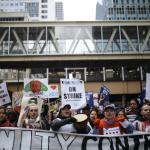 The past year of bold worker action in Chicago—which included the nation’s first charter school strikes—is now headed towards a crescendo as teachers and support staff prepare to walk off the job on Thursday.

Despite the city’s attempt to box negotiations into being just about salary, the Chicago Teachers Union (CTU) is bringing a holistic approach to bargaining to benefit both their members and students. This means bringing common good demands such as affordable housing and sanctuary schools into the contract negotiations, because CTU knows that the crises outside of the classroom directly affect student learning.

This approach also means making demands about how the schools our students deserve can be paid for, which is why community organizations, labor unions such as CTU and elected officials have worked together to put forward the #ReimagineChicago budget proposal. Our plan does not rely on increasing fines, fees, sales taxes, and property taxes on the working poor and middle class—as has so often been the norm in Chicago. Instead, we have laid out a package of progressive revenue solutions to counter decades of disinvestment in Black and Brown communities, and ensure that the wealthy and corporations pay their fair share.

This proposal amounts to a sharp break from how Chicago finances have long been handled—and a fundamental shift in who is prioritized in the budget. Nowhere is this clearer than in our fight for the reinstatement of the corporate head tax.

A head tax is a city tax on corporations that scales to the size of the company. Chicago previously had a head tax in place from 1973 to 2014, but it was eliminated by then-Mayor Rahm Emanuel, making clear his economic priorities. Partly to help make up for the lost revenue from eliminating the head tax, Emanuel closed half of the city’s public mental health clinics, devastating thousands of patients, among other cuts to vital city services. Our improved version of the head tax would generate more than enough money to reopen all of the public clinics, while helping expand affordable housing and creating jobs on the South and West sides.

As we wait to hear what Mayor Lori Lightfoot puts forward in her first budget, we know that the mayor and city council have the power to act on our proposals right now—which could generate $771 million in new revenue. Other progressive taxation proposals would require coordination with the state government, but they could bring in up to $3.9 billion, totaling $4.6 billion in new revenue. These solutions include a Real Estate Transfer Tax which would raise $150 million, a Luxury Goods and Services Tax which would raise $300 million, and a city income tax on incomes over $100,000, which would bring in a whopping $1.4 billion. This funding could address Chicago’s growing housing crisis, enable a full-time nurse in every school and create racially equitable conditions that would allow all Chicagoans to thrive.

The “bargaining for the common good” approach being taken up by CTU represents a two-fisted strategy to win the schools and neighborhoods that Chicago working families deserve. On one hand, Chicago teachers are forcing the city and the school system to codify commitments to improve Chicago schools by writing them into their contract. On the other, unions are working with community groups to win the money to pay for those improvements through progressive revenue solutions that make the wealthy pay their fair share, instead of regressive taxes and fines on working families.

Mayor Lightfoot has resisted on both fronts, claiming CTU should only bargain over salary and that the union’s demands to create equity in the school system would drain city resources. She’s also resisted committing to raising the revenue needed through our proposals. Yet her newly appointed school board passed a spending increase that nearly doubled the amount of money spent on Chicago Police Department (CPD) officers in the public schools, and for the first time put into writing a contract between the school system and CPD that mandates more police access to our schools without detailing where this new spending would come from.

Candidate Lightfoot ran on a progressive platform, especially around education, but as mayor, she’s acting in opposition to that agenda on a number of issues. Creating task forces instead of putting affordable housing commitments in writing is not enough. Taking the side of wealthy developers like Sterling Bay, and fighting organizations like ours—Grassroots Collaborative—that are organizing to win radical changes to the city’s broken Tax Increment Finance system flies in the face of her progressive commitments.

Taking on entrenched wealthy elites requires progressives in Chicago to fight on multiple fronts. This teachers strike is about more than just a contract—it’s about reimagining what is possible for our city if we tax the wealthy and put those resources into the hands of working people instead of the politically connected. As Chicago teachers and support staff take bold worker action to win a just city for all, we should rise to the moment and join them in the fight for a more just future.