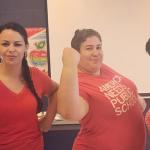 In 2012 the Chicago Teachers Union woke up union members and educators across the country with a winning strike. Seven years later, after a wave of teacher strikes in the last two years, CTU is at it again.

As educators walk out today, a lot feels like 2012. The strike authorization vote was high (94 percent) and the mayor is disparaging their demands and branding the strike as hurtful to children.

THIS TIME IS DIFFERENT

But there are noteworthy differences.

This time the union has extended its demands: it wants to tackle student homelessness and affordable housing for low-income Chicagoans.

And this time it is up against a new mayor—not the blatant corporate shill Rahm Emmanuel but liberal Lori Lightfoot, whose election platform promised support for the Chicago Public Schools. In spite of these promises, Lightfoot chose the same bargaining team that served Emanuel and is holding firm against the unions' demands.

Before the 2012 strike, Local 73 had settled a concessionary contract, and members crossed CTU picket lines. CTU once represented some of the SEIU members, and tension between the two unions had emerged. Management pays SEIU's starting special education assistants more than CTU's teaching and instructional assistants, although they do similar work. With new leadership in Local 73, tensions have been eased and communication among leaders established.

One moment of coalition solidarity came when CTU member and special education teacher Katie Osgood showed up at a Local 73 bargaining session. Osgood works closely with special education assistants and to show her support, she arranged with the leadership of each union to attend. Local 73’s negotiations are open to members.

Osgood came in her CTU jacket, was introduced to members, and sat in the back. When the Chicago Public Schools (CPS) team finally noticed Osgood, after two hours, they left the room to decide what to do. Local 73 members chanted, “Let her stay! Let her stay!” until the CPS team came back and announced they were leaving. The room burst into cheers.

“There was a lot of hesitation and distrust, “ said Osgood, “but that feeling of solidarity, that was important. I told that story to our CTU House of Delegates. People cheered.”

Many SEIU members work with students with special learning, developmental, or emotional needs. The average salary for custodial workers is $35,000 a year and for special education classroom assistants $36,000. That puts these workers below the Housing and Urban Development measure of “very low income.”

Isaac Krantz-Perlman, a substitute special education classroom assistant, describes a colleague who works with students all day, leaves to drive for Uber, works as a night-shift custodian, goes home to care for his elderly mother, sleeps, and heads back to work with students the next day. He says this is what the unions mean when they say “our working conditions are students' learning conditions.” Students need well-rested staff.

Local 73 is demanding pay raises, access to health benefits and paid vacations, an end to outsourcing, and more training for educators working with high-needs students.

Class-size caps, and the opening of a new classroom when numbers go over that cap, are central to CTU’s demands. The union is calling for more counselors and social workers, with lower caseloads, nurses in every school, and an expansion of the number of Sustainable Community Schools from 20 to 75. These are schools that give students a full array of wrap-around social services.

Lightfoot wants to keep the focus on the 16 percent salary increase over five years that the board has offered to CTU. The union insists it’s not just about the salary, but rather the quality of life for students and educators.

A challenge for the unions is holding their coalition together when they are bargaining at different tables, with different demands. The stress caused by an austerity budget for the schools and economic injustice in the city—for homeless students, for educators in overcrowded classrooms, for students without nurses or counselors, for educators who cannot afford to pay rent without working two or three jobs—is unifying them.

“If you have never been in a room with 40 children, you have no sense of that learning environment,” says Christine Dussalt, an elementary teacher. She says that reducing class sizes “resonates with all of our members in all of our schools.” Along with other members recruited as organizers for the summer, she spent time door-knocking all of the union's school representatives (delegates) or meeting them for coffee to talk about the demands and strike readiness.

Sixteen thousand Chicago students are homeless—they are the most obvious victims of high housing prices. But Chicago has residency requirements for city workers, which means high rents and home prices impact union members too.

Lori Torres, a teacher and bargaining team member who was born and raised and still lives in the Humboldt Park area, said she is watching her neighborhood become unaffordable. “Once people in CTU and SEIU saw that housing was a demand, their lived experiences told them there is a need for it,” she said. “We are having an exodus of black and brown people.”

CTU wants the mayor to put these commitments in the contract. They are connected to the union's demands for how to pay for them: increase the corporate “head tax,” which taxes corporations with more than 50 employees for each employee. Use Tax Increment Finance (TIF) money for schools and housing instead of for corporate mega-developments like Lincoln Yards that are further gentrifying Chicago. Support a proposed millionaires tax that would raise taxes on income over $1 million.

CTU points out that in 2017, Illinois passed a new school funding formula that has meant more than a billion extra dollars for CPS each year. The legislation “channels more resources to CPS to lower class sizes, provides more supports to English language learners, addresses high levels of trauma among students, supports low-income learners and special education students, and provides wrap-around supports to students in need,” the union says.

But somehow, according to the union, “CPS will spend less in this year’s record $7.7 billion budget on classroom resources than it did last year.”

The mayor insists that housing and staffing are not germane to the contract. The basis for this claim is a 1995 state law that limits bargaining to pay, benefits, and the length of the school day. But CTU Vice President Stacy Davis Gates said in an interview with PBS that the union has a responsibility to use “the leverage of an enforceable contract” to help get Chicagoans the city they deserve.

In a city as complicated as Chicago, coming together around different needs to hold strong for shared demands takes work. Torres notes that making sense of demands that impact different people in different ways takes time and lots of listening. “It is our job to have conversations with people whose perspectives are different from our own,” she said. “I have an opinion based on what my colleagues teach me. It’s about trusting those whose experiences have led them to put this demand forward that allows us to fight for it together.”

The unions have held joint strike trainings and an “art build,” in which students, parents, and educators from both locals created protest signs. On Monday, with the strike date looming, 1,000 union members marched through downtown in CTU red and SEIU purple.

But as the strike begins, the strength of these relationships will be tested. Can union members dare to ask so much from their city, for their city?

Krantz-Perlman says he sees variation across school buildings about how much communication there is between Local 73 and CTU members. But, he says, they are learning from each other: “This is going to set Local 73 up for an even stronger effort next time around. People realize that we can strike, mobilize power, get active. If we make a thousand mistakes this time around, that is useful.”

CTU taught other unions about strikes and power in 2012 when members struck and beat Rahm Emanuel. That teaching and learning has continued, with the 2018 “red state revolt” educator strikes in West Virginia, Oklahoma, and Arizona and those in Washington state and Colorado. This year, teachers struck in Oakland and Los Angeles; the LA union, UTLA, won on class sizes and immigrant rights. This time is different. Chicago is learning from others.

“We keep telling ourselves, “ says Dussalt, “UTLA won nurses in every school. We can do this.”

For four decades Labor Notes has offered activists a ringside view of labor's ups and downs.

Whether we're reporting on a struggle across the street or around the world, Labor Notes delivers the best labor news and analysis available.

A must for anyone interested in putting the movement back in the labor movement.