Kickstarter's Employees Want a Union. Will the Company Continue to Oppose Them? 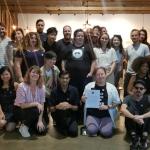 The majority of workers at crowdfunding site Kickstarter have now asked their company to voluntarily recognize a union. Kickstarter has previously made it clear that it opposes unionization and will actively fight against it. A flurry of negative responses from Kickstarter’s users, including me, have made it clear that the company’s position is highly off-putting to a large number of the people it depends on. Now, Kickstarter has a chance to do the right thing and unionize. Doing so would not only be ethical, but it would set an important precedent that could help rebuild the devastated American labor movement.

If you had told me a few weeks ago that I would soon be entangled in a campaign against Kickstarter along with Neil Gaiman, Anita Sarkeesian, Molly Crabapple, and Richard Herring, it would have sounded like something out of a strange dream. Early last month, the magazine I run, Current Affairs, began a fundraising campaign on Kickstarter, which has long had a reputation as a powerful crowdfunding platform and an important tool for artists, inventors, game developers, and all kinds of independent creative types. Our magazine had started through Kickstarter back in 2015, and so this year we decided to use it again when we needed some more funding for new projects.

Then, in the middle of our fundraising campaign, the news broke that Kickstarter had fired two union organizers in eight days. The company claimed the firings were performance-related, but nearly half-a-dozen inside sources cast doubt on this. It turned out that labor unrest had been brewing in Kickstarter for a year, with the company aggressively opposing union organizing efforts.

As a left-wing magazine strongly supportive of the labor movement, we were unsure what to do. We didn’t want to partner with a union-busting company, and we immediately started receiving questions and criticism from supporters. Kickstarter takes a percentage of all money raised, so a portion of supporters’ dollars might end up going to lawyers and PR professionals fighting against the Kickstarter union.

Current Affairs joined together with two other Kickstarter-funded magazines, Pinko and Protean, and put out a statement condemning the company for its anti-union tactics. Then we got a surprise: dozens upon dozens of other creators wanted to join us. Soon 450 Kickstarter project creators, who had collectively raised over $50 million on the platform, had banded together. These included people like Gaiman, Sarkeesian, Crabapple, and Herring, who had been some of Kickstarter’s most prominent public success stories.

The widespread disgust of project creators does make sense: as a platform, Kickstarter is designed for underdogs, people who don’t have much money on their own, but who might just be able to pull off something cool if they could get a few thousand dollars together from a few hundred friends, relatives, and strangers. Many are the type of young progressives who know what it’s like to struggle in a rigged economy, and they’re naturally sympathetic to workers’ demands for a union.

Before now, Kickstarter had fought against unionization and fired organizers, but the union hadn’t actually requested recognition. Now, that has changed, as Kickstarter United formally asked to be recognized. Kickstarter thus faces a stark choice: will it continue to fight against its own workers or will it end the controversy by voluntarily recognizing a union?

Unions are critical to the success of American democracy. Unionized jobs not only have higher wages and better benefits, but unions give workers a much-needed voice in how their companies operate. They shift the balance of power away from rich owners and executives, so that ordinary employees have some protection from arbitrary abuses of power. That’s why corporations fight against them so hard, and why the decline of unionization has corresponded with the rise in American inequality.

If Kickstarter became a union company, it would be the first of the major tech companies to do so. That would set an important precedent in an industry people thought would never unionize. It could inspire low-level workers at companies like Google and Amazon to believe that they, too, might be able to organize for a greater voice in the workplace.

Kickstarter is technically a public benefit corporation, meaning that corporate decision-making is supposed to be based on more than just the pursuit of profit. Unfortunately, the company’s executives haven’t seemed to take that mission very seriously. Now that the union has asked for recognition, the company has a chance to show which side it’s really on.

Project creators on Kickstarter are an eccentric and independent-minded bunch. But we share a belief in the right to a union. Kickstarter can either drive us away by continuing to be anti-union, or show it wants us to stay by granting its workers the union they deserve.

Nathan Robinson is the editor of Current Affairs. He is also a Guardian US columnist.